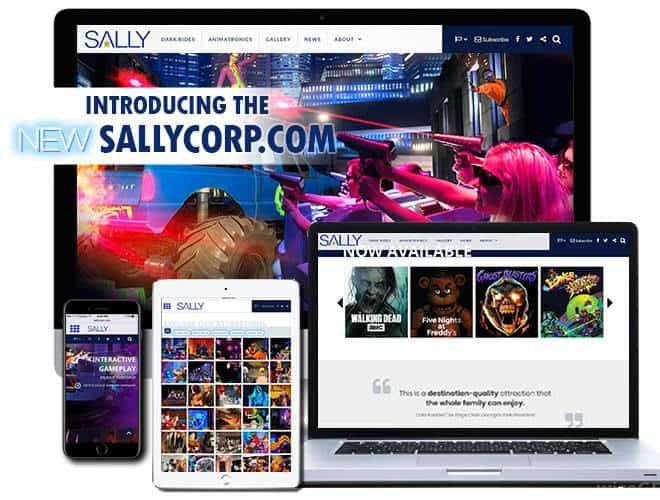 Sally Corporation is celebrating their 40th anniversary with a revamped website featuring their dark ride creations.

For four decades, Sally Corporation has been building dark rides for theme parks across the globe, and now fans can explore the company’s legacy through a newly revamped website launched in celebration of the manufacturer’s 40th anniversary.

Attraction fans may adore big rollercoasters and carnival-style spinning rides, but “dark rides” are what truly separate theme parks from amusement parks and fun fairs. Dark rides are typically indoor attractions in which a small car (or boat) takes riders through a series of shows scenes that use scenery, props, special effects, and theatrical lighting to tell a story. Dark rides got their start with Old Mill and Pretzel rides at seaside amusement parks in the early 20th century, but the artform really exploded with the opening of Disneyland in 1955. Original opening-day Disneyland attractions like Peter Pan’s Flight and Mr. Toad’s Wild Ride proved hugely popular, and led to later masterpieces like Pirates of the Caribbean and Haunted Mansion.

While Disney is most associated with the genre, their Imagineers aren’t the only folks capable of building world-class dark rides. Founded in 1977 by CEO John Wood with John Fox and John Rob Holland, Sally Corporation started out manufacturing animatronic figures for department stores and Chuck E. Cheese before moving into dark rides. Over the years, Sally has built the E.T. Adventure ride for Universal, Scooby Doo rides for Six Flags, and Nights in White Satin for the ill-fated Hard Rock Park. Most recently, Sally has provided well-received Justice League interactive shooting rides for Six Flags.

The newly revamped Sally Corporation website features photos and videos of their product line for visitors to explore, including previews of the proposed Walking Dead and Five Nights at Freddy’s attractions that Sally has advertised at recent IAAPA conventions.

“We’re excited about our new website launch and the robust information it offers customers, partners and media,” said Lauren Weaver, Marketing Director for Sally Corporation. “We designed it to be an innovative, educational ride through our history, our processes and our people. This site will grow as Sally continues building innovative, immersive, interactive attractions for theme parks and entertainment facilities worldwide.”