SeaWorld gets into the movie making business with ‘Turtle: The Incredible Journey’ 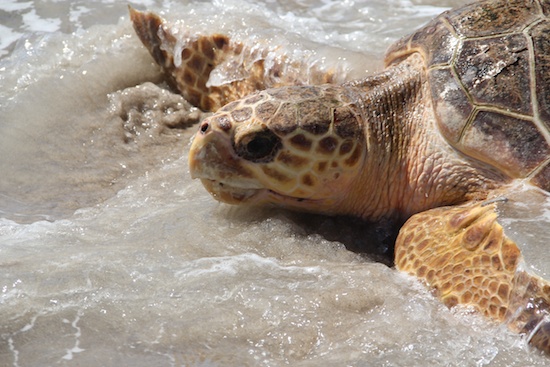 Turtle: The Incredible Journey is an award-winning film that follows the life and migration of a loggerhead turtle from hatching to maturity and a return to its original Florida nesting grounds. The loggerhead turtle, a threatened species, has one of the longest and most difficult migratory patterns of any marine animal: Sea turtles newly hatched on the East Coast of the United States (usually in Florida) make their way from the sand into the ocean, and then begin a voyage that can span the entire Atlantic Ocean, only to return decades later to that same beach.

“This is a remarkable story crafted by one of the world’s most gifted documentary filmmakers,” said Scott Helmstedter, Chief Creative Officer for SeaWorld Parks & Entertainment. “Turtle: The Incredible Journey does what our parks have been doing for more than five decades: inspire, enrich and entertain. Helping bring this film and its powerful message of the fragility and beauty of our oceans to the public is what SeaWorld is and what we have always been about.” 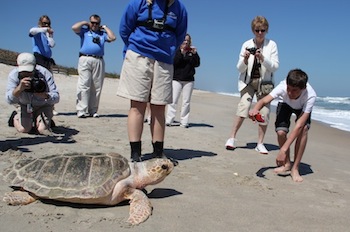 Stringer’s documentary team follows the loggerhead turtle on an adventure of more than 9,000 miles guided only by instinct. Stringer and his camera crew spent two years following loggerhead turtles on their trips across the ocean, and have captured on film the remarkable life cycle of a beautiful creature that struggles to survive in an increasingly unforgiving environment.

The film is narrated by Academy Award nominee Miranda Richardson, and will be released to theaters in both standard theatrical formats as well as 3D in selected locations. Initial theatrical markets set for June 24 include New York, Los Angeles and theaters near three primary SeaWorld locations: San Diego, San Antonio and Orlando. The film’s official premiere is scheduled for Tuesday, June 21 at the large-format 3D theater at SeaWorld in San Diego.

Expansion plans call for the release of the film to additional theaters and cities throughout July and August, with a target of more than 200 locations.

SeaWorld Pictures was formed in April 2011 to create and distribute original and partner-produced film content that advances the company’s mission to “celebrate, connect and care for the natural world we share through the power of entertainment.” SeaWorld Parks & Entertainment, a portfolio company of The Blackstone Group, plays host to 23 million guests each year and employs 20,000 people nationwide. The company, headquartered in Orlando, owns and operates three SeaWorld parks, Busch Gardens Tampa, Busch Gardens in Williamsburg, Va., Discovery Cove and Aquatica in Orlando, Adventure Island in Tampa, Water Country USA in Williamsburg and Sesame Place in Langhorne, Pa. near Philadelphia.

UPDATE: The movie will be playing in Orlando at:

Here’s the trailer for Turtle: The Incredible Journey:

Thanks for the clarification.