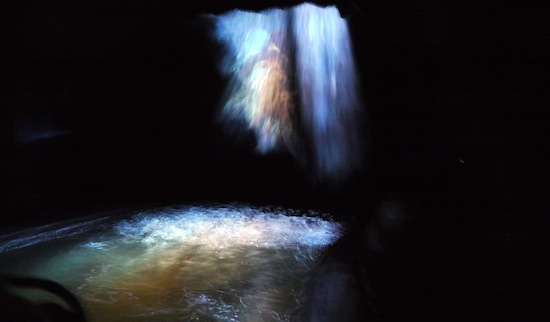 A new pirate will be appearing in the Pirates of the Caribbean ride at Magic Kingdom. Starting on May 20, the projection of Capt. Blackbeard will replace Davy Jones on the fog waterfall in the attraction. 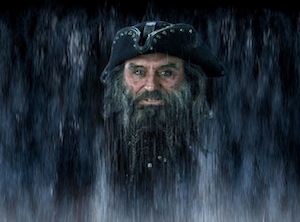 The Disney Parks Blog reported that actor Ian McShane, who plays Capt. Blackbeard in the upcoming “Pirates of the Caribbean – On Stranger Tides” movie, recently came to a studio in L.A. in full Blackbeard costume to record his “ghostly” segment. The smaller photo here is a representation posted on their blog.

But if you like Davy Jones better, don’t worry, Blackbeard appears as a promotion for the movie. Disney reports that Davy Jones will return later this year.

Also look for Capt. Blackbeard in the ride at Disneyland.

UPDATE: Reader Daniel Mcneely submitted this photo of Blackbeard already projecting in the Disneyland version of the ride. 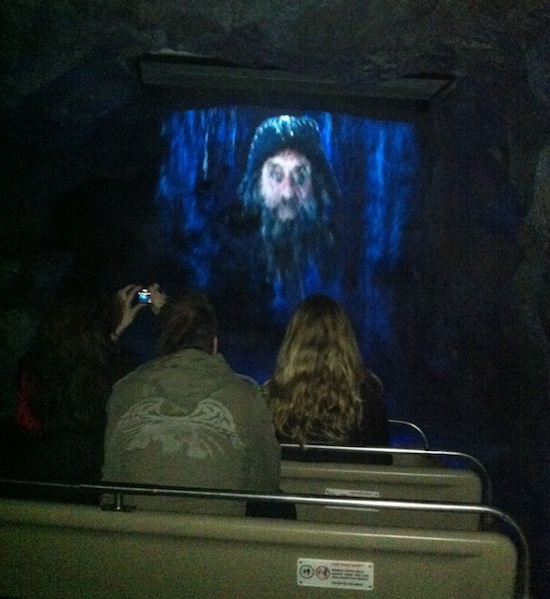 SeaWorld gets into the movie making business with ‘Turtle: The Incredible Journey’

I rode POTC at Disneyland on Saturday night and they had the Blackbeard projection going. Here’s how He looks on the ride.

Thanks Daniel. Looks good. Do you remember what he says?

I don’t recall what He says. I was side tracked trying to pull out my phone in time for the pic. (The POTC4 Premiere just ended so I think that’s why they had the projection going)

Does the ride do anything more than float on the river, i.e. Drop

Really good blog, thank you so much for your effort in writing the posts. Take some time to check out my site it might be of intrest to you on stranger tides

Throw a home premiere for ‘Scoob!’ with...