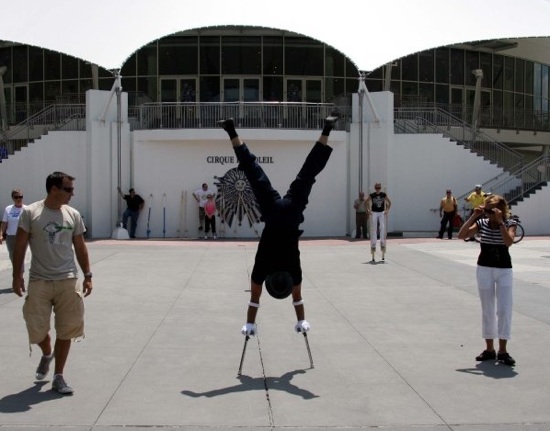 Some of the stilt walkers practicing at Downtown Disney. Photo courtesy of facebook.com/LaNouba

The company is organizing public events, including in the streets of Québec, where it all started back in the days of the Échassiers de Baie-Saint-Paul (the Baie-Saint-Paul Stiltwalkers), a street theatre group founded by La Nouba Director of Creation, Gilles Ste-Croix. In the spring of 1980, Ste-Croix walked 56 miles on tall stilts from Baie-Saint-Paul to Québec City to raise money for a group of street performers that would soon influence the founding of Cirque du Soleil.

To honor this momentous occasion and the roots of Cirque du Soleil, the cast and crew of La Nouba, along with Orlando Mayor Buddy Dyer, invite the people of Orlando and visitors to witness the stilt walk. The event takes place from 4 to 4:30 p.m. outside the La Nouba theatre at Downtown Disney. The mayor will be on hand to proclaim June 16 ‘Cirque du Soleil Day’ in Orlando.

Disney On Ice will be celebrating this September in Orlando

Getting my camera gear now and heading over to downtown disney!