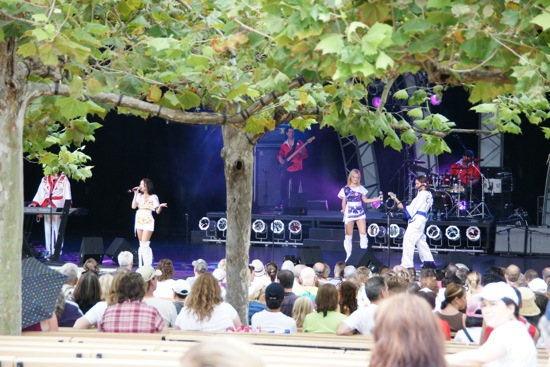 The whole family can boogie down at Epcot starting tonight as popular tribute bands take the stage throughout the summer at the America Gardens Theatre.

Seven tribute bands will recreate classic hits from musical icons under the stars as part of the Sounds Like Summer concert series. Concerts, which are included in regular Epcot admission, are nightly at 5:45, 7 and 8:15 p.m.
(except July 4, when show times will be 5:15, 6:30, 7:45 and 9 p.m.).

Is this an ABBA tribute band? Looks like it. If so, that totally rocks!

The picture is of an Abba tribute band from last year. They were supposed to be back this year but were later replaced with 52nd Street.

I saw a full-on ABBA tribute back at Hard Rock Live a few years back, and they were amazing!