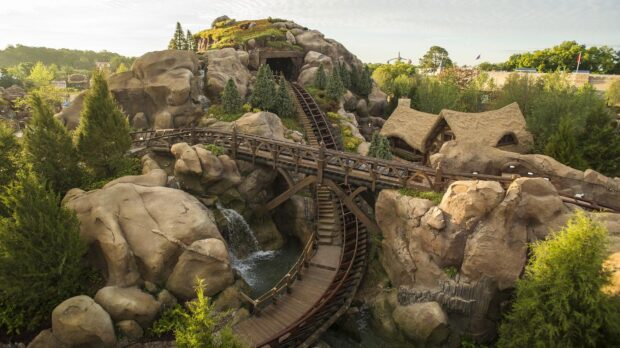 The final addition to New Fantasyland is gearing up to open as work on the Seven Dwarfs Mine Train comes to an end, giving guests a look at the entire mountain. We were able to ride it as part of a special media event put on by Disney. UPDATE: The ride will officially open on May 28, 2014.

The family-style coaster features first-of-its-kind ride vehicles that swing back and forth during the ride. Adding to the fun, the journey is accompanied by music from the classic film and scenes filled with Snow White, the Seven Dwarfs and playful forest critters.

The experience begins as guests cross a stone bridge and walk through a beautiful forest with the Dwarfs’ cottage in the distance. Then, they step into the attraction entrance and into the timeless story of Snow White and her forest friends led by the Dwarfs.

After passing through an interactive pre-show area with fun activities themed to mining, guests will proceed to the mine train. Picks, shovels, barrels and hoists are scattered throughout the queue tunnel and at the load-in area.

Guests board the specially-designed mine cars and launch into their journey through the mine. Each “train” consists of five mine cars, which seat four guests each. The individual mine cars are designed to reflect similar vehicles that appear in the film, hand-made of wood by the Dwarfs, shaped by an axe, and used to haul rocks and jewels.

As guests twist and turn through the mine, the cars rock back and forth, adding an extra family-friendly thrill element. Riders tour through the cavernous mine’s winding track, jutting outside to climb and dip through the wooded landscape, and then re-entering the mine at different points in the attraction.

Here’s a complete ride-through, including the final scene:

As with any classic Disney “dark ride,” the Seven Dwarfs Mine Train features several Audio-Animatronics, with the train slowing down so guests can spot favorite characters making an appearance in different scenes.

See the official dedication ceremony for the Seven Dwarfs Mine Train below:

• Seven Dwarfs Mine Train is almost completely “on stage.” With its location in the middle of New Fantasyland, guests aboard the rockin’ coaster are afforded amazing views from all angles.

• The Dwarfs cottage is a detailed representation of the cozy home seen in the classic film, down to the wisteria vine and birdhouse at the front door.

• The two vultures perched on the jib crane near the mine entrance are styled after the vultures in the film and originally appeared in the Snow White’s Scary Adventure attraction.

• The individual mine cars are designed to reflect similar vehicles that appear in the film, handmade of wood by the Dwarfs, shaped with an ax, and used to haul rocks and jewels. Hand-hammered metal bands and nails are used to bind the wood. In the film, the mine cars sit in a cradle that allows them to be tipped to unload their contents. Here, the cradle design allows the cars to swing back and forth as they carry riders along the winding track.

• The innovative, patented ride system for the Seven Dwarfs Mine Train is an original design developed at Walt Disney Imagineering. It features five-car trains designed to swing independently from side to side as they move along the track. This newly patented design provides a one-of-a-kind ride experience.

• Next to Doc’s workstation in the mine, the carved wooden clock is a replica of the one seen in the film with the figures of two miners striking an anvil. As in the film, that motion signals the start of the beloved song, “Heigh-Ho.”

• The jewels seen throughout the mine come in four different sizes and six different colors: red, green, amber, purple, blue and clear.

• The shadows of the Dwarfs marching homeward along the track on the lift inside of the mine were rotoscoped from the scene in the original film where the Dwarfs march across a log bridge, singing “…home from work we go.”

• In the last view of the cottage, around the corner of the far wall, the Wicked Queen can be seen in her disguise as an old hag watching Snow White and the Dwarfs through a cottage window. She turns toward the train as it passes, and cackles wickedly.

Below you can see our video when footage for a commercial was shot, featuring extras riding the Mine Train:

This is awesome!! The witch at the end legitimately gave me the creeps. Makes for kind of a dark ending by today’s Disney standards (and I like it!)

I can hardly wait as it looks like a lot of fun. Going to WDW in September.

Another great story ride for WDW everyone will enjoy