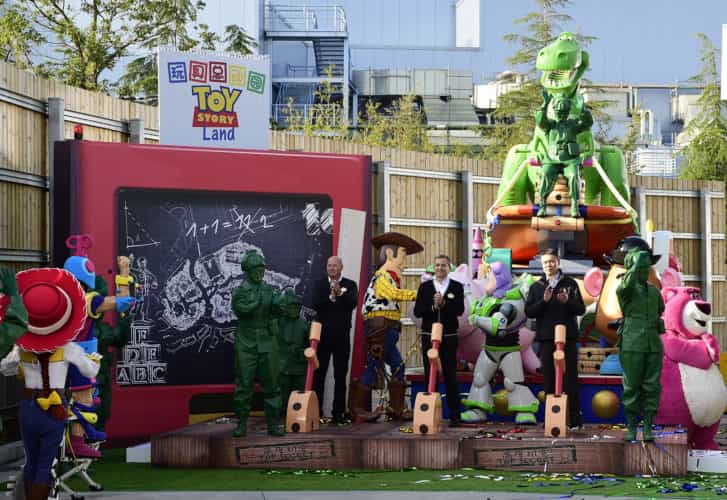 Ground has been broken for Shanghai Disneyland’s Toy Story Land.

Shanghai Disneyland recently broke ground on Toy Story Land, and the first major expansion to the recently opened park will debut in 2018.

Bob Iger, chairman and chief executive officer of The Walt Disney Company, along with Bob Chapek, chairman of Walt Disney Parks and Resorts, and Fan Xiping, chairman of Shanghai Shendi Group, celebrated recently breaking ground on this new expansion, which will open in 2018.

Development of the Toy Story expansion began even before opening Shanghai Disneyland, and Shanghai Disney Resort already has the only resort hotel in the world dedicated to the characters and stories from Toy Story.

Toy Story Land at Shanghai Disneyland will be “both authentically Disney and distinctly Chinese,” making it a one-of-a-kind experience for our guests. Everyone’s favorite toys from one Pixar’s most popular franchises ever will come to life and play in a fully immersive land with three attractions and a themed character greeting area.

Details have not been revealed on what those three attractions might be, but the latest rumors point to clones of the RC Racers and Slinky Dog Spin flat rides found in Hong Kong Disneyland and Walt Disney Studios Paris, plus a Woody-themed stage show and cafe.

For more about Shanghai Disneyland, check out our YouTube videos of the resort, starting with this look at the park’s opening day: