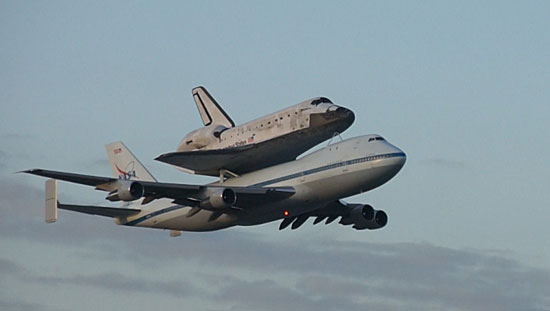 Thousands of Space Shuttle fans watched as the shuttle orbiter Discovery left Kennedy Space Center on a 747 jet yesterday morning. Discovery’s destination was its new home at the at the Udvar-Hazy branch of the Smithsonian Institution, at the Dulles Airport. 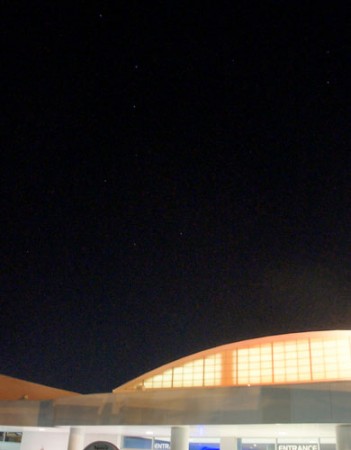 A few dozen fans were in line at the Kennedy Space Center Visitor Complex at 4:30 a.m. While waiting, they enjoyed this view of the Big Dipper above the entrance building. 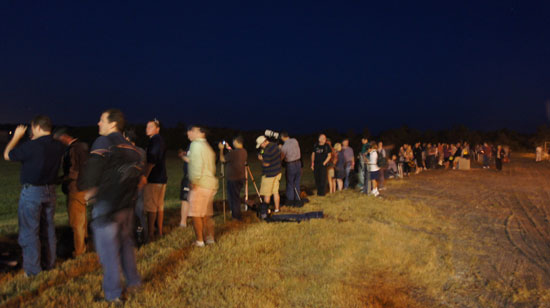 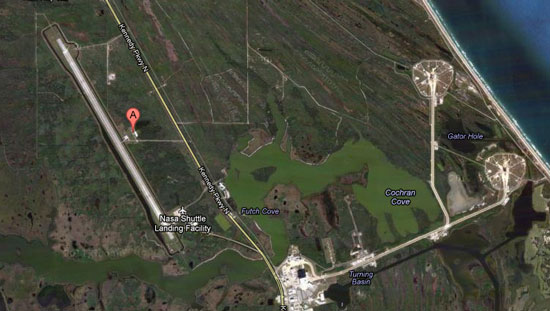 Special tickets were for sale for the best viewing location, at mid-field of the Space Center runway. “A” marks the location as seen in Google Maps (enter 28.616144 -80.690536 there to zoom in closer). 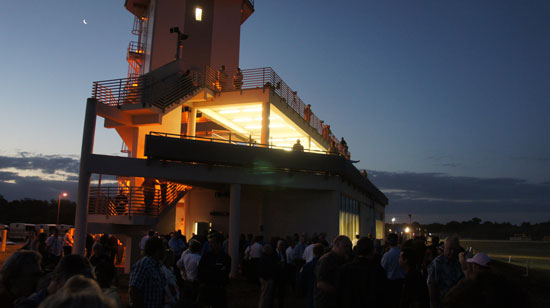 High-ranking Space Center employees and other VIPs watched from the tower area. 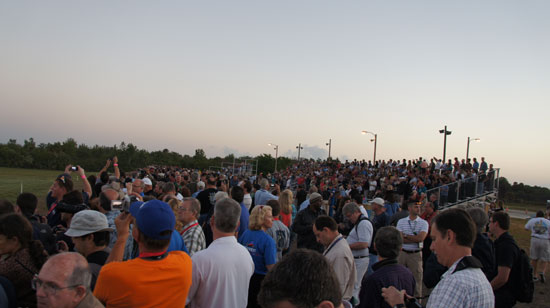 Additional employees and guests with the special ticket filled the adjacent grandstand area. 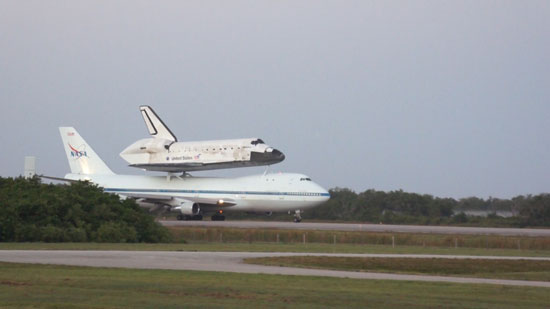 We could hear the 747’s jet engines getting closer, and soon we could see Discovery taxing above the treeline. 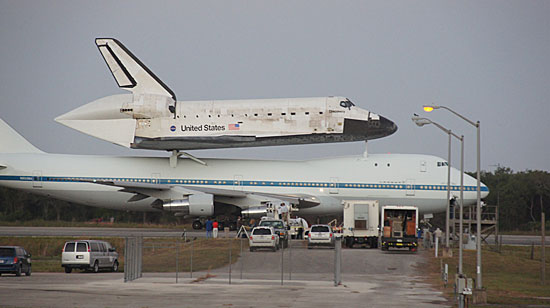 The 747 then paused for a few minutes, allowing us to take close up photos. 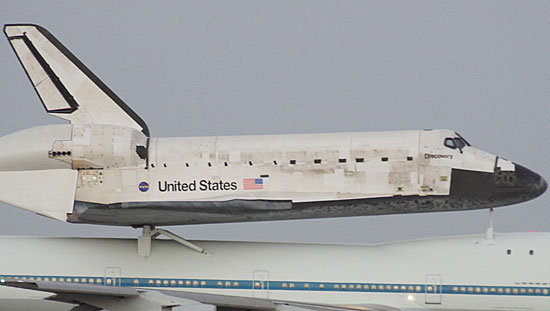 The tiles and protective fabric exterior was not replaced after Discovery’s final spaceflight, so all the burn marks from re-entry remain. 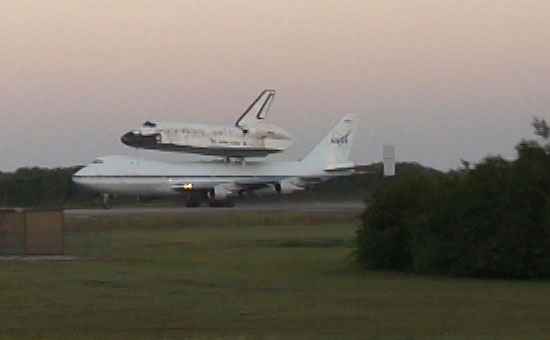 The 747 then went to the north end of the runway, gained speed and began Discovery’s final flight. 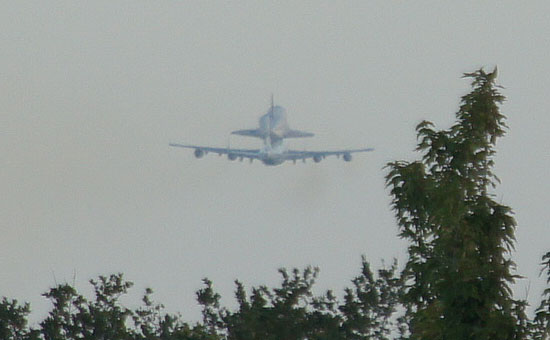 Over a period of about 25 minutes, the 747 took Discovery on three farewell sweeps. They first flew over the Cocoa Beach coastline to say goodbye to fans waiting there.

The 747 circled back to fly over fans at the Visitor Center, and also over the Kennedy Space Center Industrial area for employees watching there. 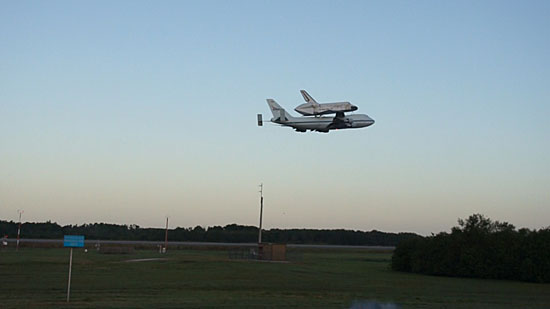 Finally, the 747 flow Discovery over the runway, for the final farewells.

We have video of Discovery’s farewell here:

Space Shuttle Discovery's final flight, aboard a 747 from Kennedy Space Center to the Smithsonian 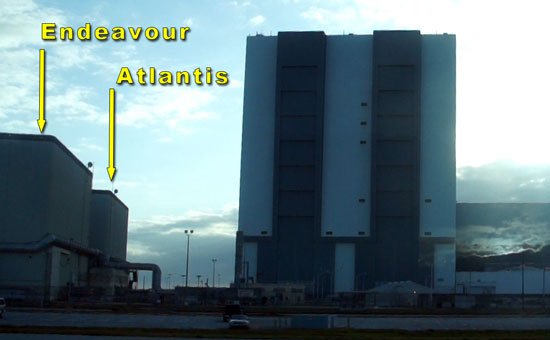 According to the bus driver, the other two orbiters are currently in these buildings. Endeavour will be flown to Los Angeles. Atlantis will remain at the Space Center, in a new exhibit building. 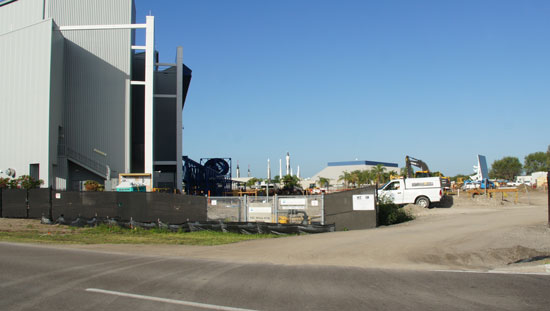 The exhibit building for Atlantis is under construction here. 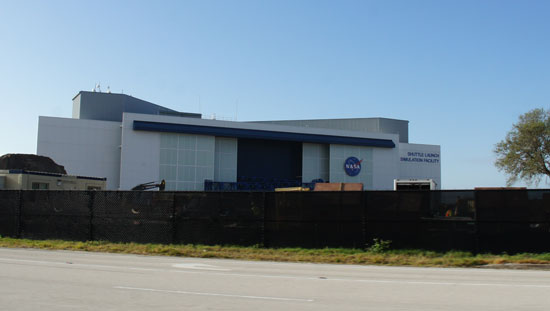 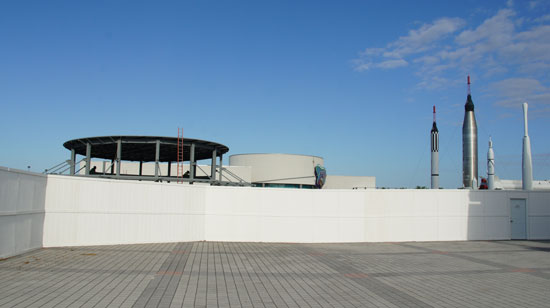 Other construction is also visible at the Visitor Center’s conference facility.

Here’s a video from three years ago, when the end of the shuttle program began:

The Orange Bird makes his return at Disney’s Magic Kingdom

So long, Sorcerers – The Attractions Podcast