With the holidays on our heels and Mickey’s Very Merry Christmas Party returning to Walt Disney World on Nov. 8, a new Sorcerers of the Magic Kingdom party card has been introduced – inspired by Walt Disney’s Enchanted Tiki Room. 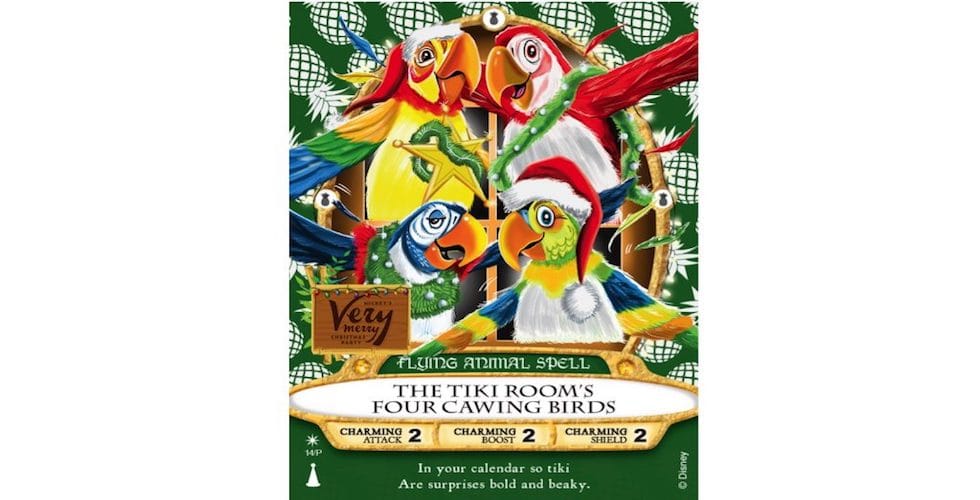 A look at this year’s Christmas Party card!

According to Imagineer Jonathan Ackley, this year’s exclusive card was created by Merlin the Magician after he met a quartet of singing birds in the tropics.

“These charismatic avian performers inspired Merlin to create a new charm to give his acolytes for the year’s holiday celebration,” said Ackley. “The Disney Villains will need to watch our, or they’ll end up with egg on their faces!”

Sorcerers of the Magic Kingdom is an interactive card game where guests team up with Merlin to help defeat Disney Villains as they attempt to take over Magic Kingdom. Guests locate various villain hideouts throughout the park, and visit magic portals where they will use their spell cards to defend against the villain’s attack. Each spell card features a different Disney character with their own unique powers.

The game begins at the Firehouse on Main Street, U.S.A., where guests can pick up complimentary spell cards and maps of the magic portal locations. Additional cards and game mats can be purchased at select merchandise locations throughout Walt Disney World.

A look back: Guests rock their Disney...