Disney Theme Park Merchandise is introducing a new trading card game in August that is based on Sorcerers of the Magic Kingdom. This at-home game includes a way to obtain those super rare spell cards plus a whole bunch more. 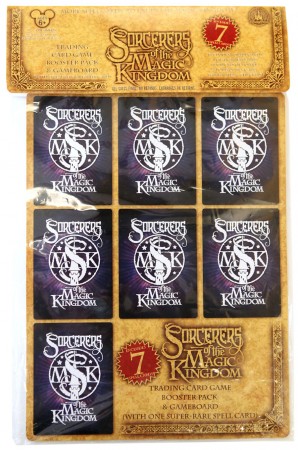 “We wanted a way to extend the magic found with the Sorcerers of the Magic Kingdom experience beyond the park,” explained Cody Hampton, Associate Developer for toys and games. “We created a trading card game that allows guests to use the cards from their in-park experience in a whole new way at home.”

“We worked closely with Walt Disney Imagineering while creating the game,” said Disney Design Group Artist Quynh Kimball. “They provided images from the in-park experience for the at-home version. There are four different game boards featuring Maleficent, Dr. Facilier, Jafar and Cruella DeVil. Much like the in-park game, the goal is to work together as a team to get the villain’s power level to zero. The game rules are very thorough but easy to understand. I think anyone ages six and up will have a fun time playing.”

A new mystery pin set is also planned for release later this year.

Check out our video highlighting all 70 of the cards:

The game will be released at several Walt Disney World Resort locations, and it will be carried via the online Disney Parks Store at a future date. The entire trading card game set which includes the booster pack of seven cards, one randomly selected game board, and tokens will be $11.95 each. Click here for more information on the official Disney Parks Blog from Steven Miller.