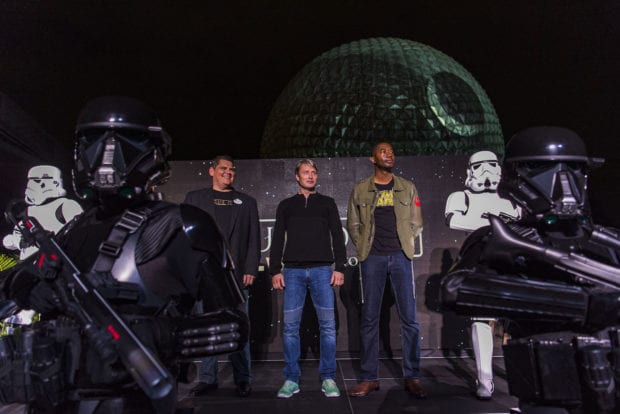 With “Rogue One: A Star Wars Story” opening in theaters on Dec. 16, a special event was held at Epcot to announce new and updated Star Wars experiences coming soon, as well as transform a Disney icon into the Death Star.

To celebrate the upcoming release of “Rogue One: A Star Wars Story,” the iconic Spaceship Earth at Walt Disney World transformed into the Death Star from Star Wars. Actor Mads Mikkelsen, who plays Galen Erso in “Rogue One,” also made a special appearance. 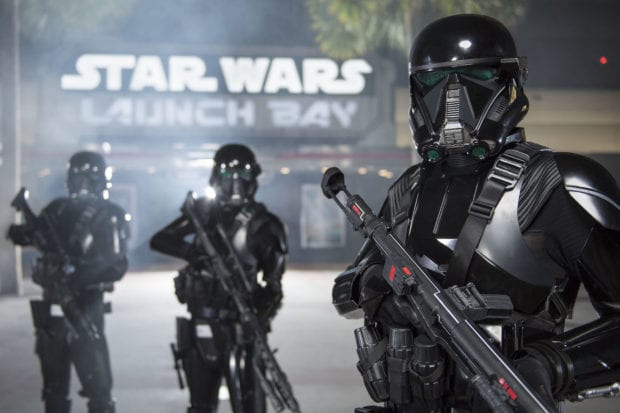 In the daytime stage show “Star Wars: A Galaxy Far, Far Away,” guests will get a first look at AWR Troopers from “Rogue One,” AKA Imperial Death Troopers. Outfitted in their specialized Stormtrooper armor with a dark, ominous gleam, these soldiers serve as bodyguards and enforcers for Director Krennic, a highly placed officer within the Advance Weapons Research (AWR) division of the Empire. A new Troopers sequence will join the show Dec. 16.

The nighttime show, “Star Wars: A Galactic Spectacular,” will return to Disney’s Hollywood Studios on Dec. 16 and will join “Jingle Bell, Jingle BAM!” as a second nightly fireworks spectacular at the park through Dec. 31. The show will continue to be presented in 2017.

Starting mid-December, randomized scenes will be returning to Star Tours: The Adventures Continue. Instead of each ride experience launching from the planet of Jakku, the attraction will be randomized to both start and end at different locations for every galactic journey. New scenes from “Star Wars: Episode VIII” will be added to Star Tours in the coming year.

For the ultimate fan comes the ultimate tour. An all-new Star Wars guided tour is a seven-hour immersion in all the park’s current Star Wars experiences. Here’s what it includes:

Younglings ages 4-12 on the guided tour package can also train in the way of The Force in Jedi Training: Trials of the Temple.

Priced at $129 per person, tours begin Jan. 2 and will be offered on Mondays and Saturdays throughout 2017. Reservations for January tours can be made soon.

These latest additions celebrating the Star Wars saga continue to elevate the Star Wars presence at Disney’s Hollywood Studios. Entire Star Wars-themed lands are now under construction at the theme park and at Disneyland in California.