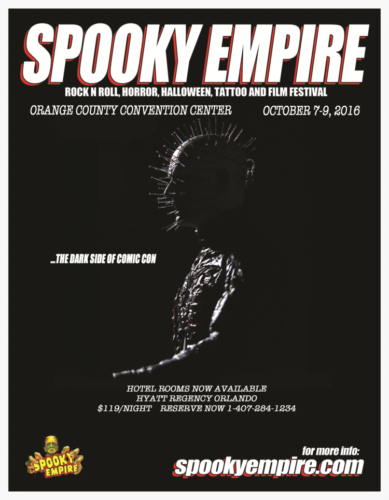 Spooky Empire 2016 moves to the Orange County Convention Center this fall with Pinhead and Freddy Krueger in tow.

Orlando’s longest running horror convention will be bigger, badder, and bloodier than ever this fall when Spooky Empire 2016 brings Pinhead and Freddy Krueger to the Orange County Convention Center on October 7-9.

All advance tickets, now on sale, are discounted. Prices increase after September 19th and at the door. In advance, three day passes are $60, one day passes on Friday and Sunday are $30, and one day passes on Saturday $35. VIP Packages are $199 and include early entry to all three days, raffles, T-shirts, autograph line fast-pass, exclusive VIP party access on Saturday night with guest celebrities in attendance and a special cake designed by Eric and Patty Woller, two-time champions of Food Network Cake Wars. Tickets for children under eleven years old are free.

Rooms are available at The Hyatt Regency for a discounted price of $119 per night. Rooms can be reserved online or by calling 1-407-284-1234. Mention ‘Spooky Empire’ for special rate.

For more information regarding the schedule and to purchase tickets, visit www.spookyempire.com. Stay tuned as more activities, special guests, celebrities and more will be announced in the coming months.

Get your blood pumping for Spooky Empire 2016, watch this 2015 episode of Attractions The Show, featuring footage of last fall’s event:

Ripley’s launches My Believe It Or Not Moment writing contest