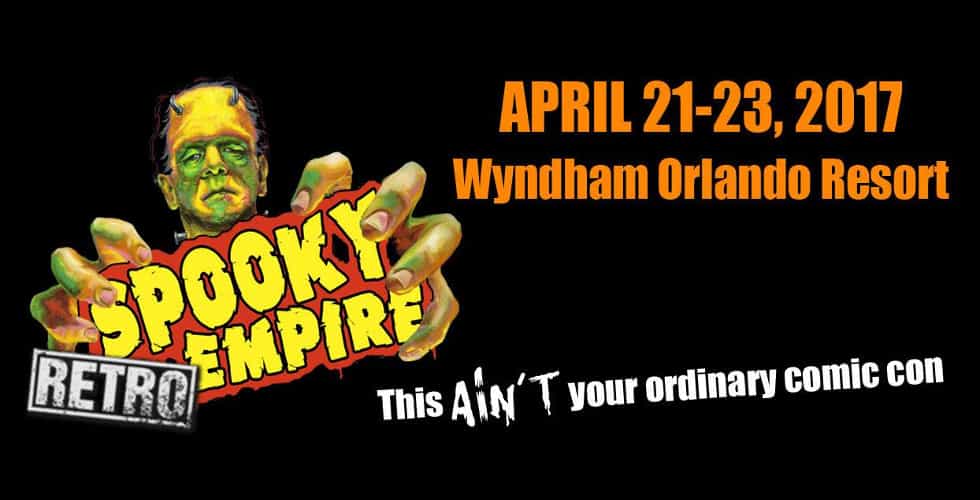 Go “retro” this April with Malcolm McDowell and Dee Snyder at the Spooky Empire Mid-Season Convention.

Halloween season is still half a year away, but you can stay scared during the spring at the Spooky Empire Mid-Season convention, which has announced a roster of “retro” guests including Malcolm McDowell and Dee Snyder.

Spooky Empire announced its return to The Wyndham Orlando Resort for their mid-season convention happening April 21 – 23, 2017. The 3-day annual weekend will feature an array of activities including celebrity autographs with meet & greets, Q&A’s led by special guests, and a tattoo festival with more than 25+ artists.

Celebrity guests and highlights include Malcolm McDowell from the classic cult movie A Clockwork Orange as well as Tank Girl and Star Trek: Generations. He will be joining the cast of Rob Zombie’s Halloween with Tyler Mane, Scout Compton and Kristina Klebe. Also in attendance is Dee Snider, rock icon and lead singer for Twisted Sister who will participate in a Q&A hosted by MTV’s Riki Rachtman.

Other expected guests include:
Joan Cusack from the Netflix series, A Series of Unfortunate Events, Shameless and the voice of Jessie from Disney’s Toy Story movies
Ernie Hudson of the original 1984 Ghostbusters
Shannon Purser from the hit Netflix series Stranger Things and the CW’s new series Riverdale
Ryan Lambert and Andre Gower from the classic movie Monster Squad
More guests are to be announced leading up to the convention.

The weekend will kick off Friday afternoon with a special Day of the Dead Processional starting at 12:00 p.m. at Uno Pizzeria & Grill on International Drive. Prior to the procession, walkers will have the opportunity to look like the iconic sugar skull painted on their faces by special effect make-up artists.

Throughout the spooky weekend guests will enjoy vendors and haunting exhibitors that will offer merchandise including art, movies, toys, props, action figures, comic books, special effects, clothing, and jewelry. The weekend will also include an array of after-hours events for paid attendees on Friday kicking off with a tribute to the late rockstar Prince, to commemorate the one year anniversary of his death and Saturday night guests will enjoy a “Rocktail” pool party.

All advance tickets, now on sale, are discounted. Prices increase at the door. In advance, three day passes are $60, one day passes on Friday and Sunday are $30, and one day passes on Saturday $35. VIP Packages are $199 and include early entry to all three days, raffles, T-shirts, autograph line fast-pass, exclusive VIP party access on Saturday night with guest celebrities in attendance. Tickets for children under eleven years old are free.

Rooms are available at The Wyndham Orlando Resort for a discounted price of $119 per night. Rooms can be reserved by calling 1-800-421-8001. Mention ‘Spooky Empire’ for special rate.

For more information regarding the schedule and to purchase tickets, visit spookyempire.com/purchase-tickets.

Who is Dee Snyder?

In the last paragraph, it is spelled correctly as Snider.

The cast of ‘Avengers: Endgame’ vote on...