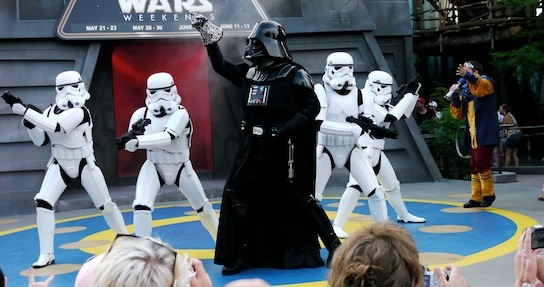 The Star Tours ride at Disney’s Hollywood Studios is making its last run on Sept. 8 to make way for its reimagining in 2011 – but fans have the opportunity to attend a special “decommissioning” party from 8 p.m. to 1 a.m. on Aug. 14. The Last Tour to Endor is a special ticketed event the Saturday night during Star Wars Celebration V – The official Lucasfilm fan convention.

We’ll previously told you about the Last Tour to Endor event, but the Disney Blog has just released more details on the events of the evening.

In addition to the previously announced Death Star Disco and Star Wars fireworks, there will be a special edition of Hyperspace Hoopla:

• Chewbacca, Han Solo and the Jawas will perform a tune from “Grease.” Look for Chewbacca’s fur made into a pompadour hairstyle just for the occasion.
• Luke Skywalker and Princess Leia will show off with a dance number from “Dirty Dancing.” (Wait, aren’t they brother and sister? eew.)
• The Star Wars ladies, including Queen Amidala, Ahsoka Tano, Zam Wessel and Aurra Sing will dance to a Madonna tune.
• Similar to the recent Star Wars Weekends Hyperspace Hoopla (video below), Darth Vader and his stormtroopers will dance to a medley of Michael Jackson songs.

A never-before-seen show, created just for “Last Tour to Endor”, will also be announced soon. Event-exclusive merchandise will also be for sale.

UPDATE: Disney will present a special show that brings together Star Wars and Indiana Jones at the Indiana Jones Epic Stunt Spectacular.

The $75 tickets are limited and include round-trip transportation from the Orange County Convention Center, where Celebration V is taking place. Those with tickets can enter the park starting at 4 p.m. Many other Hollywood Studios attractions will also be open during the party. To purchase tickets, visit starwarscelebration.com/Disney.

Here’s a look at this year’s Hyperspace Hoopla, including sequined glove Darth:

For an idea of how cool fireworks can be when set off to Star Wars music, here’s a video from last year’s movie themed Fourth of July fireworks in Celebration, Fla.:

Thanks for the advice. Will put it to work. Tom

Beer is back at Busch Gardens Tampa...