We’ve all heard the talk about the biggest expansion in Disney Parks history, Star Wars: Galaxy’s Edge. You might have also heard fans already worrying about the massive crowds expected to travel to the new lands. But – we’re here to tell you it won’t be as bad as you think. 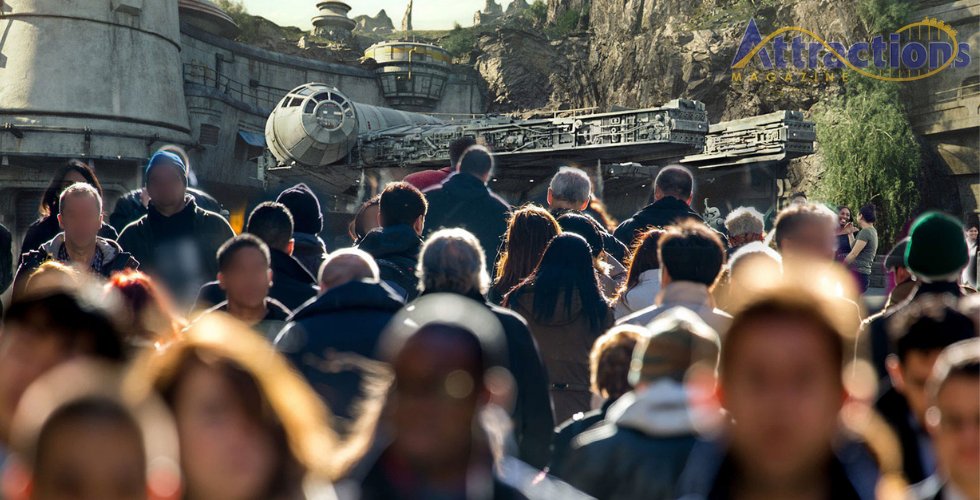 Now, to be clear, this article is focusing on the weeks and months after the official grand opening of the lands. Disneyland park and Disney’s Hollywood Studios will certainly reach max capacity on the first few days and weeks after the Galaxy’s Edge opening.

This article is for the more passive fans that want to experience the land, but aren’t going to visit the very first day. We’ve seen many guests say they will stay away for years because of the crowds, but that really shouldn’t be necessary. 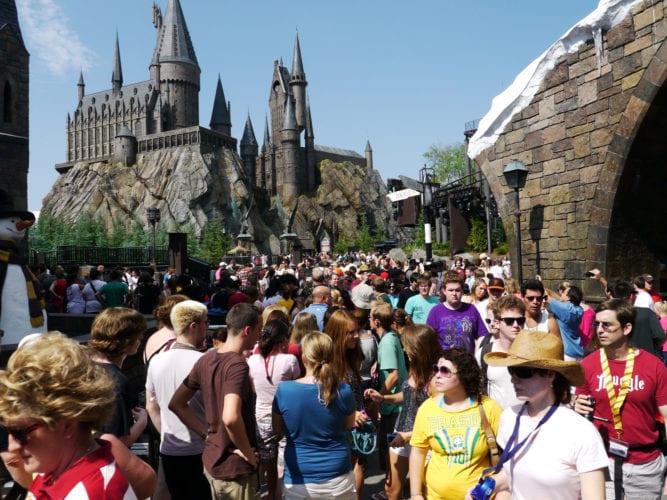 An easy comparison for crowd expectation is Hogsmeade, the Wizarding World of Harry Potter’s first land at Universal Orlando Resort. Opening day brought record-breaking lines and immense crowds to Universal’s Islands of Adventure. The land was, and still is, a massive success. But it’s important to realize that these shoulder-to-shoulder crowds didn’t last forever. 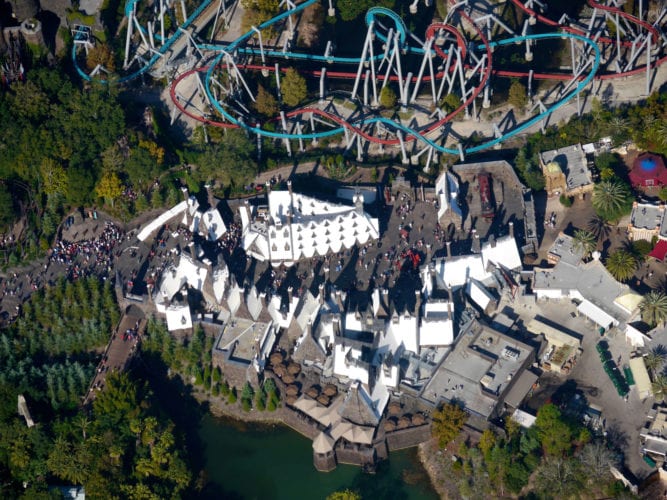 This aerial shot was taken just five months after the opening of Hogsmeade. The difference in the crowd levels is astronomical, and much easier to navigate. It didn’t take Universal Orlando long to understand the crowds, the flow of foot traffic and how best to control the high level of fandom. 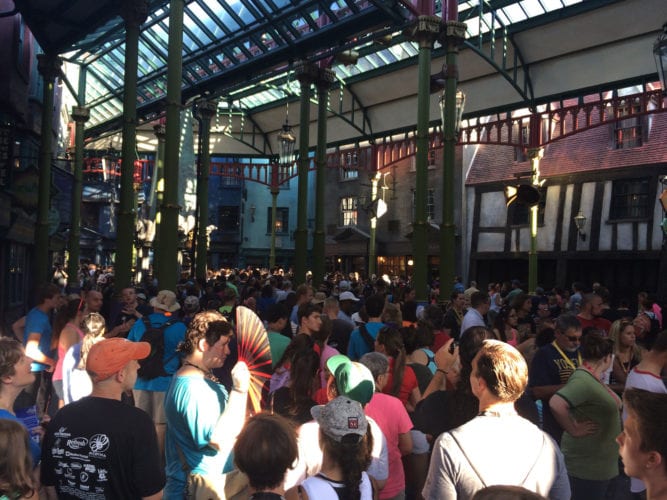 We can also look at the crowds during the opening day of Diagon Alley, the major Wizarding World of Harry Potter expansion at Universal Studios Florida next door. Again, opening day brought out shoulder-to-shoulder crowds. 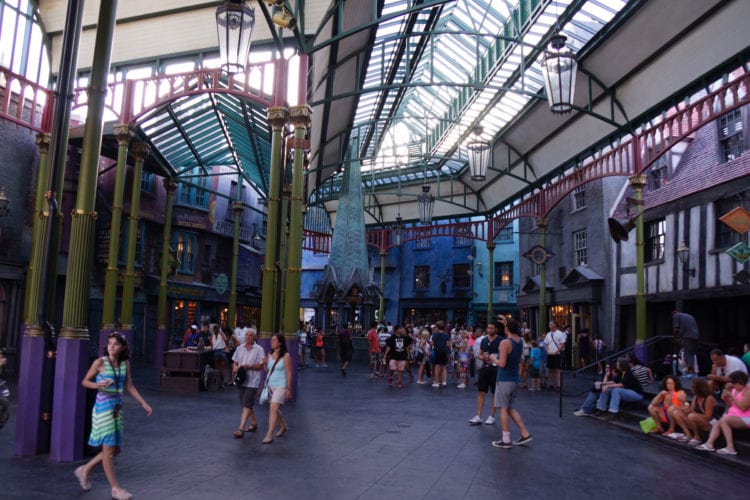 But four months later, the same area was much calmer and easier to enjoy. Yes, some of the ride wait times were still two to three hours, but the land and shops were very reasonable crowd-wise for a land based on such a popular intellectual property.

It’s also important to note that not every day looked like this in Diagon Alley, despite time passing since its opening. The land is still very crowded during popular travel times like Christmas week and spring break.

Pandora – The World of Avatar has become famous for its floating mountains, its two high-tech rides and the extended wait to enter those attractions.

Even with the power of the world’s most successful film, the high visit rate of Walt Disney World and the continued success of the land, Pandora – The World of Avatar is not a madhouse overflowing with crowds every single day.

Yes, the wait times continue to average around two to three and a half hours for the Avatar Flight of Passage attraction. But, as seen here, less than one year after opening, the land isn’t overflowing with guests.

We don’t make these comparisons to say The Wizarding World of Harry Potter or Pandora – The World of Avatar are unsuccessful after their first few weeks. In fact, they are still some of the biggest draws in the theme park world.

We say this to let you know the theme parks know how to level out crowds and control the chaos. Although there seems to be less and less of them, there are still slow days and weeks at every theme park.

The opening crowds each day for Avatar Flight of Passage are taken care of like clockwork. Cast members are set up to guide guests through a series of paths to keep the line moving through the park. They take a crowd of thousands of guests and turn it into a clean line with crosswalks, clearly defined areas, and still keep a majority of the non-ride walkways clear. 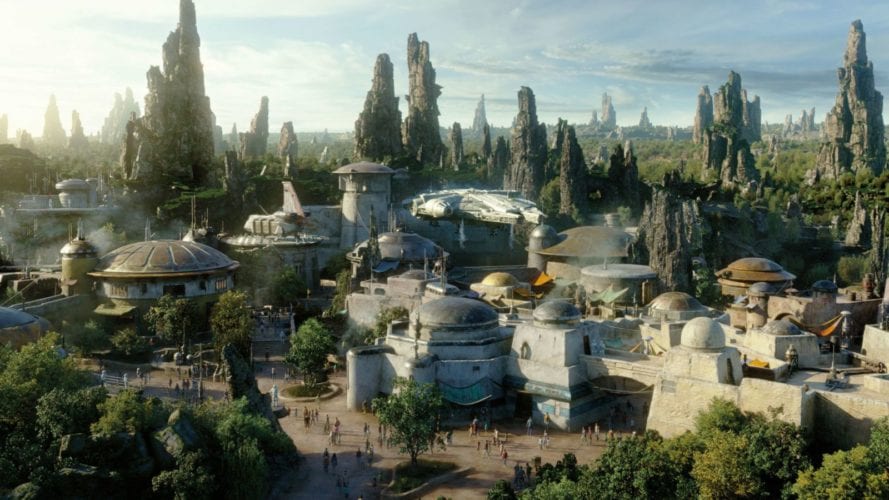 Star Wars: Galaxy’s Edge will be operated the same way. The first few weeks will certainly be filled with guests, but as the weeks and months go on, expect the land to become much easier to enter and enjoy.

In fact, Disneyland is regulating the amount of guests that will enter Star Wars: Galaxy’s Edge on the first few opening weeks. From May 31 – June 23, only guests with valid park admission and a no-cost reservation will be able to access Disneyland’s version of Galaxy’s Edge. There will be no standby line to enter the land during this time. Starting June 24, however, guests will no longer be required to have a reservation to enter. Walt Disney World will not require reservations at all.

This free reservation will help regulate the amount of guests in the land during the first few weeks, but the rest of Disneyland will likely be very crowded. Guests staying at Disneyland Resort hotels will be guaranteed entry, and other ticket holders staying off-property will be given a separate chance to sign up for a reservation. You can learn more about that process here.

Take a look at these walkways through the land. They are scattered and wide; there isn’t one singular way to go somewhere, and there isn’t a specific need-to-be area.

Once both attractions open in the land’s Phase 2, Galaxy’s Edge will be cut in half – with some of the crowds heading to Star Wars: Rise of the Resistance, and the other half heading to Millennium Falcon: Smuggler’s Run. And, that’s even considering that all guests would even head to those attractions. There will be way more to do than the two rides in this land. 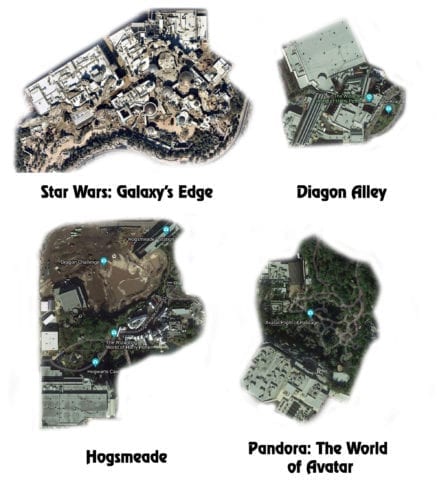 Here is a rough estimate of the total land size of the four mentioned theme park lands.

The Star Wars: Galaxy’s Edge photo is from Nearmap, with the other three from Earth Explorer. We’ll use these to get a rough idea of the total size of these lands. All four shots are from the same distance in the sky and include their respective attractions’ show buildings. This comparison gives a great idea of how large the upcoming Universal Orlando coaster, Hagrid’s Magical Creatures Motorbike Adventure, will be.

Looking at these satellite-based images, we can see that while Galaxy’s Edge certainly is the biggest, it’s only slightly larger when you’re comparing the land size of Hogsmeade. The attractions’ show buildings make up a massive part of the lands, each with their own intricate queues, like the Gringotts Bank in Diagon Alley.

Since the crowds will not be taking up much of the show building space, nor the backstage areas, we also made a comparison of the walkways, shops and other general onstage areas that guests can enjoy without going on a ride. 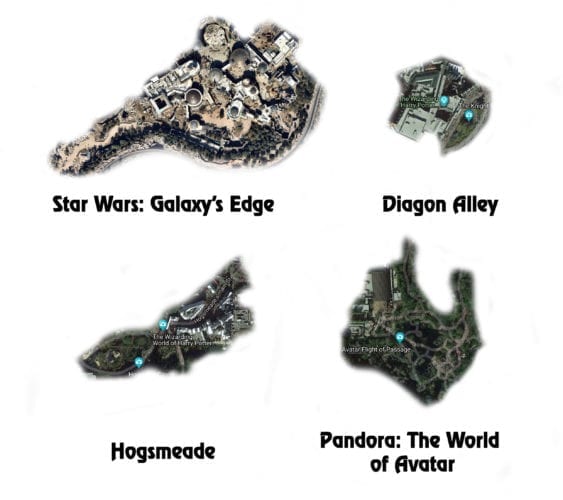 When we look at just the walkable area for guests (areas that are not backstage nor a queue for an attraction), we get a much better idea of scale. Galaxy’s Edge dwarfs both Wizarding World locations, and if it wasn’t for the extended nature walkways in Pandora, it would do the same to that land. Galaxy’s Edge contains a full-fledged city within its borders, the Black Spire Outpost.

Looking at those comparisons, we come to this: A new Star Wars-themed land that is nearly as large as Hogsmeade, Diagon Alley and Pandora – The World of Avatar put together!

This massive scale alone should help put some skeptics to rest that the land will always be impossibly crowded. There’s simply so much room that it’s obvious Disney put a lot of thought into the crowds and the need for space. Even if you make the argument that Star Wars is more popular than Avatar or Harry Potter, that doesn’t dispute the huge size of the land. You also need to take in account that the queues for the rides will eat up a massive amount of people.

Yes, the land will be busy. Yes, the first few weeks will have tens of thousands of superfans visiting. Yes, the waits will probably be four or more hours a day for the rides for a long time.

But no, you don’t need to wait years to come enjoy this new land. No, the crowds will not be impossible. And no, you do not and should not skip this area on your next Walt Disney World or Disneyland trip. This is the future of theme parks, and you should experience it as soon as you can.

For the lowest crowd levels, research slower times of the year for each resort, such as after summer break. If you can, avoid holiday weeks, weekends and any time kids are usually out of school. If you can’t avoid those dates, get to the park an hour or more before opening or wait and visit in the evenings.

Want to learn even more about Star Wars: Galaxy’s Edge? Check out our Frequently Asked Questions article on what to expect with the new land, and our interview with reporter Gabrielle Russon from the “Orlando Sentinel,” who experienced a hardhat construction tour of Galaxy’s Edge in Disneyland.