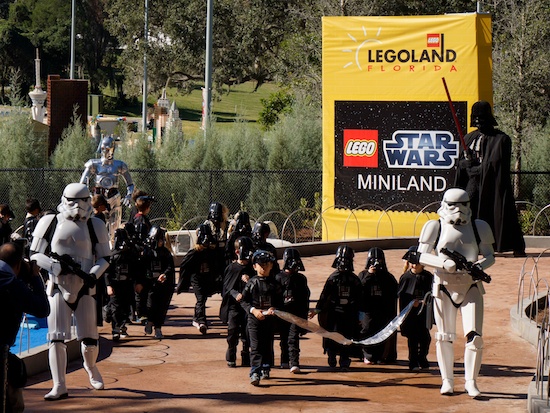 The Force has arrived at Legoland Florida. Some very cute mini Darth Vaders helped open the newest area of of the park – Star Wars Miniland.

“We are celebrating much more than the opening of a new model display,” said Legoland Florida General Manager Adrian Jones. “We are witnessing the collaboration of two unequaled brands. Lego is one of the most powerful toy brands in the world, and Star Wars is arguably the best-known and loved franchise in the history of film, television, literature and gaming.”

Costumed 4 and 5-year-olds joined grown-up Star Wars fans from the 501st and Rebel Legions to mark the opening and help unveil scenes from each of the six movies, and a seventh from the animated series Star Wars: The Clone Wars. Design, construction and installation took more than 12 months and a total of 1.5 million Lego bricks built in 1:20 scale. The models include sound effects, lighting and animation that bring them to life.

Here’s a look at the young sith lords marching through Star Wars Miniland:

Here’s the full opening ceremony and a look at all seven themed areas:

The featured cinematic scenes are:

• Episode I: Naboo: Naboo is one of the most geographically varied planets in the Star Wars movies. This scene depicts the Battle of Naboo and the capital Theed – both the Royal Palace and the hangar can be seen. In this battle scene, Obi-Wan Kenobi and Qui-Gon Jinn encounter and fight the Sith apprentice, Darth Maul.

• Episode III: Kashyyyk and Mustafar: On one side, you’ll be placed right into the Battle of Kashyyyk – the home of Chewbacca and the Wookiees. Here you’ll discover vehicles modeled from Lego bricks, such as the massive Clone Turbo Tank. On the other side, catch a glimpse of the fateful duel on Mustafar between Obi-Wan Kenobi and Anakin Skywalker.

• Episode IV: Tatooine: Luke Skywalker, Obi-Wan Kenobi, C-3PO and R2-D2 can be spotted in this desert planet, Tatooine. Here you’ll discover Uncle Owen’s moisture farm, where Luke Skywalker lived as a child; peek inside the Cantina where the animated Cantina Band plays and stand above the spaceport where the largest Lego model of Han Solo’s famous starship, the Millennium Falcon, blasts off.

• Episode V: Hoth: The Rebels take refuge on this icy planet, Hoth, but the Empire tracks them down and the Rebels are forced to flee. This scene features Lego models of the Imperial AT-ATs, Rebel snowspeeders and Luke Skywalker’s X-wing starfighter. Look closely and you’ll see Luke Skywalker, Han Solo and Princess Leia.

• Episode VI: Endor – Next we travel to a forest moon and home of the Ewoks, who fight against the Imperial Forces alongside the Rebels. The Endor system plays a key role in Return of the Jedi as the site of the Battle of Endor, fought to prevent construction of the second Death Star. This scene presents the final victory of the Rebel Alliance over the Empire. Here you can view a large-scale model of an Imperial shuttle on its landing platform, delivering a fearsome passenger – the Dark Lord of the Sith himself, Darth Vader.

• The Clone Wars: Christophsis – The seventh area brings us to a scene from the animated series The Clone Wars on the planet Christophsis. Chronologically, the series takes place between Episode II and Episode III and focuses on the adventures of Jedi Knights Anakin Skywalker and Obi-Wan Kenobi. The Lego scene depicts part of the planet’s surface, with the largest of all Lego Star Wars models: an approximately eight-foot tall building from the Crystal City. You will also see a scene showing a battle between Separatist battle droids and Republic clone troopers.

The new Lego Star Wars Miniland will be included with park admission.

Attractions – The Show – Nov. 8, 2012 – Transformers are coming, Space Shuttle retires and much more