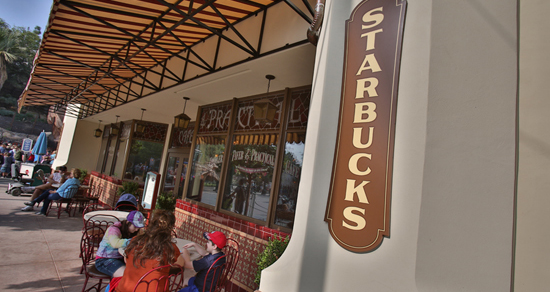 The first two Starbucks locations in Walt Disney World’s theme parks will open next summer, one at Magic Kingdom and one at Epcot. These two locations will be the first at Disney World parks following the one at Disney California Adventure, which opened this summer.

Both locations will fit the theme of their surrounding areas. At the Magic Kingdom Park, cast members will wear a outfit consistent with the early 20th century look and feel of Main Street, U.S.A. At Future World in Epcot, the new Starbucks location and cast member costumes will be designed to match the park’s futuristic theme. Each Starbucks location will be fully functional, including all the signature beverages, a variety of baked goods, and sandwiches, and they’ll accept Starbucks gift cards.

Here’s some additional information about our Walt Disney World Resort Starbucks locations. The Main Street Bakery will keep its name and theming when it reopens in early summer. It’ll also continue to serve Disney favorites like cookies, brownies and seasonal cupcakes, in addition to Starbucks signature beverages and other items. And for those of you who asked in comments, the cinnamon rolls are available at Gaston’s Tavern in New Fantasyland, and the ice cream sandwiches are available at Plaza Ice Cream Parlor on Main Street, U.S.A.

this sucks! I love Starbucks but Main Street Bakery is a Magic Kingdom tradition, this won’t be the same 🙁

The fanboys are obviously upset (reference above), but I’m sure the general public will appreciate this. Sure, they’re on vacation, but some familiarity – especially the good kind like Starbucks – is always appreciated.

Waiting for the opening of Starbucks locations in 2013 on the Main Street USA.

I love Starbucks, but hate this idea.

I love Starbucks but not in Disney which is unique and should stay that way. There’s a Starbucks in every town around the world anyway.

Great news! The coffee served at WDW is sub-par, adding the Starbucks product on property is a definite pick me up. The Starbucks in the California Adventure park blends seamlessly in with its surroundings and you wouldn’t even know it was there unless you were looking for it. I assume the same will be true for the 2 new locations in Florida.

like others, i love starbucks, but am dissappointed that such a long standing favourite is going. hopefully, the change is for the better, and im glad to see that they will be taking gift cards !

I love my Starbucks BUT Disney was always unique and removed from the “real” world — I HATE this idea, just like I have hated the homogenization of merchandise from park to park, the elimination of the free photo and souvenir button from MVMCP, the elimination of the lanyard, pin and shopping discount from the Candlelight Processional “package” — the elimination of the gratuity and appetizer from the dining package etc etc etc — I am sure Starbucks will be paying Disney a pretty penny to have these locations — oh well, I have to remember the corporate mentality that has continued to become ever present once Walt himself was gone.

I don’t know why people are upset. Nobody complains about the giant “Seimens” on Spaceship Earth after Illuminations. Disney has used sponsors and 3rd party vendors since day 1. This is nothing new. Nobody complains about the Dole Whip and it has the name of the sponsor right in the name of the product! Relax people. Maybe you could bring your own coffee into the parks in your giant Hiking backpack that people seem to need to go to a theme park.

You make a very good point Ron — btw, I try to carry media etc in pockets so I need no bag in the parks, and I really do not want to spend my vacation baking snickerdoodles and chocolate chip cookies which is what we will miss most — !

Guests, and cast members alike, have been requesting this product for a long time. The coffee served on property wasn’t really that great. Disney strives to provide the best guest experience possible. Hence, the incorporation of Starbucks to the theme parks. I don’t visit Walt Disney World once a year, I basically live there. The parks are huge and guests spent a lot of time and energy while visiting. Some days Magic Kingdom will open at 8 AM and close at 2 AM, those who stay that long would like to have a variety of good quality tasty caffeinated drinks around. Most people wouldn’t believe how many guests ask for Starbucks while on vacation. True story!

So now instead of getting all our favorites in one location, we will soon have to go all over the park to get what we want. More walking & even more lines. Geeeesh.

This is a disgrace! Walt Disney’s vision for the theme parks was that they would be an escape from everyday life. To allow any commercial chain to be in Disney world is a shame and goes against Walt’s vision for the parks.

Coffee sucks, Starsucks sucks and this decision sucks! They serve a crappy, stinky product that is disgusting. I hope CMs will not allow it in any buildings or lines, where its foul stench will cause vomiting and ruin people’s vacation experiences. A Guinness brewery would be much better. Something good for you, with a heavy dose of natural antioxidants.