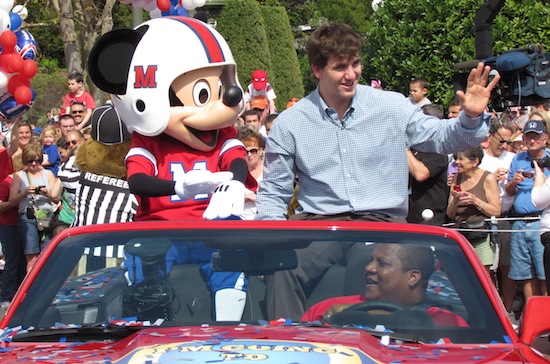 After leading his team to a come-from-behind 21-17 victory over the New England Patriots at Super Bowl XLVI, what did New York Giants quarterback Eli Manning do next? He went to Disney World of course. 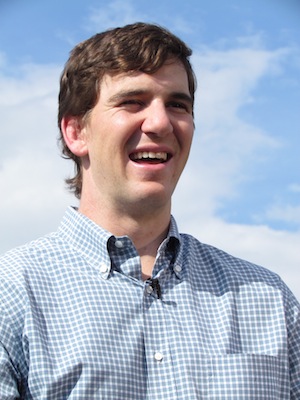 Manning was joined in the Magic Kingdom by NFL Youth football players, and of course, Mickey Mouse and Minnie Mouse. New York Giants balloons mixed in with red, white and blue balloons along the parade route as other Disney characters and confetti in the shape of the Lombardi Trophy (awarded to the NFL champion) rained down on the happy scene.

Manning’s pronouncement, part of the production for one of TV’s most enduring and iconic Super Bowl commercials, was captured seconds after the final whistle. Manning completed 30 of 40 passes and amassed 296 yards, including his trademark fourth-quarter heroics, leading the Giants to the winning score.

In 2008, Manning was treated to a hero’s welcome at Disney after leading the Giants to an upset win over the Patriots, 17-14, in Super Bowl XLII. He becomes the first Giants quarterback to win two Super Bowls.

This latest commercial is the 45th in a series that began in 1987 following Super Bowl XXI. The first “I’m going to Disney World” commercial, featuring Giants quarterback Phil Simms, was regarded as a groundbreaking concept – a produced national commercial involving a current event, airing on major networks within hours of its conclusion. Manning again joins a lineup of people from sports and beyond who have celebrated milestone accomplishments in “I’m Going to Disney World” commercials.

Here’s a look at Eli riding down Main Street with Mickey and answering questions. 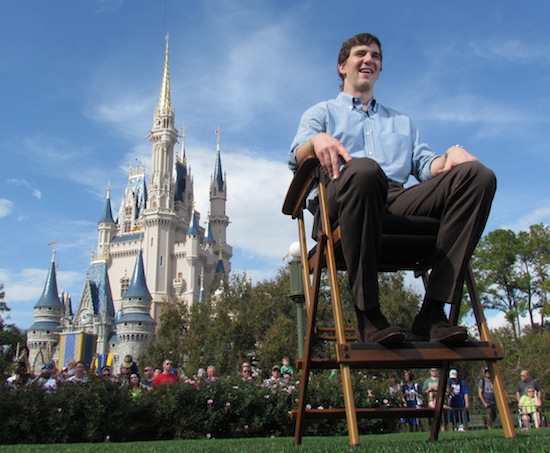 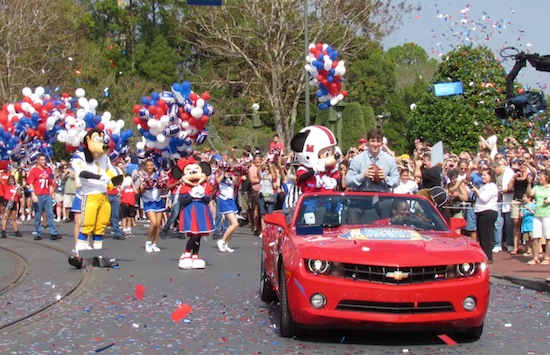