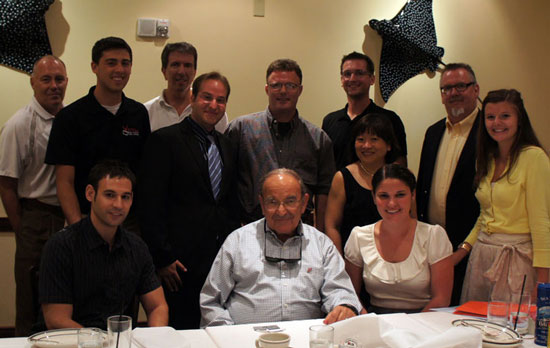 Way back in May 2011, during D23’s Destination D event, Disney Legend Marty Sklar visited the UCF Rosen College of Hospitality Management to speak with the students. Marty was then the featured guest of a fundraising dinner.

This story has not yet been told and this is a good little report to share.

The presentation and dinner were organized by a University of Central Florida student group, The Future Theme Park Leaders Association (FTPLA).

Marty Sklar is also a former head of Walt Disney Imagineering. One of the biggest projects he lead was the building of Epcot from 1974 to 1982. Marty is also the only person to have been at the opening of all 11 of the Disney theme parks worldwide.

The FTPLA students had met Marty during the annual trip that 12 students take to visit all of the Southern California parks. In 2010 the group toured the Imagineering headquarters in Glendale. They asked if Marty would speak as a fundraiser, he accepted. Marty regularly speaks at his Alma Mater, UCLA, too.

This was my first encounter with the FTPLA, and I was very impressed. The students are already employed in the area and regional attractions, in all kinds of roles, and have great respect and admiration for each other. The group was formed in 2004. Through graduations and subsequent career paths, the group is now well-connected with all the major attraction operators in the U.S.

I found it very refreshing to watch young people, more than half my age, working together with eagerness and confidence. The attractions are going to do well with these new leaders.

The first fundraising event of the night was at the Rosen College of Hospitality Management, a UCF campus located on donated land next to one of the Orange County Convention Center area hotels.

Marty’s presentation was very good. He told stories of people he worked with and the attractions that were built in the course of his 54-year career at Disney. He spoke for almost two hours, and showed several rarely seen videos.

One video was made for the opening of Hong Kong Disneyland, an introduction to Imagineering. It had several clips I had not seen before. 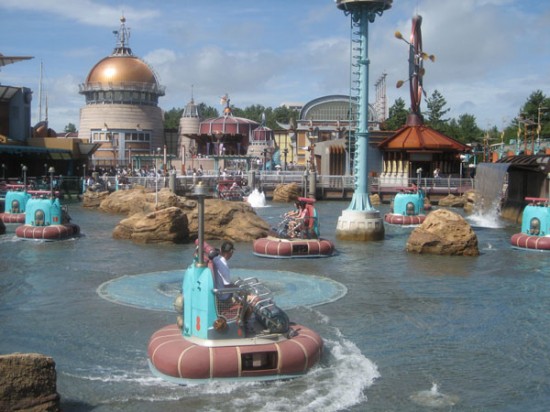 One of the clips showed a test vehicle zipping through water in one of the Imagineering warehouses. This test resulted in the making of a Tokyo DisneySea attraction, seen in this photo taken in 2007. (One of many Tokyo park attractions we Disney fans wish was also here in the U.S.!)

One thing I did not know is that Walt’s last film, about the Florida project that became Walt Disney World, has two endings. One for the Florida legislature, in the pitch to create the Reedy Creek Improvement District that governs Walt Disney World. The other ending was for pitching to companies, to help build Epcot.

Epcot was originally envisioned as a city of tomorrow. Marty said that of all the companies that saw the film in the 1960s, only General Electric was interested in participating in building the city.

One of the threads in Marty’s presentation was about music in the theme parks. Until Epcot, there were only five songs written for the Disney parks.

Marty talked about the Tokyo parks. They are currently operating with 25 percent less energy than before, due to the post-earthquake power situation. They way they are doing this is by closing earlier, limiting the amount of night illumination needed. But most of the power cutbacks are backstage, so that the show is not diminished.

One of the students asked about the origin of switchback queues. You know, the back and forth line systems at the parks. I didn’t know these didn’t really exist until the Disney parks. They are based on something seen at the time in Europe, but not quite how switchbacks queues are today. Think of how common switchback queues are now – even fast food restaurants have them.

One of the students asked if Marty could talk about the commandments or keys to making good attractions. There are about 40 of these rules or guidelines to success. Among them:

Know your audience for your story.

One story at a time. That is, keep the story simple. Don’t try to explain too many things at once. Telling one story at a time was a challenge in making Epcot. The original sponsor of the original Energy pavilion, for example, rejected 39 scripts for the show because it wanted to showcase everything it did, all at once.

Avoid contradictions, maintain identity. This is, for example, seen in the Main Street USA sections, where all the buildings talk to each other, they are all in the same family. Buildings in real streets generally conflict with each other.

One thing Marty emphasized to the students is to learn all you can about as much as you can. You never know when what you know can be handy. He pointed to an Imagineer (John Hench, who helped make Dumbo the movie, and later designed Space Mountain, Spaceship Earth, etc … ). John was an Imagineer who was an expert on practically every subject and approved the designs for not only attractions but costumes worn by the cast members. Marty asked for a list of all of the magazines that John read. He gave him 34 magazines, in all sorts of topics.

Something Marty thinks back to every now and then was when Walt Disney World was in the planning stages in 1966. They were on a large X on the ground, on 100 cleared acres in the middle of raw forest. This X is where Cinderella Castle was built, and everything else has followed. Not only at Walt Disney World, but in the surrounding area. The Orlando airport, for example, had only seven flights a day. Now, 33 million people fly there a year. 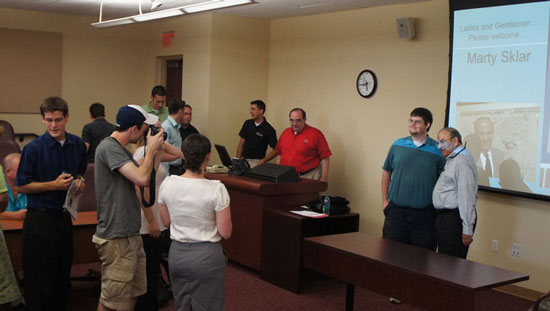 The presentation concluded, and many cameras and cell phones popped out for photos …

The second event of the night was a fundraising dinner where seats were auctioned on eBay. Dinner was a short drive away from the campus, at the Oceanaire restaurant at Pointe Orlando. It’s a high-end chain restaurant that is part of the Landry’s family (that includes Rainforest Cafe, T-Rex and also some small attractions).

Only a few at the dinner had also gone to the UCF presentation. Others were there just for the dinner, or did the dinner after slipping away from D23 events. About half of us were locals. Some work at area attractions or were graphic designers who do work for the attractions.

One of the things I enjoyed was seeing the FTPLA students in action. There was a contract for the dinner, with a fixed menu. The waiter presented the regular daily menu, an ala carte menu. This probably would be more expensive than the fixed menu agreed to earlier with the restaurant for the dinner, and would cut into the fundraising. The leaders quickly pulled out their contract and settled the dispute with the manager with grace, poise, and smiles.

It was impressive to watch this new generation of theme park leaders in action. One of the UCF curriculum paths is event management, and the leaders who arranged this dinner knew exactly what to do. I’ve been to far too many events or workplace situations where the unexpected inevitably happens, and people panic or get flustered. The students were confident and positive, quickly got the event back to plan. The students here were exactly the leaders and co-workers you’d want in your own organization.

One of the things on the menu was something called Wild California Hamachi. No one at the table had heard of it. The menu changes daily at the Oceanaire, and although the menu was fixed, the exact selection of fish was not part of the contract.

Hamachi is a fish you could order cooked to your liking. Something like a steak. The chef and the waiter recommended nothing more that medium rare. I ordered mine to chef’s recommendation, what ever the chef thought was best. I’m glad I tried it, it was interesting and different.

Conversation with Marty covered all kinds of topics.

Something Marty revealed is that he would be walking through Epcot the following morning, and telling stories of what was involved in building the attractions. The conversations were being video recorded. It’s unclear where this footage ended up, but it sounds like something to seek out!

Marty was also interested in learning about us, and it was fascinating to learn about each other.

One of the diners is a school teacher in real life, and has dreamed about working during the summer at one of the parks. The FTPLA students had great advice for him to pursue his dream.

When dinner ended it was time for autographs and photos. It was a great night!

If you’d like to read one of the experiences Marty shared with the students — of the creation of Space Mountain and securing sponsorship — see this link to the October 2011 IAAPA online magazine. This article also has some other interesting stories, particularly about how sponsors are presented at Disney attractions. 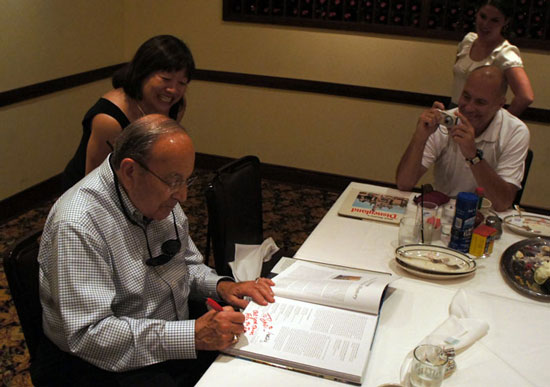 Great report! What an event! If the vids you mention ever become public, I hope you will announce them here.

Wow! What a blast. I was reading this blog and there I was! (I am the handsome guy on the right.) It was a great night! I am also the teacher who wants to work at an amusement park this summer (Currently applying at Knoebels…fingers crossed).

D23 to celebrate their third anniversary with...