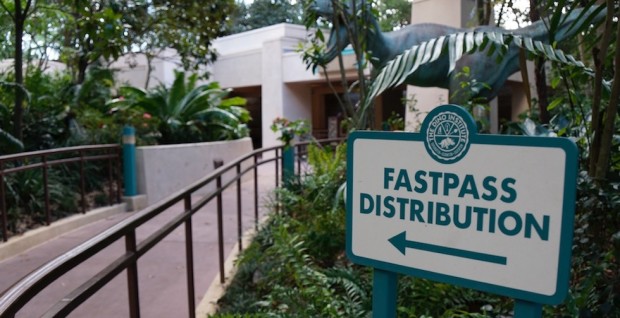 Disney has stopped offering paper FastPasses at Animal Kingdom, forcing all guests to book FastPass+ if they want to skip the lines, and now they’re set to expand the “test” to the most visited theme park in the world, Magic Kingdom. 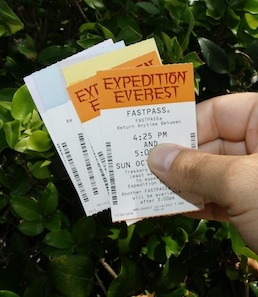 Signing up to use FastPass+ works differently depending if you have an active MagicBand or not. Currently all guests staying at a Walt Disney World resort are receiving a MagicBand. (Disney is getting rid of the Key to the World cards resort by resort over the next few weeks.) Park guests not staying at a Disney resort currently have no way to get a MagicBand, but supposedly will be able to purchase one in the future. But they can still use FastPass+ at Animal Kingdom, and soon at all Disney World parks.

Here’s how it works for guests without MagicBands:
If you’re an annual pass holder or day guest without a MagicBand, you can still use FastPass+ during these tests, but you can’t do it through the app or website. Once you’re in the park, you’ll need to visit one of the MyMagic+ kiosks in the park to scan your plastic ticket and make your FastPass+ selections. You’ll then scan your card at the FastPass+ entrance at your time to ride. If you’d like to change any of your selections, you’ll need to visit one of the kiosks in the park. Disney cast members are also handing out slips of paper so you can look over your FastPass+ selections and make your decisions before you get up to the kiosk.

No matter if you are booking FastPass+ with a MagicBand or not, or in person or through the app or website, you may only chose FastPasses for one park per day, and you’re only allowed three FastPasses per day.

So if you’ll be at Magic Kingdom over the next few days, or Epcot or Disney’s Hollywood Studios in the next few weeks, you may want to get some FastPass tickets to keep as souvenirs, as it appears the FastPass machines will be going away for good.

UPDATE (1/18/14): Disney has revealed that paper FastPasses will be ending at Disney’s Hollywood Studios on Jan. 21 and Epcot on Jan. 23, expanding FastPass+ to all four Walt Disney World parks. It is not expected for any of the four parks to return to paper FastPasses in the future.

We were at animal Kingdom yesterday at the fastpass kiosks were not obvious to most. And when I did see one they either had no one around or the queue for them were longer than the queue for the near by ride with the cast members doing transactions with tablets.

Why would anyone boy a park hopper option if you cant use park hopper in the second park . dumbest idea disney ever came up with. they must be secretly working for universal!!!!

We were there last week – what a mess – MDE didnt work, an email was sent to us for our FP+ times, only 3 of our parties 9 FP+’s showed up – we missed almost all of them because it was raining and there was no-one to be found w/a tablet so we could take a picture – which didnt work so well anyway- to much glare on the screens – waste of money – after 3 days we went to universal – Had a great time –

Run through Disney at home with RunTheImpossible’s...