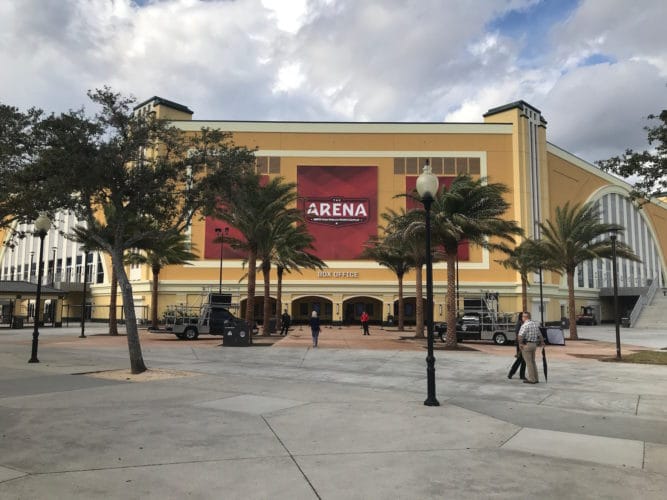 As part of the 20th anniversary celebration of its ESPN Wide World of Sports Complex, Walt Disney World has officially opened a new multi-purpose sports and entertainment arena.

ESPN Wide World of Sports executives, along with AAU and Varsity executives, marked the grand opening with a ribbon-cutting ceremony that featured streamers as cheerleaders performed a high-energy routine involving Minnie Mouse, who sported her new cheerleading outfit.

Starting this weekend, The Arena at ESPN Wide World of Sports Complex will host its inaugural event — the UCA and UDA College Cheerleading and Dance Team National Championship — which runs through Sunday.

The 8,000-seat arena will host a variety of major indoor sporting events from basketball to volleyball to gymnastics to wrestling. The venue also will host runDisney Health & Fitness Expos during runDisney race weekends, beginning with the Disney Princess Half Marathon Weekend presented by Children’s Miracle Network Hospitals in February.

The new arena is the third indoor competition venue at ESPN Wide World of Sports Complex and is one of the largest in the country designed specifically with cheer and dance events in mind. Its launch marks another milestone for the Disney sports facility, which opened in 1997 and pioneered a new type of sports vacation experience where athletes at all levels and ages can pursue their sports dreams.

“We have created one of the most unique sports arenas in the country,” said Faron Kelley, Vice President of Disney Sports. “We sat down and really listened to what our partners told us they needed the space to look like and what we ended up with is a fantastic new arena. We look forward to hosting many events in our new building for years to come.”

One of the unique features of the arena is its flexibility. It can be converted to host more than six regulation-sized basketball and volleyball courts and can be further expanded to host open-floor exhibitions and other major events, such as the College Cheerleading and Dance Team Championship, which will feature more than 4,700 athletes.

Other features of the new arena include two versatile auxiliary venue spaces, an attached box office, plus built-in loges and judges’ boxes with seating for approximately 70 people. There are also seven concession stands and 35 concession points of sale, which will include specialty items such as hazelnut churros, chocolate banana empanadas, donut chicken, Greek Dogs, and an Adobo Chicken Rice Bowl.

“We spent countless hours doing research to make sure we designed a building that caters to the needs of existing partners and potential future partners, including developing sports such as e-sports and futsal,” Kelley said. “The word we kept coming back to was flexibility and our new arena has something special and unique for all of our partners.”

Future plans for the sports complex include expanding the portfolio of outdoor sports, continuing to host high-profile events such as the 2018 NFL Pro Bowl Week and further supporting the 100-plus existing events that take place at the sports complex year around.

Mickey and Minnie to meet guests in...

Magic Kingdom to serve alcohol for the...