Theater Review: ‘Waitress’ is a comedic musical affair; not for the whole family 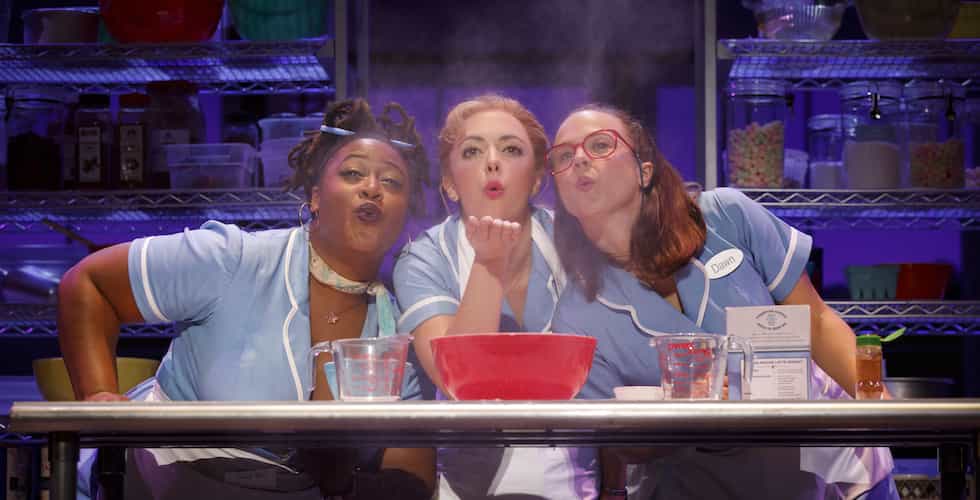 “Waitress – The Musical” is comedic and fun, though maybe not for the whole family.

“Waitress” is a musical not to be seen with kids or anyone you’re uncomfortable experiencing adult themes with. It’s based on the 2007 film of the same name, (which I’ve never seen) and is centered around pregnancies, unhappy marriages and affairs.

Jenna (Desi Oakley) is a waitress at a typical American diner, and a pie baking prodigy. She and her coworkers Dawn (Lenne Klingaman) and Becky (Charity Angél Dawson) navigate their usual days until Jenna finds out she’s pregnant. She fears what this will mean for her future and her unhappy marriage to her abusive husband Earl (Nick Bailey). She starts secretly saving up money to enter a pie contest, hoping to be able use the prize money to leave her husband. She’s also falling for her new obstetrician, Dr. Pomatter (Bryan Fenkart), who helps Dawn find her own happy ending. There are other side plots with her friend and the diner’s owner, Joe (Larry Marshall).

I first saw “Waitress” in New York about a year ago with my grandmother, which made me a bit uncomfortable. Sara Bareilles starred as Jenna when I saw it on Broadway, and while she was fantastic, I had no idea what I was getting into when I went to see it and was disappointed. Just the name “Waitress” and the pie aesthetic of the show led me to believe it would be a regular rom-com, but it ended up being more about affairs and less puns about working in food service than you’d think.

After seeing “Waitress“ at Dr. Phillips Center in Orlando with a friend, and knowing what to expect, I enjoyed it much, much more. I had a really fun time, and while justifying adultery still makes me uncomfortable, in the end, everything mostly works out. All the songs and the cast are absolutely fantastic. Even the songs that involve sketchy themes are catchy and get stuck in your head. The sets really give off a true diner feel and even the band onstage seems to fit in with the regular patrons of the restaurant.

As long as you head into this musical with appropriate company and an idea of what to expect, you’ll have a fantastic time.

Waitress is playing at The Dr. Phillips Center for the Performing artsthrough March 25.

I recommend a minimum viewing age around 13 to 15, depending on the child. The show does contain strong language and (fully clothed) sex scenes.