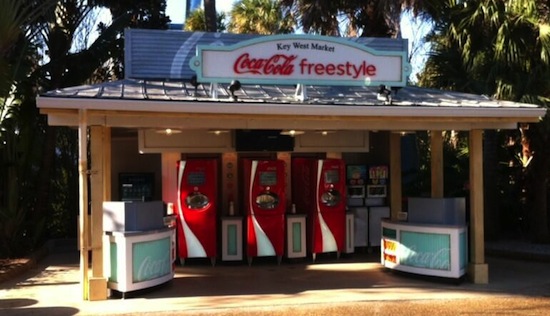 It began at Universal Studios, and then spread to Downtown Disney. Unexpectedly, they appeared at SeaWorld Orlando at the end of March. Coke Freestyle machines have arrived, and they may have the potential to change Central Florida’s theme parks forever.

Coca-Cola Freestyle, a drink machine rolled out by the Coca-Cola Company in 2011, is a self-service drink dispenser that offers more than 120 drink options from the Coke beverage lineup. Beverage choices include everything from traditional Coca-Cola (plus six flavored options) to Seagram’s Diet Ginger Ale (available in six different flavors) and Powerade (available in eight flavors). A full list of flavors offered by Coke Freestyle can be found here, but availability may vary by location. 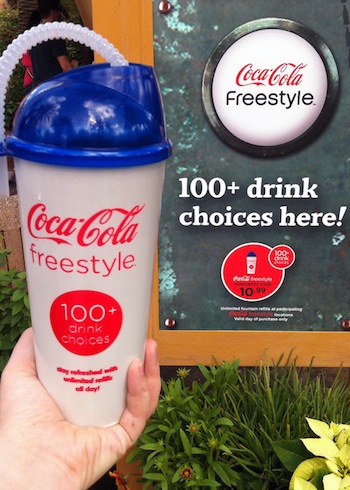 Locations
Coke Freestyle is now available at each of the restaurants/areas listed below:

Each of Orlando’s theme parks is working to integrate Coke Freestyle into its beverage offerings and operations, but some may have more trouble than others successfully doing so. Universal Orlando was the first to implement Coke Freestyle across its parks, Universal Studios Florida and Islands of Adventure, and make the machines available at multiple locations. Universal was also quick to capitalize on the newest addition to its parks by rolling out a refillable specifically for Coke Freestyle. You can read our review of the refill system here.

SeaWorld has been following Universal’s example. A drink location in the Key West area of the park now features three of the machines, and more are on the way. Although Coke Freestyle has been neither announced nor confirmed for SeaWorld’s Antarctica: Empire of the Penguin, Coke Freestyle was available at a number of stops on the Epic Voyage tour that promoted the new attraction throughout the United States. Keeping this in mind, we can likely expect to see Coke Freestyle available in the dining area for the new attraction.

Walt Disney World, on the other hand, may struggle to make Freestyle an option for guests. Although machines have been installed in Splitsville, the ESPN Wide World of Sports Grille, AMC Downtown Disney and Hess Market Locations, the design of the machine fits with those surroundings. However, it will be challenging to make a Freestyle machine fit the theme of Fantasyland at the Magic Kingdom, the country pavilions at Epcot’s World Showcase or the themed dining locations of Animal Kingdom. It will be interesting to see if and how Disney will continue to add Coke Freestyle throughout the resort.

So what does this mean for guests?
Guests can expect a wider selection of beverage options at the Orlando theme parks. They can choose from the 120 plus flavors provided by the machine, but they also have the option to mix different flavors to come up with new beverage creations. A few of our favorite example combination recipes include Dreamsicle Coke (½ Orange Coke, ½ Vanilla Coke), Mai Tai (Fanta Orange, Fanta Peach, Minute Maid Lemonade, Hi-C Fruit Punch and Dasani Lime) and Very Berry Lemonade (Strawberry Minute Maid and Raspberry Minute Maid). There are more than 14,000 two drink combinations alone, so the possibilities for creative mixtures are almost endless.

Forever Changed?
Over the past decade, Central Florida’s theme parks have re-focused on the creation of immersive, thematic attractions and experiences that transport guests to a world different from their own. Universal’s Wizarding World of Harry Potter, Disney’s New Fantasyland and now SeaWorld’s Antarctica all raise the bar on theming. The Wizarding World and New Fantasyland both feature their own dining locations with food options that fit well into the themed area, and both feature signature beverages (Butterbeer and LeFou’s Brew). SeaWorld will also be opening a new dining location, which will recreate a scientific research camp in the Antarctic. 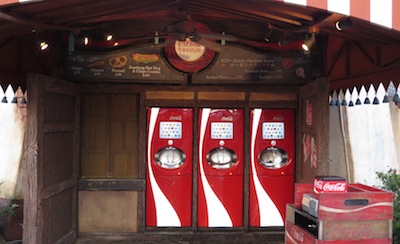 Now consider Coke Freestyle. Each drink is mixed to order inside the machine; when someone requests a Cherry Coke the machine combines syrups for Coke and the cherry flavor, and then dispenses the drink selection. Theme park culinary teams could easily work with Coca-Cola mixologists to develop new and unique beverage options. With this emphasis on thematic food and drink options, it’s easy to imagine a theme park world where every themed land is home to a Coke Freestyle machine that has a flavor specifically developed for that location.

As a possibility, consider the new Transformers the Ride 3D attraction at Universal Studios Florida that is expected to soft open soon. At Universal Studios Hollywood, a new beverage called Energon was released when the same attraction opened in 2012. Universal Studios Florida could import the recipe to the Orlando parks, but they could just as easily work with Coca-Cola to develop a drink matching the Transformers theme to be dispensed in the parks’ Freestyle machines. Or SeaWorld could create a specialty brew of its own for the Empire of the Penguin attraction.

(UPDATE: May 14, 2013 – SeaWorld has announced they will have a special Coke Freestyle drink available in Antarctica: Vanilla South Pole Chill. There’s no word on the exact ingredients. They will also offer a Coke Freestyle “Cup That Cares” that will track your CO2 savings with each refill in Antarctica.)

Hopefully we’ll begin to see Orlando’s theme parks utilizing their newest additions to their fullest potential in the near future. Meanwhile, expect to see Coke Freestyle machines popping up all over Orlando’s theme parks, restaurants and tourist spots in the months and years to come.

• Ashley Nichols is the editor of Theme Park Foodie, a blog that highlights dining and cuisine opportunities at theme parks throughout the United States with a focus on Central Florida. Her interest in the amusement industry’s food offerings began in 2010 when she served as a seasonal team member at an Orlando-area theme park and was repeatedly asked for referrals to the park’s best restaurants or dining options. Follow her on Twitter @ThemeParkFoodie.

Personally, I doubt you’ll see anything but Coca Cola products ever coming out of the FreeStyle machines. Coca Cola is big enough that they don’t really need to develop “boutique” products to be sold in a single location.

Also, I’m pretty sure the FreeStyle machines don’t mix your syrups before they dispense. For instance, if you choose Orange Coke, the machine will simultaneously dispense proportionate amounts of carbonated water, Coke syrup, and orange syrup, and they just basically mix in your cup as they’re dispensed.

And I do hope that Disney will take the time to theme the FreeStyle machines a bit, rather than just sticking them in as they come. I think this is pretty likely, considering they seem to have specially themed the self-serve soda fountains in “Be Our Guest”.