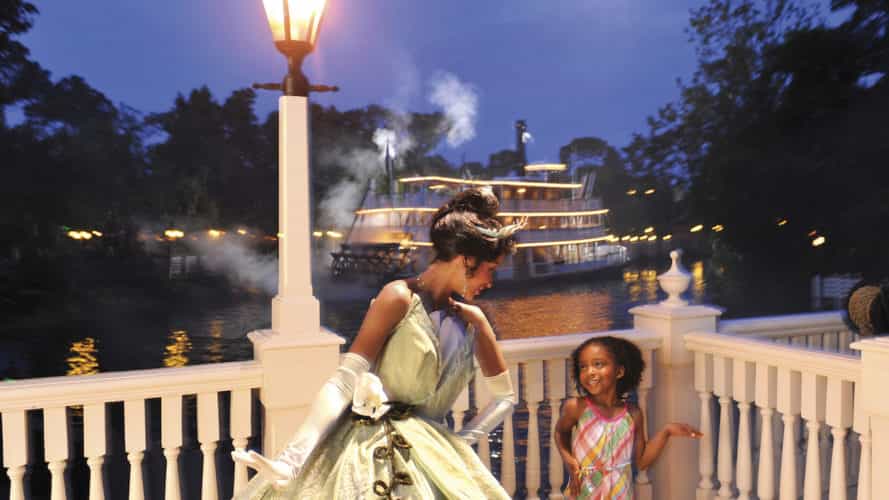 Tiana’s Riverboat Party Ice Cream Social & Parade Viewing party will make its debut on the Liberty Belle Riverboat at Magic Kingdom Park on November 29. The afternoon event starts at the boat dock, where guests can enjoy includes a variety of desserts, hand dipped ice cream with toppings, ice cream novelties, snacks and non-alcoholic beverages while they visit with Princess Tiana and Naveen.

Guests will then board the riverboat for birds-eye-view parade viewing for the park’s “Disney Festival of Fantasy Parade” and a cruise around Tom Sawyer’s Island. Princess Tiana and Naveen will join the group on the Liberty Belle Riverboat after the parade concludes for photos.

During the holiday period (December 23-31), guests will view the “Mickey’s Once Upon A Christmastime Parade” instead. The party will be unavailable during the Riverboat’s planned refurbishment on January 3-12, 2017.

Check-in for the party begins 45 minutes prior to the parade starting time. Due to the party, the Liberty Square Riverboat attraction will be unavailable to regular park guests from two hours before the afternoon parade steps off, until approximately one hour after.

Tiana’s Riverboat Party Ice Cream Social & Parade Viewing is available for $49 per adult and $29 per child age 9 and under (includes tax). Reservations can be made now by calling 407-WDW-DINE, and you can watch our full video of the Festival of Fantasy parade’s debut performance here: