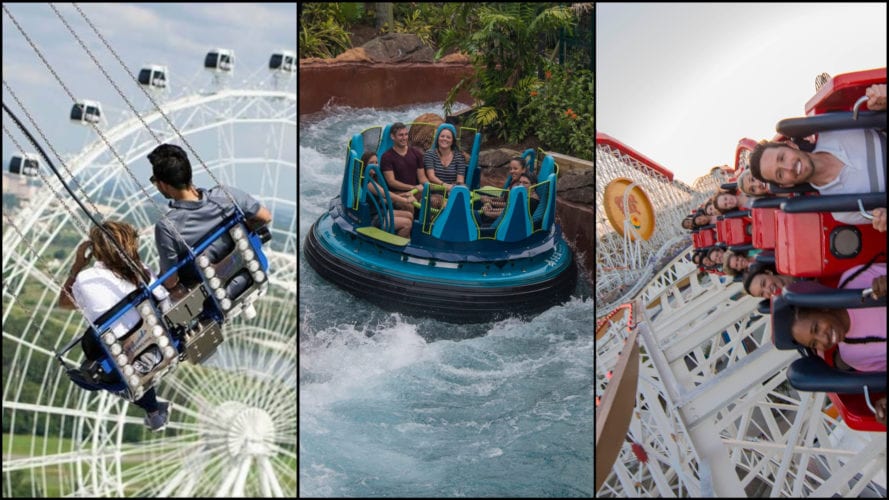 This year, our video coverage took us all over the world – from Branson to Paris, Dubai to Anaheim, and many places in between.

NOTE: Many of our most popular videos this year were uploaded in past years, but unless noted, these videos represent the top 10 that were posted in 2018.

10. Digging for Dinos at the Boneyard Playground | Attractions Kids

In 2018, we started a new video series titled “Attractions Kids,” showcasing all the fun things that families can do around the theme parks from a kid’s point of view. This past year saw videos at water parks, kids’ shows, unboxings, playgrounds and more, and even more planned for 2019! Our first video in the series was all about The Boneyard playground at Disney’s Animal Kingdom, which you can view above.

POV (Point of View) videos of new rides that open are always a huge hit, since people want to see what the experience is like. The Incredicoaster isn’t a new ride, per se, but it is a new theming of a classic roller coaster. When Disney California Adventure re-themed Paradise Pier into Pixar Pier, they turned California Screamin’ into The Incredicoaster, with elements based on Disney/Pixar’s “Incredibles 2.”

New rides opened all over the world this past year. Over in the United Arab Emirates, Motiongate Dubai opened its gates to rides based on many Hollywood films, including “Ghostbusters,” “The Hunger Games,” “How to Train Your Dragon,” and more. A “Shrek” dark ride was one of the new rides in the Dreamworks area, which re-tells the story of the first film in puppet form.

SeaWorld Orlando opened their first-ever river raft ride in 2018 called Infinity Falls. The attraction also broke the record for “World’s Tallest Drop” on a raft ride. As you can see in the video above, it’s hard to ride Infinity Falls and NOT get wet.

Halloween haunts are a huge hit every year. From Halloween Horror Nights to Knott’s Scary Farm, there’s no shortage of ways to get scared around the Halloween season. Warner Bros. Studio Tour in Hollywood held their Horror Made Here event this past year, featuring properties that horror fans know and love, including “IT,” “The Conjuring,” and Freddy and Jason. One of the houses was unique for the event: a Batman villain-themed house featuring the Joker and several other DC Super Villains.

One of the biggest openings at Walt Disney World in 2018 was Toy Story Land, a brand-new area where guests can shrink down to the size of a Green Army Man and play in Andy’s backyard. The land features a new entrance for Toy Story Mania plus two new rides: Alien Swirling Saucers, and Slinky Dog Dash. Slinky Dog is Disney’s first-ever double launching roller coaster and is great for families young and old.

Disneyland Paris held their inaugural Disney FanDaze special event at Walt Disney Studios Park this past summer. Disney fans from around the world traveled to France to experience many rare character meet-and-greets, special one-night-only shows and parades, and much more. At the end of the party, every single character who appeared at the event took part in a goodbye parade. That’s over 100 different Disney and Pixar characters!

3. IT Haunted House – It Knows What Scares You at Warner Bros. Horror Made Here

As mentioned earlier, Warner Bros. Studio Tour’s Horror Made Here event featured several iconic horror films and properties. One of the most popular houses was this one based on the recent film, “IT: Chapter One.”

NOTE: We strongly do not encourage guests to brings their phones or cameras onto rides where they are not allowed. Any time we have video of a new ride or show, it is with the permission of the park or attraction.

This video is pretty remarkable. During a recent visit to the Orlando StarFlyer on International Drive, Cansel Yildirim accidentally dropped her iPhone 7 Plus while ascending the tower. Miraculously, the phone was not broken when it hit the ground and captured the entire fall.

1. Highlights from Disney on Ice presents “Dare to Dream”

Feld Entertainment has been doing tours of Disney On Ice around the world for many years. When a new show debuts, videos of the highlights generally get a ton of views, as many viewers want to see what the show is about if it’s stopping at a city near them. “Dare to Dream” featured several Disney Princesses, including the Disney on Ice debut of Moana. With over 2 million views in 2018, it’s safe to say that Disney on Ice is just as popular as ever.

Was one of your favorite videos represented in this list? If not, let us know what your favorite Attractions Magazine video from 2018 was in the comments below! 2019 is looking to be a HUGE year for new attractions around the world, so click here to subscribe to our YouTube channel to stay up-to-date on everything happening!