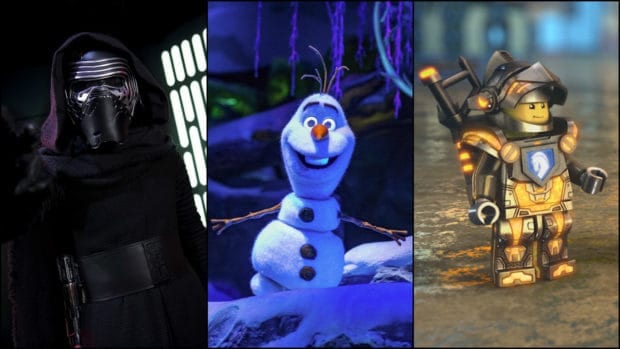 2016 saw a lot of new attractions and shows opening up in Central Florida, and we were there bringing you coverage of them all. Here’s a look back at the top 10 videos from our YouTube channel in 2016.

With Star Wars: The Force Awakens smashing box office records at the end of 2015, it’s no surprise that interest in new Star Wars-themed experiences were high in 2016. And even though the film initially debuted in 2013, you still can’t rule out the popularity of Frozen.

NOTE: Many of our most popular videos viewed in 2016 were uploaded in past years, but these videos represent the top 10 that were recorded in 2016.

After a decade of having their “castle party,” Dream Along With Mickey ended its run at the Magic Kingdom in April 2016. A couple of months later, Mickey’s Royal Friendship Faire debuted as the new castle stage show, featuring characters and songs from some of Disney’s more modern animated classics like ‘The Princess and the Frog’ and ‘Tangled.’ A new element to Friendship Faire is the addition of seasonal finales, with 2016 seeing special endings for fall and winter.

Much like on our 2015 top 10 video list, this video from the annual Disney Christmas Day special taping was a quick hit near the end of the year, due in part to the popularity of the Disney Channel original movie ‘Descendants.’ With a sequel coming in 2017, fans wanted a glimpse of stars Sofia Carson and Cameron Boyce performing on Main Street U.S.A.

Lots of Star Wars experiences debuted at Disney Parks around the country in 2016. One of the first was this interactive meet and greet with Kylo Ren inside the Star Wars Launch Bay at Disneyland in California (eventually debuting at Disney’s Hollywood Studios a short time later). Kylo Ren offers one of the most menacing meets out there, so it’s always fun to see how others interact with him.

Speaking of menacing Star Wars experiences, unique to Disney’s Hollywood Studios is this daily Stormtrooper march lead by Captain Phasma. This mini-show has changed some since the debut seen in this video, so if you haven’t seen it yet in person, check it out next time you’re at the park.

Of course 2016 saw the opening of Disney’s newest resort destination, Shanghai Disney Resort. Shanghai Disneyland’s debut gave guests many new, exclusive attractions and shows, including this daytime parade, Mickey’s Storybook Express. If you haven’t, head to our YouTube channel to see more videos from Shanghai Disneyland, as well as our vlog Attractions Adventures.

Another daily Star Wars experience that debuted at Disney’s Hollywood Studios in 2016 was Star Wars: A Galaxy Far, Far Away. This show features clips from all seven films and live appearances from several characters including BB-8, Darth Maul, Chewbacca and more. Recently, a new section debuted featuring scenes from Rogue One: A Star Wars Story and appearances from Death Troopers.

3. Frozen Ever After low light ride-through POV in Norway Pavilion at Epcot

Frozen continues to be a massive hit among guests, and 2016 saw the opening of the biggest Frozen experience in a Disney Park to date, the Frozen Ever After attraction in the Norway Pavilion at Epcot. Originally the home to Maelstrom, this boat ride takes guests to Arendelle and Elsa’s ice palace to come face to face with characters from the film and hear the hit songs, which have been rearranged to fit the attraction. Interest in the first-ever Frozen attraction was high when it opened, and our video jumped to over one million views in less than a month.

Not only did Kylo Ren begin meeting guests at Disney’s Hollywood Studios, he also joined the popular Jedi Training show outside Star Tours. While the kids participating don’t get to go one-on-one with Kylo, his menacing presence adds a fun finale to this daytime show.

1. Frozen – Live at the Hyperion highlights at Disney California Adventure

Frozen – Live at the Hyperion highlights at Disney California Adventure

As stated earlier, Frozen continues to be a huge hit for Disney, and with Florida getting the new attraction, California debuted a new musical stage show based on the film. This video highlighting the show went viral over the past six months its been up, and became our first video to ever break ten millions views! Just goes to show that Frozen will continue to be a big property for Disney.

Was one of your favorite videos represented in this list? If not, let us know what your favorite “Attractions Magazine” video from 2016 was! We’ll be continuing to give you videos from Central Florida, California, and around the world, so you don’t want to miss any of our videos in 2017. Click here to subscribe to our YouTube channel at youtube.com/attractionsmagazine.

Attractions The Show! – Disney’s Flurry of...

Photo Finds: A look at the details...