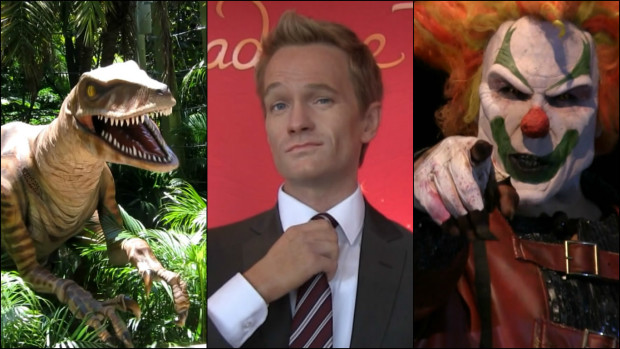 It was a big year for theme parks and attractions, and we were there covering all aspects of it. Here’s a look back at the top 10 videos from our YouTube channel in 2015.

This year saw the two biggest movie openings of all time with Star Wars and Jurassic World. With Owen’s raptors a popular part of Jurassic World, videos of raptor encounters at Universal’s theme parks made up three of our top five most viewed videos.

NOTE: Many of our most popular videos viewed in 2015 were uploaded in past years, but these videos represent the top 10 that were recorded in 2015.

A lot of big things were announced and shown during this year’s D23 Expo in Anaheim, and during the Parks & Resorts presentation, the first footage of the new Iron Man Experience coming to Hong Kong Disneyland was shown. What made this special was that they were “randomly” picking someone in the audience to win a trip, and the winner ended up being Stan Lee himself!

On our 2014 top 10 video list, Frozen dominated half of the videos. This video is the only Frozen-themed one to make the list this year. Even though this was the second year for the Frozen Summer Fun event at Disney’s Hollywood Studios, many changes were made to this parade from the first year, including a brand-new float for Elsa.

(Warning: Graphic content)
With this past year being Halloween Horror Nights’ 25th anniversary, a lot of excitement built up for what guests would get to experience during the event. People were anxious to see Freddy and Jason return to the event in a house based on the film Freddy vs. Jason. Another popular house celebrating the 25th anniversary would have been number 11 on this list.

Three new attractions officially opened at I-Drive 360 this past year: The Orlando Eye, Sea Life Aquarium and Madame Tussauds. The latter features detailed, life-like wax figures of many of today’s celebrities and public figures from history. This video featured a first look inside Tussauds before the grand opening and gave guests a look at what figures were going to be featured. Many of the figures in this video are different from what you’ll see in the museum today, as they change figures out often.

(Warning: Graphic content)
As stated a couple of slots ago, Halloween Horror Nights was not only celebrating its 25th anniversary last year, but also the return of one of its most popular icons, Jack the Clown. The Carnival of Carnage stage show also made a return as guests got to see Jack, Chance and his maniacs cause some mayhem to a few unfortunate victims live on stage.

Legoland Florida Resort opened their first on-site hotel, modeled after some of the other Legoland Hotels around the World. One offering that Florida’s Legoland Hotel has that others don’t, are rooms themed to the Lego Friends. Many people like to see video tours of rooms to see what’s inside, and since this was a first of its kind themed room, many were curious to see inside.

4. See a Raptor Hatch in the Jurassic Park Discovery Center at Universal Orlando

When “Jurassic World” was released last June, it had the biggest movie opening in history (that has since changed with the release of “Star Wars: The Force Awakens”). One of the most popular parts of the movie was Owen’s Raptor squad. The Jurassic Park area of Islands of Adventure at Universal Orlando has had this raptor hatching mini-show for some time, but thanks to Jurassic World, its popularity has risen. But Universal had another raptor experience up its sleeve for guests as you’ll see later in the list.

Every year there seems to be a surprise hit video we don’t see coming. In 2014 it was the Hiro & Baymax meet and greet. This this year it’s this look at the cast of Descendants filming for the Disney Parks Unforgettable Christmas Celebration. This video was just posted in November and has already surpassed one million views. This is due in part to the popularity of the Disney Channel original movie “Descendants”.

2. Face a Raptor inside Jurassic Park during new encounter at Universal’s Islands of Adventure

Not only can you see a raptor hatch at Islands of Adventure, but now you can come face-to-face with one. Debuting about a month before the release of “Jurassic World”, the Raptor Encounter gives brave guests a chance to walk right up to a moving raptor to have a photo taken. But be careful, sudden movements or even certain articles of clothing could set her off.

1. Meet a Raptor from Jurassic Park at Universal Studios Hollywood

A couple of months after the Raptor Encounter debuted in Florida, Universal Studios Hollywood in California opened their own version. The big difference here is that there is no fence between the guests and the raptor like in Florida. It’s both a meet and greet and a mini-show as the handlers bring the raptor out and position her for photos. Don’t run or she might run after you!

The success of Jurassic World combined with the debut of these two unique raptor experiences certainly contributed to these being our two most viewed YouTube videos of 2015!

Was one of your favorite videos represented in this list? If not, let us know what your favorite “Attractions Magazine” video from 2015 was! Don’t miss any of our videos in 2016. Click here to subscribe to our YouTube channel at youtube.com/attractionsmagazine.