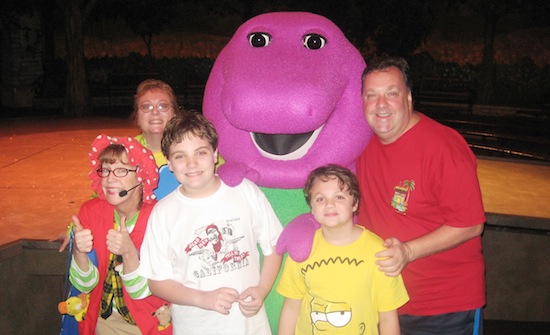 Over the course of the past 10 years, my wife and I have taken our son TJ, who has autism, on dozens of trips to Walt Disney World, Universal Orlando Resort and SeaWorld Orlando. During the course of these visits we’ve come to realize that there are certain attributes which can make an attraction extremely appealing to a child with autism.

Generally speaking, the attraction should be exciting rather than scary, bright and cheery rather than dark and threatening, and laid-back rather than loud and in-your-face. It also helps to a great deal if the child has some familiarity with the attraction or the characters it’s based on, either through movies, TV or video games. Children with autism are drawn to computers, so a technological element can be very appealing. Finally, animals, music and humor go a long way. With that in mind …

10. Kiliminjaro Safaris – Disney’s Animal Kingdom
Since embarking on an African safari is not a practical option for most families, this attraction provides the next best thing. It offers close-up views of lions, hippos, alligators and dozens of other animals, in their (recreated) natural setting. Some, like the giraffe, may even wander right past your jeep, offering some awesome photo ops.

9. Spaceship Earth – Epcot
Housed inside the giant “golf ball” at the entrance to Epcot, Spaceship Earth takes travelers on an informative and entertaining journey through the history of communication, from cave paintings through the Internet. Best of all, the attraction now features an interactive element which allows you to program your future. Through the magic of digital technology, your picture is taken, you answer a few questions on the vehicle’s touch screen and voila: you’re staring in a clever animated film which plays as your time-travel vehicle descends back to Earth.

8. One Ocean – SeaWorld Orlando
This thrilling extravaganza is better than ever, with dancing fountains, global rhythms and spectacular performances by its cetacean stars. However, you need to arrive at least 30 minutes early, as the theatre often fills to capacity. Normally this would be a deterrent as TJ, and many other autistic kids, do not do “waiting” well. However, the theater here is an attraction in itself; its giant screens display eye-popping special effects, short films about whales and even text messages sent in from the audience. It makes the wait seem like a drop in the ocean.

7. Soarin’ – Epcot
One of the most popular attractions in Epcot (indeed in all of Disney World), Soarin’ is a journey through the natural splendour of California. A gently swaying ride over vibrant images projected on a giant screen, accompanied by soothing music, sumptuous natural scents and even fireworks, Soarin’ provides the perfect multi-sensory experience for a child with autism.

6. Shrek 4-D – Universal Studios Florida
Few animated characters have ever appealed to children as much as Shrek, and the big green guy really comes to life in this hilarious 3D film. The fourth “D” refers to a few special effects (spraying water, moving seats) which amuse rather than frighten. As an added bonus, you can purchase a DVD of the film (in a combo pack with the first “Shrek” movie) in the attraction’s git shop, complete with 3D glasses for home viewing.

5. The Great Movie Ride – Disney’s Hollywood Studios
This clever and humorous journey through the movies features recreations of many childhood classics, including “Mary Poppins,” “Fantasia” and “Raiders of the Lost Ark.” The highlight, however, is the awe-inspiring “Wizard of Oz” set, complete with multiple munchkins, one very Wicked Witch and a sing-along as you follow the yellow brick road.

4. Seuss Landing – Universal’s Islands of Adventure
OK, OK, I know this is not an attraction, it’s an entire section of the park. But Seuss Landing is really an experience unto itself. Bright, colorful and brimming with memorable characters, it fully immerses you in the whimsical world of Dr. Seuss. And all of its attractions feature familiar excerpts from those wonderful books which continue to entertain and educate children to this day.

3. Carousel of Progress – Magic Kingdom
This charming yet often overlooked show offers a glimpse of the future as seen through the eyes of a typical American family, from the turn of the century through to present day. What makes the Carousel such an appealing family attraction is its humorous portrayal of everyday family life, a unique theater which rotates from scene to scene, and a very the catchy theme song, “There’s a Great Big Beautiful Tomorrow.” In fact, on our first visit to Disney World, TJ, who did not speak much at the time, actually asked for this attraction (he called it “Tomorrow”), which he had seen on an episode of “The Wonderful World of Color” on DVD. Following the show, he broke into an impromptu rendition of the theme song as we left the theatre.

2. A Day in the Park with Barney – Universal Studios Florida
This lively stage show features everyone’s favorite purple dinosaur, all his friends and a slew of instantly recognizable greatest hits. What’s more, the attraction is especially sensitive to children with disabilities, as they are allowed to stay in the theater after the show for a private photo session with Barney (others can wait in the play area outside). In fact, the first time we saw this show one of the characters, Mrs. Peek-a-boo, somehow noticed TJ while she was performing, approached us after the show and greeted TJ by name.

1. It’s a Small World – Magic Kingdom
This perennial Magic Kingdom favorite, a cheery trek around the globe with children of many nations, has always been one of the first things TJ asks for when we get to the Magic Kingdom. While the uber-cheery theme song, played ad infinitum throughout the ride, can grate on one’s nerves, its repetition and familiarity actually seems comforting to TJ. And be sure to watch for the big clock out front while waiting in line; it springs to life every 15 minutes. 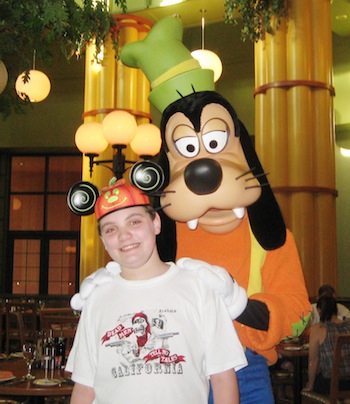 3. Character Meals
Encountering a character in a theme park can be a difficult experience for an autistic child. They can see their favorite characters but can’t just run over to them; they have to wait, in line, in the heat. Another option for meeting Mickey, Donald, Goofy and others is to enjoy a character meal, offered at several restaurants in the parks and resorts. During the meal, various characters stop by the table to meet and greet your child, on his or her own terms, in a quiet and comfortable environment, thus allowing you to relax and enjoy your meal. As an added bonus, most character meals are buffets, offering a variety of foods while eliminating that dreaded wait, which can be especially nerve-wracking with a hungry autistic child.

2. Tomorrowland Transit Authority PeopleMover
Located in Tomorrowland at the Magic Kingdom, this relaxing attraction can be the perfect remedy for fussy children on a hot, crowded day at the park. The PeopleMover takes you on pleasant journey around and through Tomorrowland’s attractions, as you sit back and take in some spectacular views of the park. So light is the crowd at this minor attraction that you can usually stay on and ride again; just ask the attendant who greets you at the end.

1. Guest Assistance Pass
A child with autism has difficulty understanding the concept of time in general, not to mention the agony of having to wait for something he really wants. And so the discovery of the Guest Assistance Pass was a watershed event in our vacationing existence. Designed to assist people with physical or developmental disabilities, as well as their families, this free pass allows for accelerated access to any attraction, either through a separate entrance for disabled guests, or through the attraction’s express entrance. Disney, Universal and SeaWorld all offer this service. Simply go to Guest Relations, explain your situation and obtain the pass.

My 9 yr old son has sensory issues and his favorite ride is Tomorrowland Transit Authority. To him it is the best…it isn’t loud, he can see into other attractions from a safe distance and he doesn’t have to wait in line. I think one trip we rode TTA 30 times in one day. We always joke that you can tell how crowded the park is by the line at Tomorrowland Transit Authority.

I love your article! I hope they post another one of your articles on the website (hint, hint). By the way, I am not your 11 year old son.

For some reason I cannot fathom it has gotten very crowded in the last year or so. They may even need to make it as FastPass Attraction!

Out of the loop: NASA Goddard in...