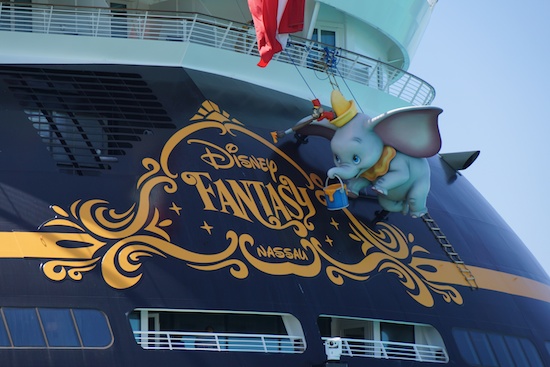 Ok, it’s not just our top videos from the brand new Disney Fantasy cruise ship, it’s all of our videos. But they’re all great! Let’s start with our overview of the ship as featured on this week’s Orlando Attractions Magazine – The Show. The Disney Fantasy segment starts 13 minutes into the show:

Two of the elevators on the Fantasy offer a unique view through the glass. You’ll not only see into the lobby atrium, but you’ll see many familiar Disney and Pixar characters flying through the sky as you go up or down. Each elevator has different characters.

The Muppets have come to the Fantasy. The Midship Detective Agency game debuted on the Disney Dream, but on the Fantasy, guests have the added option of playing the Muppets game. You’ll visit many of the enchanted artwork pieces around the ship to play games and follow the clues to solve the mystery.

Guests at the Animator’s Palate restaurant on the Fantasy can have their drawings come to life with a little Disney magic by Mickey Mouse.

A Point-Of-View ride on the Aquaduck water coaster. It’s the same as on the Disney Dream cruise ship with some added lights in the tunnel. At the end of the video is a look at the Aquaduck running at night during a deck party.

The “Buccaneer Blast” fireworks show features Capt. Jack Sparrow and is part of “Mickey’s Pirates in the Caribbean” party. The video starts with a portion of the “Hunt fer Jack” show. The fireworks behind the Aquaduck water coaster make a unique view.

The Skyline Lounge in the Europa nightclub area features photographs of different European skylines. But the Disney Imagineers have animated the photos with video realistic cars, people and more. The venue’s nine “windows to the world” are actually 65-inch LCD screens. The closer you get to the screens, the more details you can see, down to the outlines of people moving around in their homes. Depending upon the time of visit, the skyline may be that of Athens (Greece), St. Petersburg (Russia), Barcelona (Spain), Budapest (Hungary), Florence (Italy), London or Paris.

When the Disney Dream sailed past the Fantasy at Castaway Cay, the two ships began blowing their horns, showing off the different songs they can play.

Watch as babies and toddlers race (or parents try to get them to race) during Jack Jack’s Incredible Diaper Dash.

We saw three different musical stage shows during our preview cruise. Here are highlights from each:

Many of the Disney characters, including princesses meet guests on the last night of the Disney Fantasy cruise, then perform a special goodbye song in the atrium lobby. See Ya Real Soon!

Click Here to see our favorite photos from the Disney Fantasy.

Favorite photos and details from the Disney Fantasy cruise ship

Review: Is the Star Wars Galactic Starcruiser worth...

thanks for this post. That Disney ship looks awesome! I was wondering, I’m heading off to Disneyland Paris soon and wondered if you had been before and whether you had any tips?

Important tips to beat the heat in...