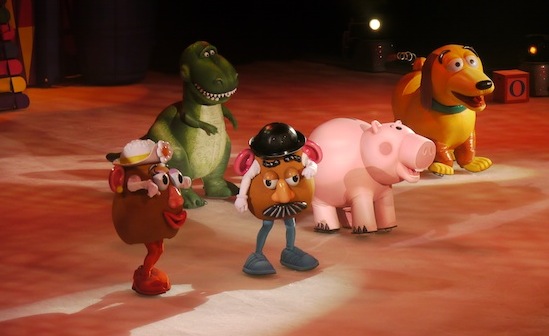 This summer’s hit Disney-Pixar movie has hit the ice. After a stop in Lakeland and Orlando, Toy Story 3 presented by Disney On Ice, is skating through its two-year, 75 city tour.

An award-winning creative team and a cast of world-class skaters are bringing Woody, Buzz Lightyear, Jessie, and the rest of the gang to fans and families in this brand-new live ice show produced by Feld Entertainment.

To enhance the live experience, the production features a new ice projection design. This technology, a first for any Disney On Ice show, blends four separate images into one massive projection using the entire ice surface to create oversized effects and scenic elements.

Memorable scenes take on a new life as a pinball machine of monumental proportion is created at Pizza Planet, with the massive pinball table projected onto the ice and the score board on the stage behind it. You’ll see characters on the ice, above the ice and interacting with props. 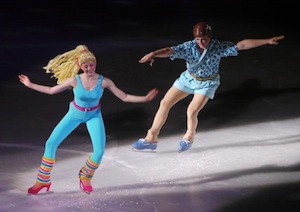 Although the overall story is Toy Story 3, the first half of the show has the characters reliving some of their favorite memories from Toy Story and Toy Story 2. The show begins as Andy prepares for college and is deciding the fate of his favorite childhood pals. Woody reminds the gang that they are still Andy’s toys and they reminisce over their many adventures as Buzz Lightyear defeats Evil Emperor Zurg; Woody meets up with Jessie on the set of their TV show, “Woody’s Roundup”; and Slinky Dog, Rex, Bullseye, Hamm, Barbie, and Mr. and Mrs. Potato Head and others keep the audience laughing. Mickey, Minnie, Donald and Goofy even make an appearance.

After an intermission, the troupe of toys takes matters into their own hands when they find themselves trapped at Sunnyside Daycare and at the mercy of some rambunctious toddlers. A toy box full of new faces, led by Lots-o’-Huggin’ Bear, temporarily detains them, but thanks to Woody, they devise a plan to get back home again.

In addition to the great music from the Toy Story films, adults (and kids) will enjoy some unexpected music including a great scene with the Little Green Men and Buzz dancing to the Star Wars Cantina song. (See video below.)

“[This] is the only place where you can experience the excitement and adventure of Toy Story 3 and the defining character moments of Toy Story and Toy Story 2 right in your hometown,” says Producer Kenneth Feld. “We’re bringing families the ultimate Toy Story experience in a sensational live production.”

Scenes from Disney-Pixar's Toy Story 3 on Ice at the Amway Arena in Orlando, Florida

After its debut season, the show will tour the West Coast in 2011-2012 before traveling overseas in the fall of 2012.