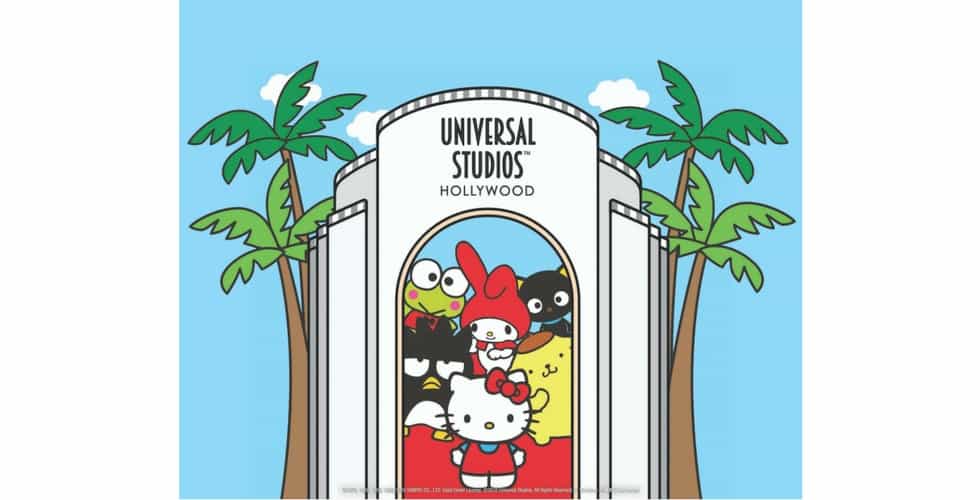 Hello Kitty and her other Sanrio friends like My Melody, Chococat and Keroppi are featured in a selection of park-exclusive merchandise, including apparel, accessories, souvenirs, stationery and collectibles.

A variety of confectionary treats are also available and prepared fresh daily, including themed s’mores, fudge, cupcakes and caramel apples.

The exclusive merchandise merges Sanrio characters with classic Universal properties like “Jaws,” “Back to the Future,” “E.T. The Extra-Terrestrial,” as well as Universal Studios Hollywood attractions like the Studio Tour, Jurassic Park – The Ride and King Kong 360 3D. New park-exclusive merchandise will be released at this store regularly.

The Animation Studio Store will also feature the popular Hello Kitty Build-a-Bow area, where guests can customize their bow with a variety of options. Guests who purchase any Sanrio item will receive a complimentary Hello Kitty Hollywood-themed temporary tattoo, keeping with Sanrio’s “small gift, big smile” philosophy that is demonstrated across all of the company’s retail stores and events.

Hello Kitty herself will also make appearances right outside the entrance to the store. Wearing a red pleated dress decorated in film strips, Hello Kitty will meet and greet her fans by a collection of Sanrio-themed topiaries, including Keroppi, My Melody and Chococat, as well as window displays showing the characters making movies and enjoying Universal Studios Hollywood.

Along with Hello Kitty, the Animation Studio Store will feature merchandise from Illumination Entertainment films like “Despicable Me,” and DreamWorks Animation films like “Kung Fu Panda.” A selection of products from other animations including Dr. Seuss, Scooby-Doo, SpongeBob SquarePants, “The Simpsons” and Curious George will be available.

The Animation Studio Store is located in the heart of Universal Studios Hollywood in an all-new 6,000 square foot structure that is inspired by California Mission revival architecture similar to the Golden Age of Hollywood in the 1930s. The retail space fuses animated characters with style throughout the Spanish architectural design.

For more information on the Animation Studio Store, visit UniversalStudiosHollywood.com.