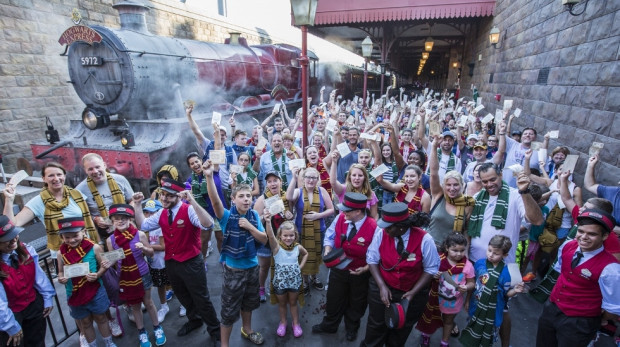 Just a month after opening, a major milestone has been reached at Universal Orlando’s Wizarding World of Harry Potter.

Cheers from guests filled the air at Hogsmeade Station as Universal celebrated its one millionth rider on the Hogwarts Express, the iconic train that transported Harry Potter and his friends between Hogsmeade Station and King’s Cross Station in J.K. Rowling’s series. To celebrate this magical milestone, nearly two hundred guests were given complimentary Butterbeer ice-cream.

In early July, guests began boarding the Hogwarts Express to travel between The Wizarding World of Harry Potter –Hogsmeade in Universal’s Islands of Adventure and The Wizarding World of Harry Potter – Diagon Alley in Universal Studios Florida. The journey, which requires a park-to-park ticket, combines storytelling, live special effects, lifelike animation and state-of-the-art technology to take riders on the journey of a lifetime.

See complete POV’s of both trips aboard the Hogwarts Express in our videos below: