Universal Parks & Resorts and Loews Hotels & Resorts announced this morning that they will be building a new hotel development at Universal Orlando that will add high-quality, high-value options for families wanting an affordable on-site experience. 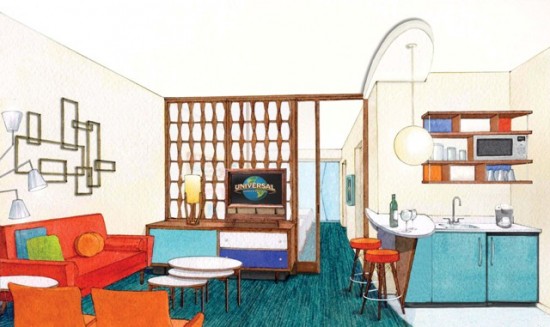 Dubbed Universal’s Cabana Bay Beach Resort, it will offer two distinct experiences within the development’s multiple buildings: 900 family suites, capable of sleeping six, that include kitchen areas and 900 standard guest rooms offering both moderate and value-priced accommodations. It will be operated by Loews Hotels & Resorts and is scheduled to open in 2014.

The hotel will be themed differently than anything else currently available at Universal Orlando. It will feature a hip and vintage look and evoke the driving vacations so many Americans grew up enjoying with their families, spending time at sweeping motor courts just off the highway, where families relaxed and played after a long day’s drive. Inside areas including the lobby, dining areas and large, comfortable rooms. The hotel will also have two themed pool areas.

“Our new hotel will give guests an affordable, incredibly themed on-site hotel experience unlike anything else at our resort,” said Tom Williams, chairman and chief executive officer, Universal Parks & Resorts. “Our new family suites and family-value pricing will give our guests on-site options they’ve never had before.”

The new hotel will allow families to choose between value pricing or the higher level of benefits and service that come with staying at the other on-site Universal Orlando hotels- Loews Portofino Bay Hotel, the Hard Rock Hotel and Loews Royal Pacific Resort. It will provide early park admission, proximity to Universal’s Islands of Adventure and Universal Studios and resort-wide charging privileges, but will not offer complimentary Universal Express Unlimited Access. 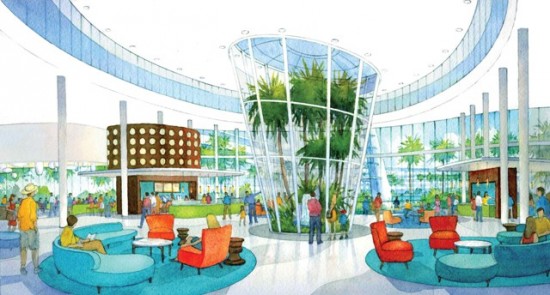 The hotel will be built on a 37-acre site within Universal Orlando Resort and adjacent to Universal’s Islands of Adventure, just off Hollywood Way and Turkey Lake Road. Site work will begin soon. Pricing information, opening time frames and room reservation dates will be released over time. Stay tuned to Orlando Attractions Magazine for more information on this new on-site hotel.

It looks nice but it’s beond me why they didn’t opt for a Harry Potter themed hotel.

New ‘Beauty and the Beast’-themed bar to...