Universal Orlando to have a ‘big’ announcement on Nov. 1 – Transformers is rumored but is there more than meets the eye?

Universal Orlando Resort teased on their Facebook page that something big is coming to their parks soon. If you’ve been to Universal Studios lately, you can see that’s clearly the case with two big construction projects going on. One is rumored to be a Transformers ride and the other the Wizarding World of Harry Potter expansion. The announcement will take place at 7:30 p.m. on Nov. 1, 2012.

Below is the statement that Universal Orlando Resort released on their official Facebook page:

The countdown has begun fans: we’ve got something BIG coming to Universal Orlando. So BIG, it will blow your mind when the clock strikes zero. What could it be…?
Countdown with us and check back on Nov 1st at 7:30pm to find out!

A fan did a little digging and found that in the web coding for the countdown clock, it was titled “TransformerCoundown_clock.swf”. After that was found out, it was quickly changed to “uorclock.swf”.

Below is an overhead photo of the construction site for the rumored Transformers ride which clearly shows a track layout. Universal Hollywood opened their Transformers ride earlier this year and while being constructed, looked very similar. 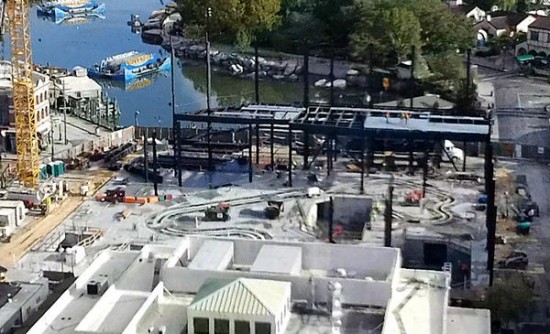 While nothing official has been released yet, it is rumored that this announcement will be about the rumored upcoming Transformers ride, but will that be all? Will we get more information about the future Wizarding World of Harry Potter expansion, or something more? Stay tuned.

Movie Review: Find out the secret of Tinker Bell’s wings in the latest Disney Fairies release

This is still bull shit. Transformers was an okay movie… but Jaws is a classic. its terrible that the took it out. I swear to god if the ever get rid of E.T. I’m never going to the park again, and I know many people who feel the exaact same way.