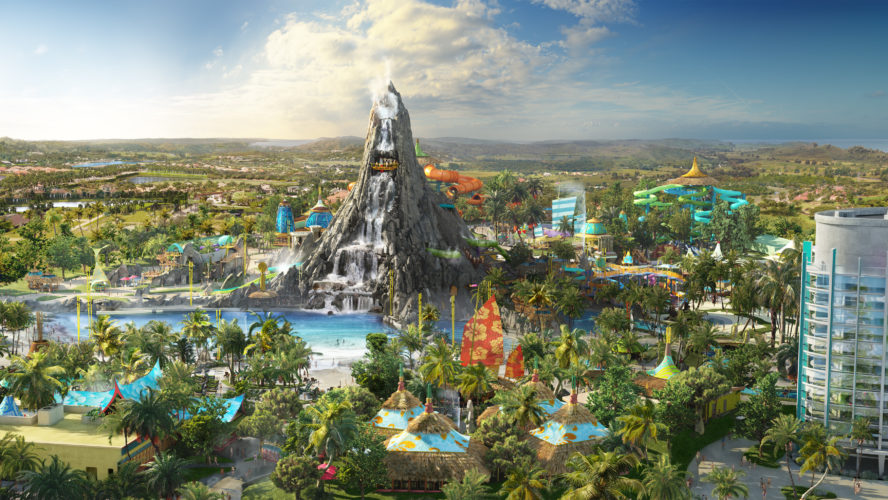 In less than a year Orlando will be home to another moist major attraction, because Universal has unveiled fresh details about their under-construction Volcano Bay water theme park, including a June 1, 2017 date when international tickets will become valid.

Universal Orlando revealed new concept art, attractions details, and more about their upcoming Volcano Bay water theme park on June 21, 2016, at the IPW 2016 travel industry convention. The resort has not officially announced a grand opening date for the park yet more specific than “2017,” but Universal did announce that tickets will soon be available to international visitors through foreign web sites and travel professionals for travel dates beginning June 1, 2017, indicating at a “soft opening” or “technical rehearsal” is expected by that date.

Universal Orlando describes Volcano Bay as “a lush, tropical oasis that unfolds before you, instantly transporting you to a little-known Pacific isle. In the distance, a colossal volcano rises above a sparkling beach, boasting majestic waterfalls by day and blazing lava by night.”

Universal’s Volcano Bay is billed as a “radically-innovative water theme park” that will span 28 fully immersive acres. It is being marketed as “Universal Orlando’s third theme park” and an entirely new kind of water theme park experience. This one-of-a-kind park will combine exhilarating experiences with hassle-free convenience so families can get the most out of their vacation together. They won’t have to stand in long lines or wrestle with tubes before diving into the unique attractions found throughout the park. They can enjoy a variety of experiences, ranging from winding rivers and private, two-story cabanas to family raft rides and twisting body slides that launch guests above the water. 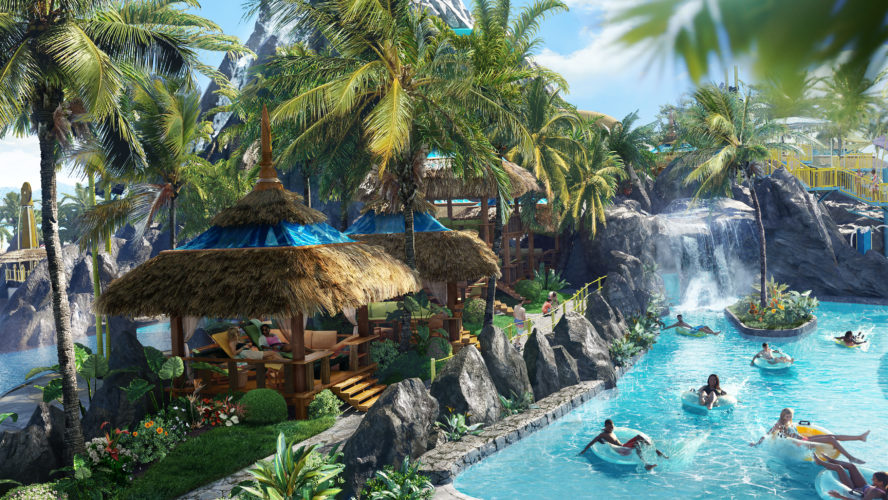 Volcano Bay’s four Primary Areas (a.k.a. lands) each has a unique imaginative theme:

1. Krakatau: The 200-foot volcano, Krakatau, will lie at the heart of the park, inviting guests to venture through its hidden caverns and cascading waterfalls.
• A state-of-the-art marquee attraction found only at Volcano Bay. More details will be announced later.
• Three distinctive body slides found at the rear of the volcano, which start off with surprise doors that drop out from beneath guests:
Ko’okiri Body Plunge: A racing, 70-degree drop that will plummet 125-feet through the center of Krakatau. It will be the world’s first slide to travel through a pool filled with guests.
Kala and Ta Nui Serpentine Body Slides: Two intertwining slides where guests will fall freely along 124 twisting feet.
Punga Racers: A high-speed race through four different enclosed slides featuring manta-shaped mats.

2. Wave Village: Located at the base of Krakatau, Wave Village will be home to:
• Waturi Beach: A sparkling, multi-directional wave pool where guests can swim, relax on the sand or indulge in private, one- or two-story cabanas.
• The Reef: An adjacent leisure pool will provide guests with calmer waters and exciting views of riders speeding through the Ko’okiri Body Plunge. 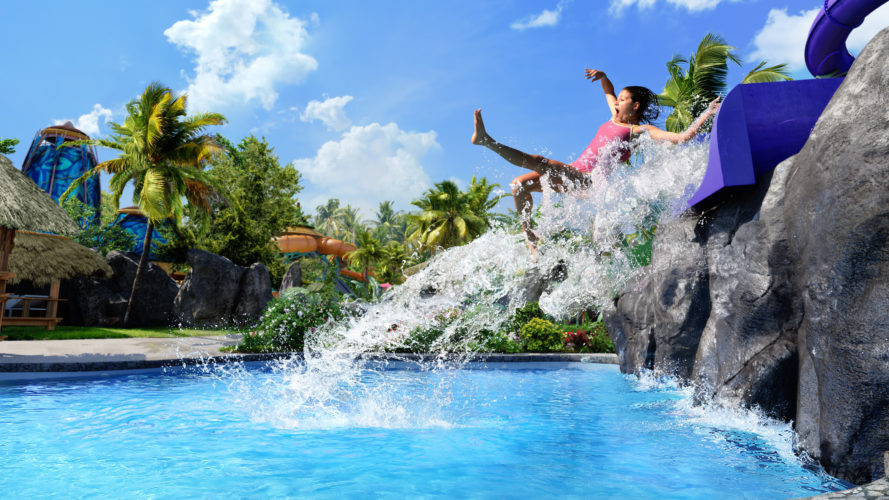 • An Innovative Water Theme Park Experience: Volcano Bay will redefine the queue experience so guests can focus entirely on having fun and spending time together. Guests won’t even have to carry their own rafts up the slides. A wristband-based timed return system, similar to the once currently testing at Wet ‘n’ Wild, is expected to reduce or eliminate standby queues, essentially bringing FastPass-style reservations to the water park experience.

• 18 Unique Attractions in Four Imaginatively-Themed Areas: Volcano Bay will offer 18 unique attractions ranging from daring to serene. They’ll be divided across four primary park areas where there’s something for everyone, including a multi-directional wave pool with sandy beaches, peaceful winding river, twisting multi-rider raft rides, speeding body slides that drop from the top of the volcano into the waters below – and a state-of-the-art marquee attraction that will be revealed at a later date.

• An Award-Winning Team of Creators: A place like this could only be brought to life by Universal Creative – the same team behind ground-breaking theme park experiences like The Wizarding World of Harry Potter, The Amazing Adventures of Spider-Man and Despicable Me Minion Mayhem. The team researched water parks and tropical resorts around the world to help redefine the water park experience and shape their vision for Volcano Bay.

• Easy-to-Access, Resort-Like Amenities Throughout the Park: Each area of the park will offer its own easy-to-access, resort-like amenities, such as concierge locations and lockers, so guests won’t have to stroll out of their way to get what they need. There will also be highly-themed restaurants and bars located throughout the park offering signature food and beverage options and impressive volcano views. Even more unique features of the park will be announced later.

International Tickets On Sale Soon: Universal Orlando will soon introduce a brand-new, 3-Park Explorer ticket for guests where they can plan to experience the highly-anticipated Volcano Bay for travel dates beginning June 1, 2017. Tickets will soon be available through international web sites and travel professionals, and additional ticket options will be announced later. 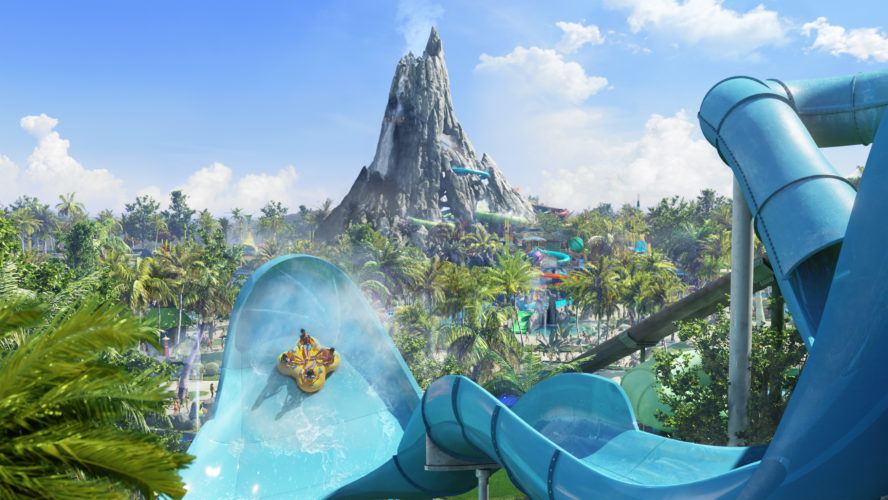 For a first look at Volcano Bay watch this video, and stay tuned here for more updates as they are released between now and next June: