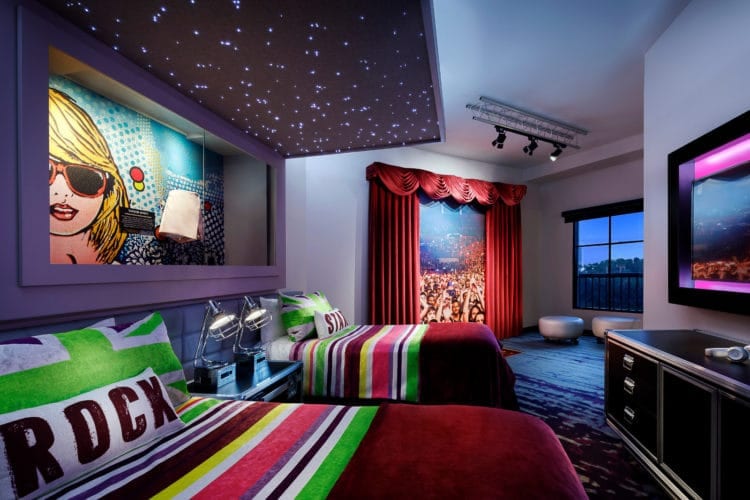 Hard Rock Hotel at Universal Orlando has recently redesigned its popular kids’ suites into new Future Rock Star Suites, where aspiring musicians get to perform under the lights on their very own stage.

Designed to capture the excitement of being on tour, Hard Rock Hotel‘s two-room Future Rock Star suites feature themed details from floor to ceiling, including a stage with liquid flooring and lights, a twinkling starlight canopy over the beds and brand new Hard Rock memorabilia from today’s superstars. 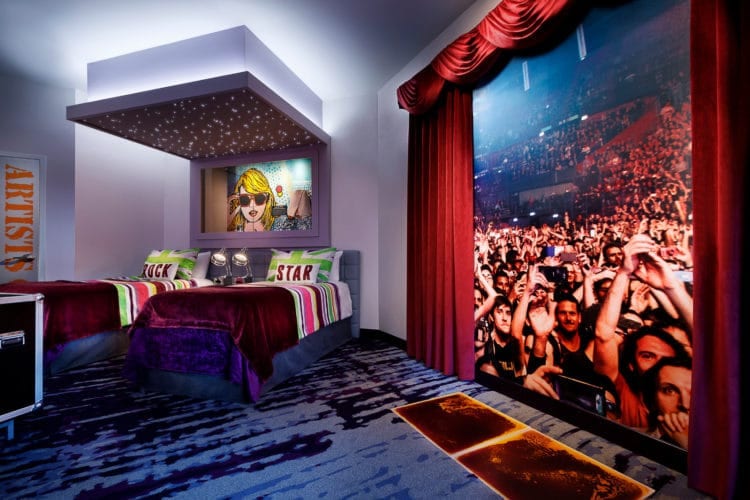 Each suite features an item once donned by a music celebrity, marking the first time memorabilia has been installed inside a guest room at Hard Rock Hotel at Universal Orlando. Every Future Rock Star Suite consists of a king room that connects through a “stage door” to a room with two twin beds and roadie case-inspired furniture.

“We designed these suites for tweens, teens and any kid who ever dreamed of performing on stage for thousands of adoring fans,” says Carlton Hudson, managing director at Hard Rock Hotel at Universal Orlando. “The suites bring that dream to life for the entire family with everything a true rock star needs to put on an unforgettable show. Plus, we brought in pieces of Hard Rock’s priceless memorabilia collection to amplify the experience of staying in these one-of-a-kind suites.” 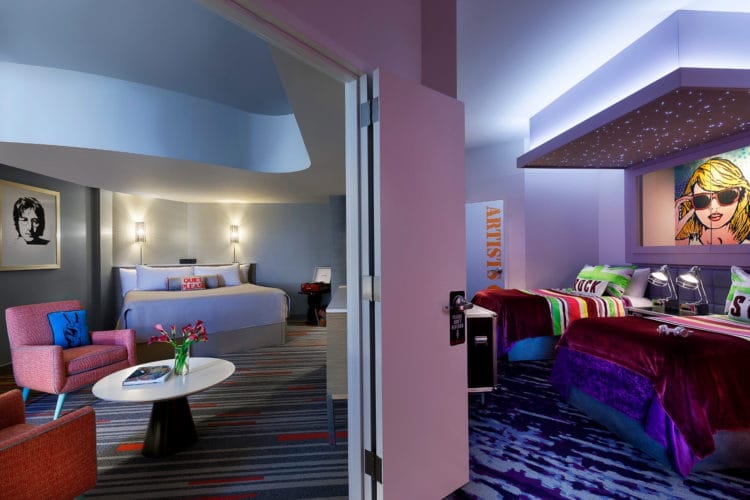 Future Rock Star Suites are 800 square feet, and can accommodate a maximum of five guests with a roll-away bed (extra $25 fee per night). Nightly rates are about $350 more than a standard room, or $780 per night plus tax for a weeknight in early March. All Hard Rock Hotel rooms include complimentary water taxi or shuttle bus service to the Universal Orlando theme parks, free Universal Express Unlimited ride access (theme park admission required) to Universal Studios Florida and Universal’s Islands of Adventure, and Early Park Admission to The Wizarding World of Harry Potter and Universal’s Volcano Bay one hour before the theme parks open.

For more information about the Hard Rock Hotel at Universal Orlando, visit universalorlando.com/hardrock and watch these videos:

Attractions – The Show – The Walking Dead...

Flying to Orlando? You may get to...