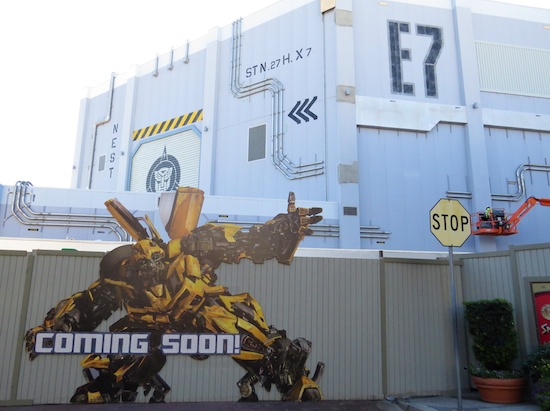 Construction continues at a fast pace for one announced and two unannounced expansion projects at Universal Studios Florida. Let’s take a look at the latest construction photos for Transformers, The Simpsons and The Wizarding World of Harry Potter.

Let’s start with the announced project, Transformers: The Ride – 3D. As you can see in the photo above, the outside of the building is just about complete. Workers were still putting some finishing touches on the building this morning. 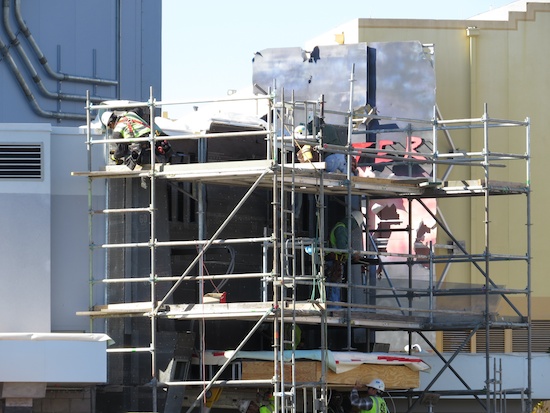 The majority of the workers outside were readying this area. Our guess is that this is where the main sign for the ride will soon be placed.

We reported that the Transformers gift shop opened last week. It continues to be open each day. Here’s a video of the inside.

Two of the Transformers characters, Bumblebee and Optimus Prime, are also meeting guests each day at the park. Here’s a video of them. Megatron is expected to join them when the ride officially opens this summer.

Moving on towards The Simpsons Ride, you can see the construction walls extend on both sides of the walkway, creating a bit on a tunnel. 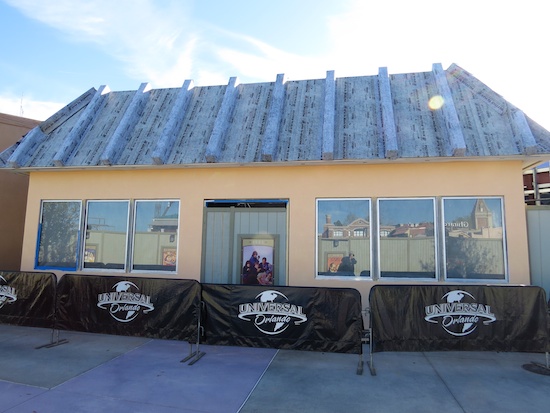 This building is looking more like Krusty Burger with the recent addition of the lines down the roof. 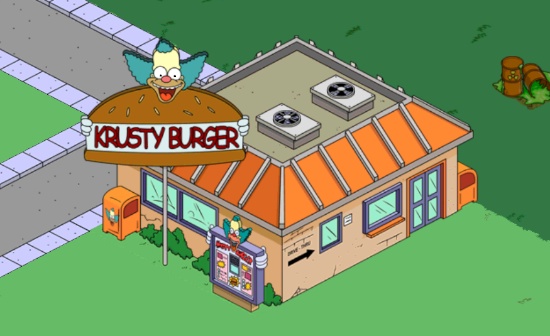 Here’s a photo of Krusty Burger from The Simpsons Tapped Out game for comparison. 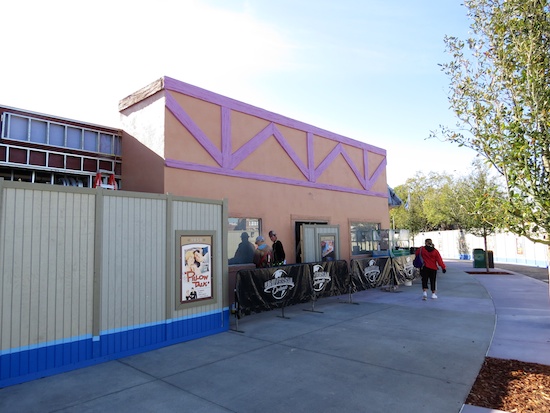 Some added paint to Moe’s Tavern make it even more unmistakable even though Universal hasn’t yet announced what is going here. 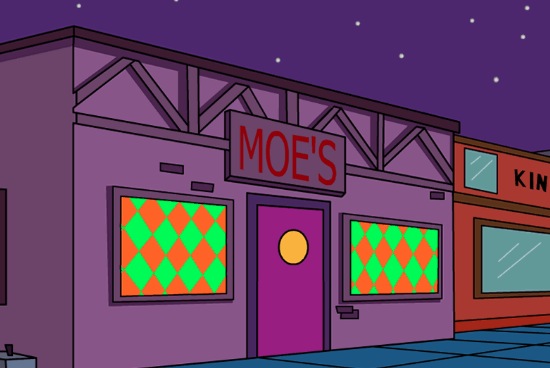 The whole area of Moe’s, Krusty Burger and more will most likely lead into a food court area when it opens. But as you can see here, there’s more construction across the walkway, waterside. This is a long area and we don’t know for sure what will be placed here, but rumors say a Duff Beer bar and some sort carnival-type ride.

Until yesterday, this waterfront area has just been dirt. But now this green and blue structure stands. It looks like some sort of overhang. Could it be for a ride loading area, or maybe a seating area, or something else? 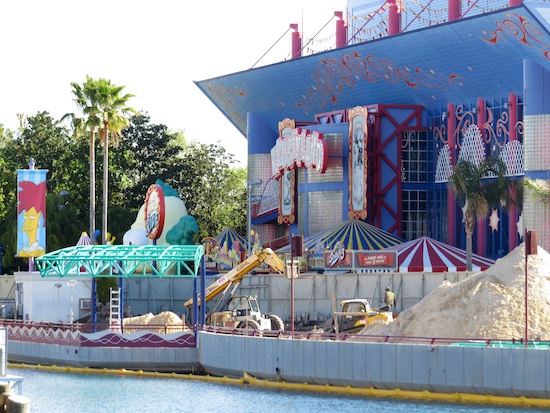 Here’s another view of the structure across from The Simpsons Ride. 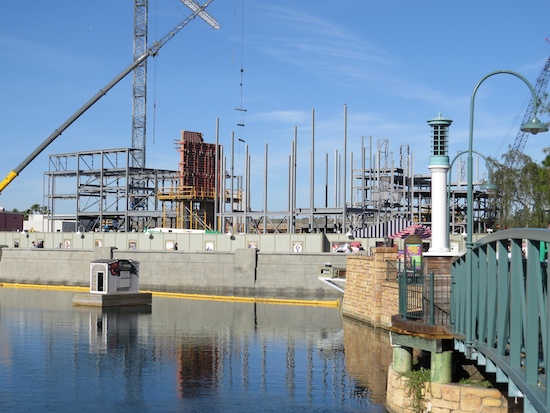 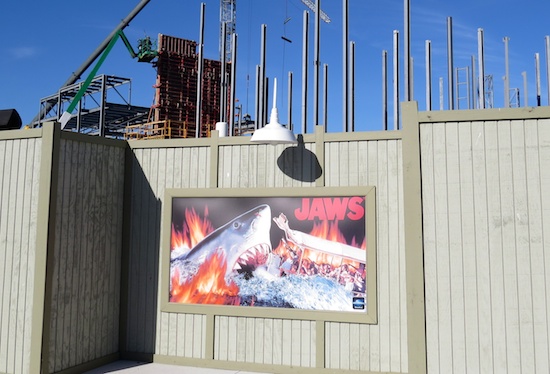 Universal has added a couple of new attraction posters to the construction wall around the Wizarding World expansion. This one must be a tease to fans of the ride that used to be here. 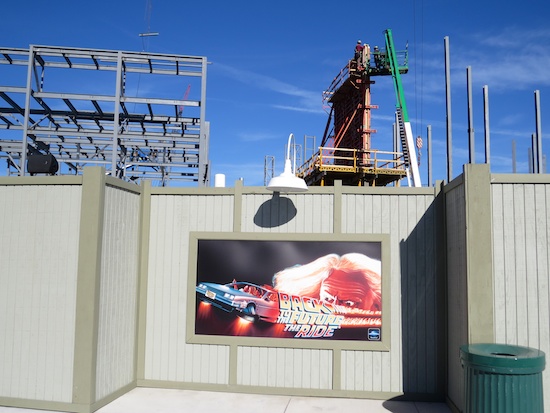 And this one highlights Back to the Future The Ride, which used to be where The Simpsons Ride is now. 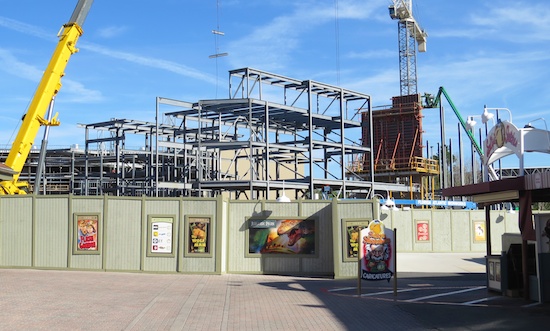 Here’s a final look back at the huge buildings being constructed in the former Amity area. Rumors say this area will feature Diagon Alley, a Gringotts Wizarding Bank indoor roller coaster, a Leaky Cauldron restaurant and more.

Stay tuned for more updates and the official announcement from Universal when they decide to make it. For more frequent updates, follow us on Twitter @Attractions.

Downtown Disney to become Disney Springs over the next three years

Can’t everything just be done already?? My anticipation will be the end of me!

I like the tridutes to the former rides, lests hope the Simpsons area will be open by this summer. I also heard romers about a krusty meet and great.

I find the Simpson’s ride to be a disappointment, and they never improved the projection dimness that hampered the picture quality despite the revamp to make it a Simpson’s ride.

This theatre is in desperate need of a full Digital makeover, projection and all…OR bring back and revamp to BTTF 2.0…Can’t say I miss JAWS being gone though….that replacement was LONG overdue….

Can’t wait for Transformers!!! Orlando should have gotten it FIRST, not last…..

Actuslly, I’ve seen close ups of those attraction posters, and if you’ll look towards the bottom-right corner, you’ll see something with the Universal logo on it. Rumor has it that it’s suppose to be for some new unannouced app, possibly an updated attraction guide/navigation app with smart screen functionalities. It would be neat if you could take a virtual tour of all the old, long gone attractions.