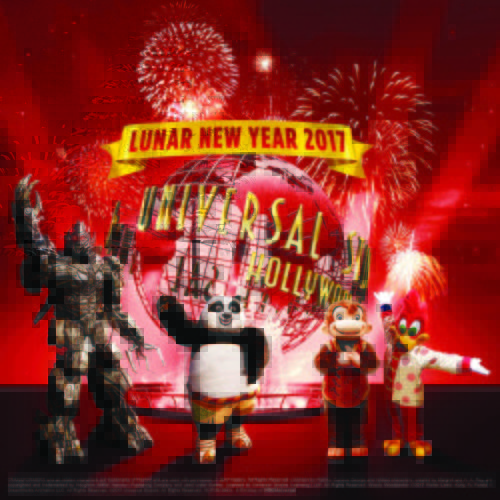 This year’s Lunar New Year mark the return of the Mandarin-speaking Megatron who will engage guests in conversation characteristic of his persona as the leader of the Decepticons. The antagonist of Universal’s Transformers 3-D attraction will joined in the park by other cartoon characters, including Kung Fu Panda‘s Po and Tigress, Curious George, and Woody Woodpecker, who will all don festive Chinese attire.

Lunar New Year comes to life within Universal Plaza, situated at the heart of the theme park where guests will be ushered into the polygon-shaped piazza, under a curtain of customary red Chinese lanterns and a plum blossom arch. Inside they will encounter a dozen lampposts, each featuring banners of the twelve zodiac animal signs along with three symbolic attributes. A selection of Asian-inspired treats will also be available, including pastries decorated with the Chinese characters for “Rooster” and “Fortune.”

As part of the celebratory Lunar New Year event, guests are also invited to toast the “Year of the Rooster” at Universal CityWalk’s newest restaurant, Dongpo Kitchen, serving upscale and modern Sichuan cuisine. Inspired by China’s premiere restaurant Meizhou Dongpo and its renowned and innovative owners, Chef Mr. Wang and his wife Mrs. Liang, Dongpo Kitchen, features the comforts of a casual dining environment with both indoor and al fresco seating and caters to an eclectic palate with a variety of signature dishes ranging from Dongpo fried noodles, roasted duck salad, spicy chicken to specialty beverage shakes such as dragon well green tea and roasted oolong milk tea.

More information is available at UniversalStudiosHollywood.com. Mandarin-speaking guests can learn more about the Lunar New Year event at ush.cn.

Watch this video of the Transformers 3-D attraction at Universal Studios Hollywood:

Out of the Loop: Hanna-Barbara characters return...