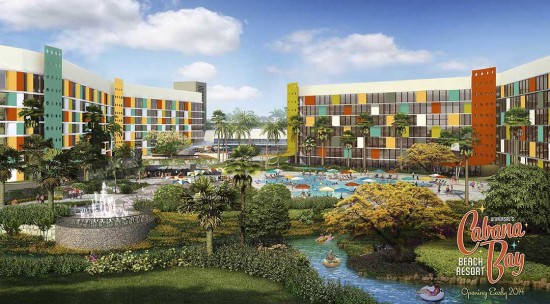 Universal Orlando Resort is now accepting reservations for their upcoming Cabana Bay Beach Resort, which is set to open on March 31, 2014. The Courtyard Family Suites will open first starting on that date, followed by the Tower Family Suites on July 1, 2014.

The hotel will also feature two zero-entry pools including a 100-foot water slide, a dive tower and even a lazy river. The two courtyards will share a two-story arrival building home to a food court serving traditional American classics along with an ever-changing selection of international cuisine, a 10-lane bowling alley, a game room and a fitness center. 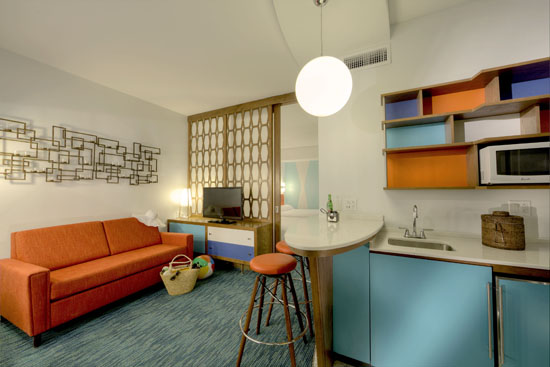 The North Courtyard will feature four-story buildings with open corridors and direct access to guest rooms. Each of the 600, 430-square-foot suites will sleep up to six and include a fold-out foam bed, kitchenette, a sliding partition for privacy, two flat-screen TVs, and an extra-large bathroom with preparation spaces for three people at once.

The South Courtyard will also be inspired by the ’50s and ’60s, but will feature a tropical resort design around an 8,000-square-foot, zero-entry pool with a sand beach and a lazy-river complex. In addition to 300 suites, the towers will feature 900 guest rooms that are each 300-square-feet and that sleep four and include two queen beds and mini-fridge.

Rates begin at $119 per night for guest rooms and $174 per night for Family Suites (guests who stay longer will save more, with discounts up to 25 percent off per night.) Package rates are available with savings based on length-of-stay; a family of four can stay for seven nights for $47 per person, per-day – including accommodations and tickets to both Universal Orlando theme parks.

Well it is chepper then the other hotels on the resort

What type of transportation will there be to get you to and from the park and resort?

Will you get the Express Pass staying at these Hotel’s?

The transportation to the Universal parks and other nearby parks is going to be shuttle service.

There will be no Express Pass (Universal Express Unlimited) to the ones who stay at The Cabana Bay Beach Resort. Add to that no water taxis to the parks and not priority seating at Universal’s restaurants.

But it will offer a lazy river!