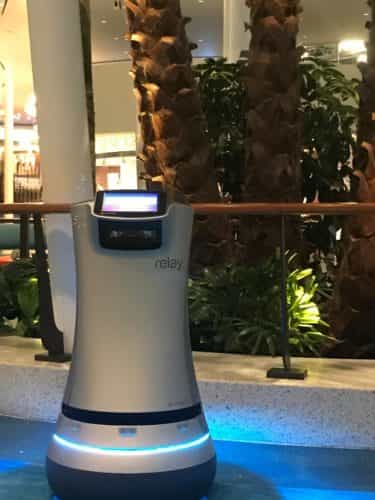 Universal Orlando’s official Twitter account posted a photo of a Relay robot on February 28, tagged with the phrase “Testing, testing… ???? #CabanaBayResort.” While there is no formal confirmation yet, it appears that Universal is experimenting with these high-tech automatons, which are designed to ferry small items — like a toothbrush or towel — to guests’ rooms.

Relay is an industrial device developed by Savioke, a robotics company led by Steve Cousins. According to an article from Digital Trends, the “three-foot-tall Relay uses Wi-Fi and on-board cameras and sensors to find its way around corners and along corridors. It also calls the elevator wirelessly and, importantly, automatically alerts the guest once it arrives outside the room.”

We’ll update you if we spot any Relay room-service robots in the wild, but rest assured that Universal Orlando’s human hotel staff will still be available to fulfil your requests.

Here’s a video tour around Universal’s Cabana Bay Beach Resort, without any ‘bots, droids, or Replicants (as far as we know).

Get a Coca-Cola delivered to you by a...

Cheerleader robots to join The SpectacuLAB at Epcot...