Veterans Museum in Kissimmee offers a look at America's brave 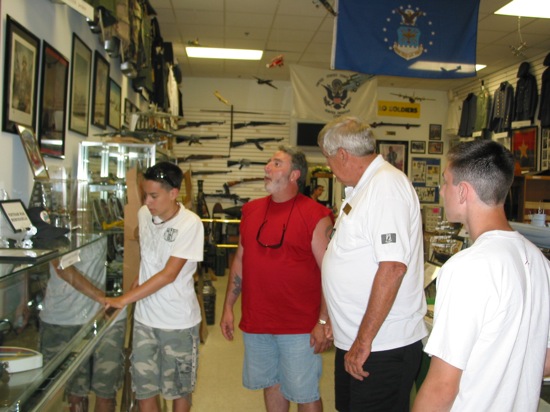 The Veterans Tribute and Museum is a little gem tucked way back in the corner of the Osceola Square Mall in Kissimmee. Inside, visitors find a treasure trove of military memorabilia items from every conflict in America’s history.

A rifle dating from the Revolutionary War is the focal point on one wall. Signatures of Medal of Honor recipients draw the eye as you come through the door. A silent memorial to Prisoners of War and those Missing in Action pays tribute to those left behind on foreign shores. A section of wall honoring the Buffalo Soldiers and their service to their country dominates anther section of wall.

Yes, there is something for everyone, but the true diamonds are those who man the museum day after day. Not for money or gain, but because they know that if we forget the past, the future will surely repeat the same kind of conflicts. The men and women who served this great nation man the museum faithfully day after day. They do it to remind the average citizen that freedom isn’t free and comes with an expensive price tag.

History lives here in the stories of those who participated in campaigns and wars all over the globe. They will willingly share most of those memories with interested visitors, only holding back those that are too painful to be pulled from the shadows of the heart that remind them of missing comrades and searing pain too awful to remember.

Fourth of July Celebrations are only days away. Reward yourself and your family with a trip to the museum and find out what that national holiday really cost. Talk with those who know that freedom has a taste the average citizen will never know. Share with them the stories of what war is really like. Listen and learn. You won’t be disappointed.

The museum is open daily from noon to 6 p.m. Admission is free.

Writer Janie Blaney spent more than 20 years in the Air Force as a journalist for various base newspapers, and five as senior writer for a Command Magazine and has traveled extensively to cover subjects such as Rwanda, Sarajevo, Panama, Honduras and of course, Desert Shield/Storm.

We visited your exhibition a year or so ago while visiting from the UK. I was chatting to the gentleman who was ‘manning the store’ and he told me that he had served in England during WW2 at a bomber base call Poddington. I had not heard of it ( to my shame), but I have since found out that it still exists as the Santa Pod drag racing strip. I have been trying to find your email address for some months and have now found it. If possible please tell the gentleman concerned that my visit to your show made quite an impact on me, and that I am glad to have met him, and found out about Poddington.
With kind regards
Paul