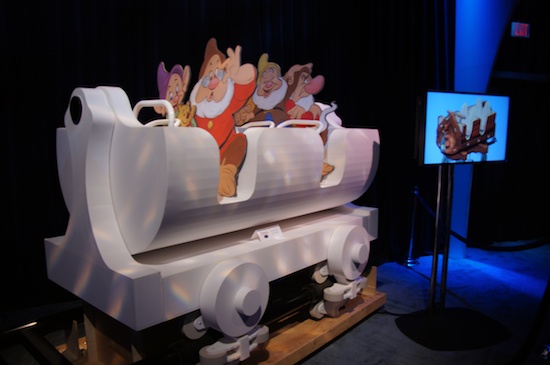 We were invited to a special preview of the Parks and Resorts pavilion, dubbed Carousel of Projects, last night at Disney’s D23 Expo 2011 in Anaheim, Calif.

Among a room full of plans and prototypes for Disney’s parks and resorts around the world, were two specifically for Walt Disney World: a large table-top model of the Fantasyland Expansion (more on that later) and a full size mock-up of the innovative ride vehicle for the Seven Dwarfs Mine Train Ride.

The Seven Dwarfs Mine Train will take guests on a musical ride into their mine. The coaster will feature a first-of-its kind ride system with a train of ride vehicles that swing back and forth as they move along the track. The ride will be accompanied by animated figures of Snow White and the Dwarfs.

Playing on a screen next to the model was the below video showing the design and testing phase for the new ride. Of particular note are the Imagineers testing the vehicle out on the back of a pick-up truck outside of their offices in California.

No opening date has been set for the ride but the new areas of Fantasyland will open in stages beginning with the dueling Dumbo ride in fall 2012.

Howl-O-Scream “The Dark Side of the Gardens” Details Revealed