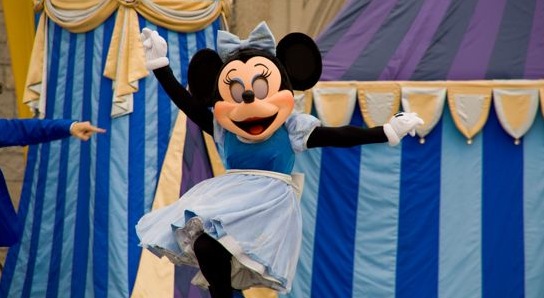 A few years ago some new technology was added to the characters in the Dream Along with Mickey stage show at the Magic Kingdom that allowed the characters mouths to move and eyes to blink. Well it looks like Disney has improved on that technology by enhancing a Mickey meet and greet by allowing him to actually talk to guests.

Below is a video uploaded to YouTube by lrharrisjr on May 3 that shows Mickey Mouse not only meeting and greeting guests at Disneyland, but also talking to them and calling them by name. There’s no word yet if this character interaction was marked as being a test of the new process, but I assume it was. Let’s hope it works out well so we can start meeting all of the characters in a whole new way here in Orlando as well.

Editor’s Note: The user who posted the video told us they were at the park as regular guests, but had to sign something before entering the room that said they would be video taped by Disney for internal research.

In the first video Mickey greets all the guests in the room as a group. You’ll hear him address them by name in the second video.

Meh…. A little than impressed, quite honestly.

That is good. I thought it was pre-recorded until Mickey said the names of people when they gave their names. That is something you can’t do pre-recorded. The voice sounded like the current voice of Mickey. So I wonder if Disney flew that voice actor to do this?

I think it was more personable when mickey acturally talkes to the guests and call them by their name.