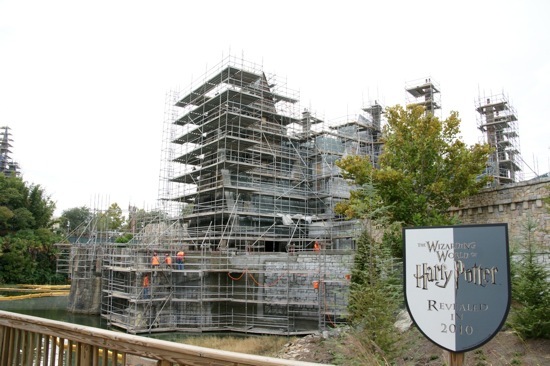 It’s been almost a month since our last update on the ongoing construction of the Wizarding World of Harry Potter in the Islands of Adventure theme park at Universal Orlando Resort.

Since then, it’s been all about the details as scaffolding has popped up surrounding nearly every square inch of Hogwarts Castle and the buildings that comprise Hogsmeade Village. It was tough to pick out any specific details through the scaffolding, but here’s what our cameras captured.

First up, take a video walk through the park that includes rock-work and detailing around Hogwarts Castle, the show building for the upcoming Harry Potter and the Forbidden Journey attraction, additional details added to Hogsmeade Village buildings, and a glimpse at the Hogwarts Express train: 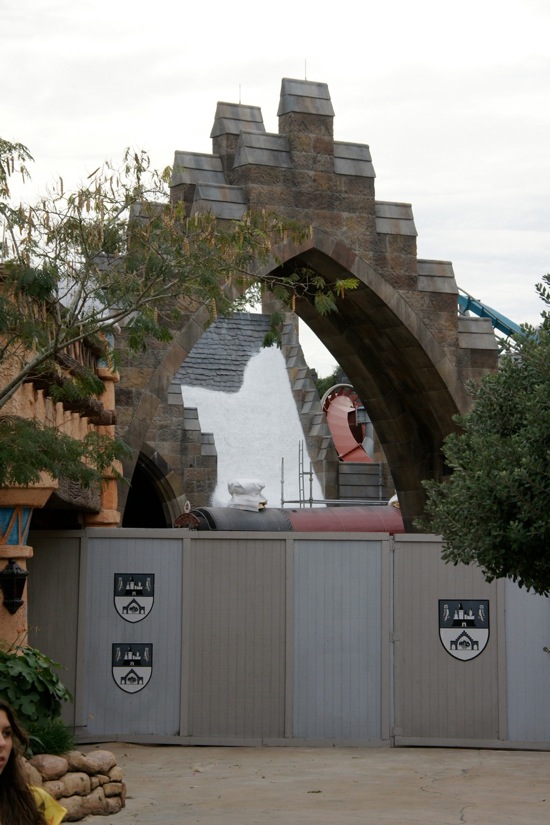 The entrance area to Hogsmeade Village now features snow-covered roof tops and a full-size Hogwarts Express train (though the train isn’t quite finished yet). 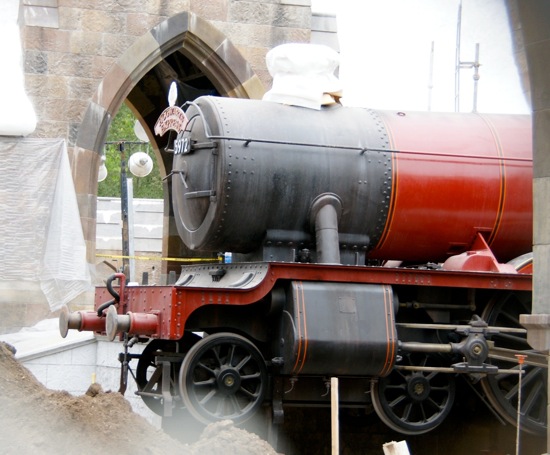 Here’s a closer look at the Hogwarts Express train. 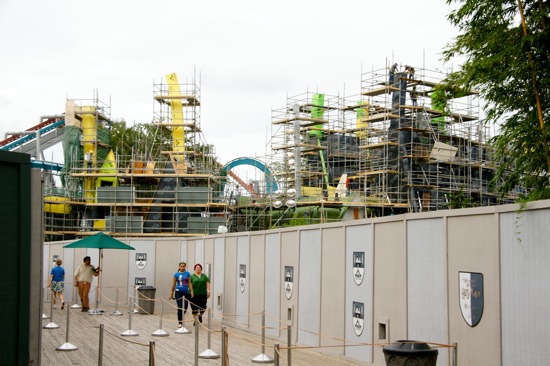 This temporary path leading to Dueling Dragons shows the backside of Hogsmeade Village, still very much under construction. The Fire and Ice coasters that make up Dueling Dragons will ultimately be rethemed to be part of Dragon Challenge. 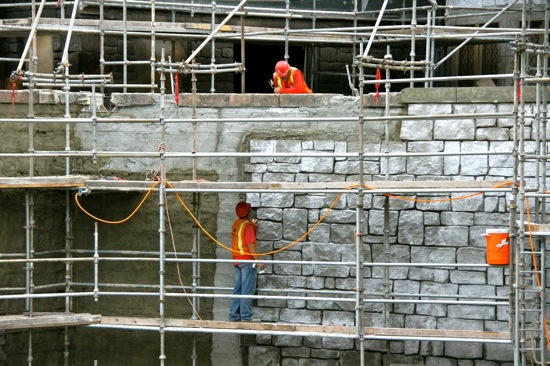 Workers have begun adding stone details over the water behind the Three Broomsticks side of Hogsmeade Village (also seen in the photo at the top of this post). 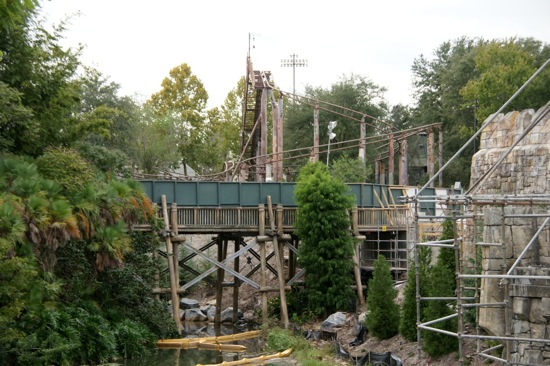 Formerly the Flying Unicorn, the Flight of the Hippogriff roller coaster has yet to see much progress. 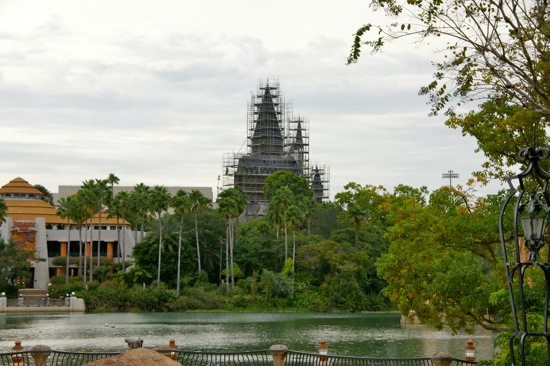 Hogwarts Castle towers high above any other point in Islands of Adventure. It can be seen from many areas throughout the park and even from the nearby major highway, I-4. 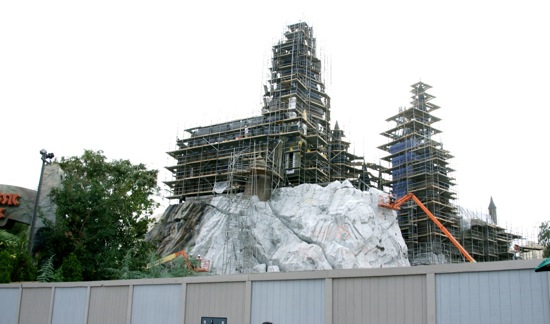 One of the biggest changes since our last update is the addition of the rock-work surrounding the base of Hogwarts Castle. 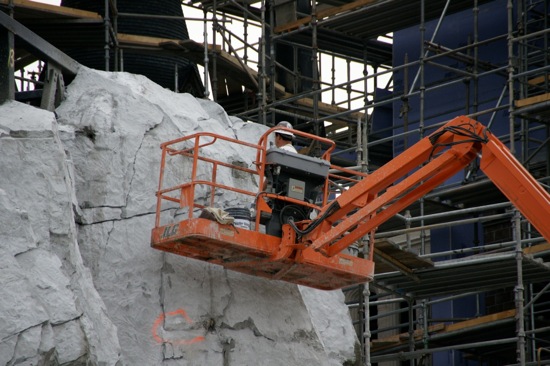 Here’s a closer look at the rock-work still in progress. 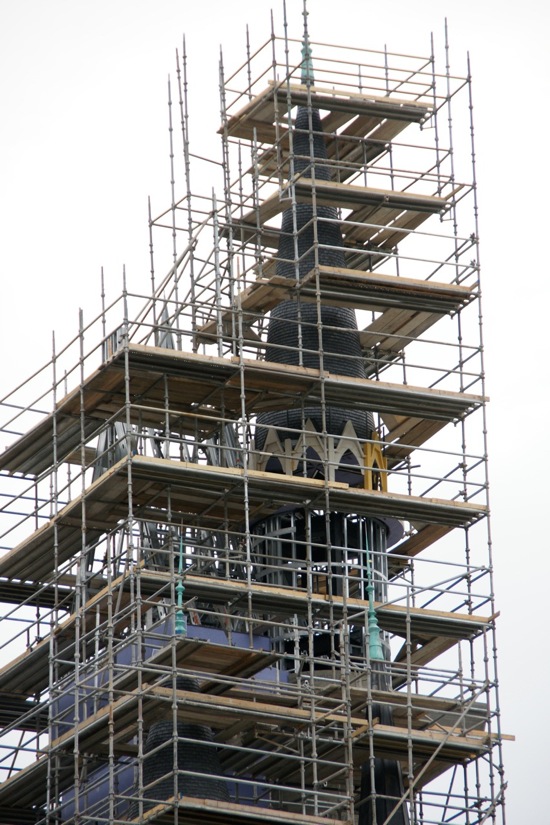 Details are now being added to the walls and turrets of Hogwarts Castle. 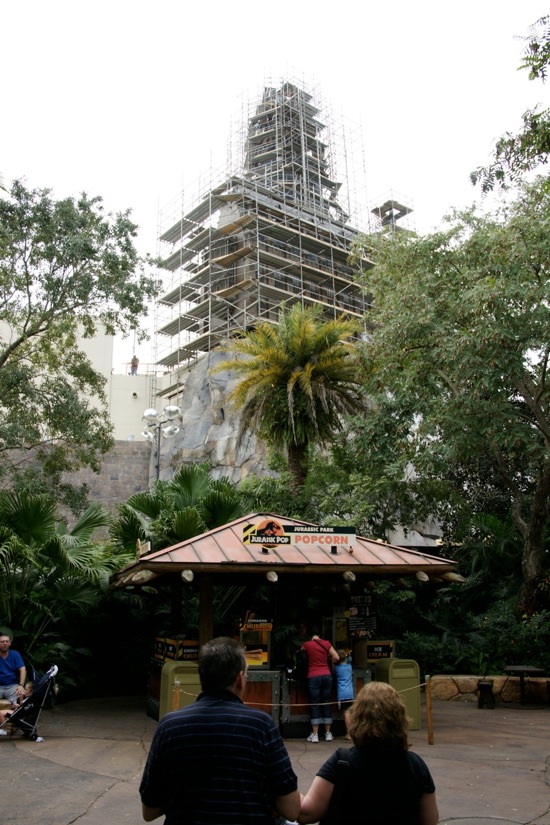 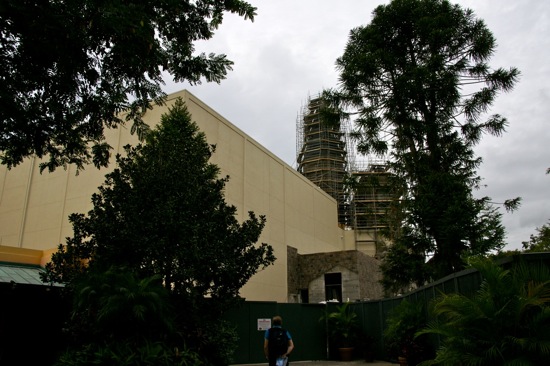 The large show beige building behind Hogwarts Castle hides what’s to come for the Harry Potter and the Forbidden Journey attraction. 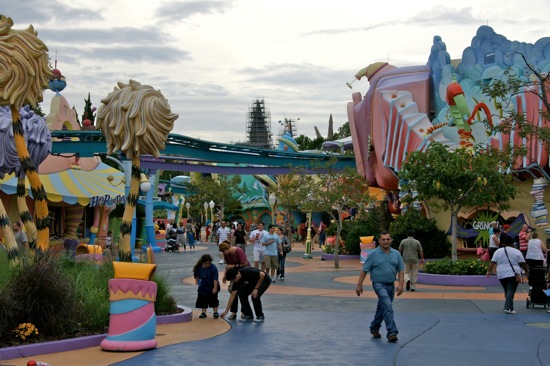 The view down Seuss Landing now includes the peak of Hogwarts Castle.

Finally, here’s a panoramic image snapped from a pathway behind Popeye and Bluto’s Bilge Rat Barges. Click the image below to open the full-size version in a new window.

We’ll be back again in a couple weeks with another Wizarding World of Harry Potter update as well as a preview of the “theme park within a theme park” in our coming Winter 2010 issue, due out in December.

Photos and video from Fantasy of Flight's Roar n' Soar

i cant wait for the openning day.. when is the exact date?? please reply..

It hasn’t been announced yet. They just said Spring 2010.

Is it me, or is Hogwarts looking pretty small in the video?

Hogwarts is certainly not full-scale but it is a massive structure. It towers over everything else in Islands of Adventure and appears to use forced perspective to make it look bigger than it actually is. Once the details are all added, it seems like it will look just like it does in the films.

It looks beautiful!!! I can’t wait to go! Will so be there this summer!

I think it looks great…once the scaffolds are gone, it will look enormous.

It seems like they’ve perfected the forced perspective illusion.

I am a huge Harry Potter fan and can not wait to go see the attraction. It looks huge and seems like you can see it from all over the park. Just beautiful!! 🙂

Joe Jonas, Expedia team up to give...