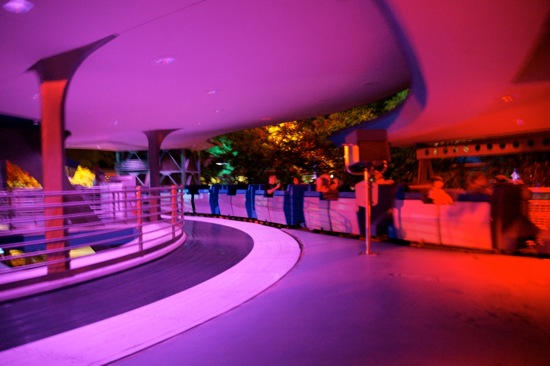 The Tomorrowland Transit Authority (TTA) recently received an update at the Magic Kingdom in Walt Disney World. It closed for refurbishment at the same time as Space Mountain back in April 2009. While the Space Mountain improvement is still in-progress, the TTA reopened within the last few weeks with added colorful, nighttime lighting (seen above). Shortly thereafter, the ride’s narration was completely changed to mixed fan reviews.

Here’s a video shot on the night of Oct. 14, 2009 of the entire Tomorrowland Transit Authority ride. It features specially-recorded binaural audio so watching while wearing headphones is recommended.

Many fans have praised the use of the phrase “people mover” in the new narration, a throwback to the attraction’s former name, the WEDWay PeopleMover. Others have expressed disappointment in the new narration’s removal of popular lines including, “Paging Mr.Morrow, Mr. Tom Morrow. Your party from Saturn has arrived. Please give them a ring” and “Mr. Johnson in Skyview Hovercraft 1.”

Personally, I think the new narration fits the ride well, allowing more time to relax in near-silence while traveling the track. I’ve always thought of the Tomorrowland Transit Authority as the perfect ride to get off of your feet after pounding the pavement around the park all day. The old narration, while entertaining, was loud and often in-your-face. The new one is considerably quieter, played at a volume where you can easily choose to listen if you want or just ignore it and enjoy the wind in your face as you whisk around Tomorrowland.

The Sum of All Thrills design-your-own-ride opens in Innoventions at Epcot – Video, Photos

Wow Ricky, that was a great video! I’ve been keeping it “unread” in my newsreader so that I could watch it at a time when I could sit-back and enjoy it. I finally remembered it tonight!

I absolutely love Tomorrowland at night. It’s one of the most atmospheric lands in all of the parks at night IMO. I really like the new lighting on the TTA/PM as it helps lend to that fantasy, futuristic feel.

The spiel is better than I thought from the low-quality daytime TTA video I watched a few days ago. I agree that the quiet time is nice — now if they’d only figure-out a way to smooth the gap noise as the wheels roll between the track sections 😉

Anyway, thanks for the great quality video and especially for taking it at night. That’s a nice camera to stay focused that well in the dark/light transitions.

I’m glad you enjoyed the video. Tomorrowland is always the most enjoyable at night at the new lighting on the TTA is really wonderful in person.

And I’m happy that I remembered to turn the camera on manual focus for once! 🙂

The changes in the new TTA ride look great but without the original narration it’s really not the same. I am not opposed to it but was it really necessary to remove the narration…

If feel the same way about Spaceship earth. i hope this is temporary until Space Mountain opens again..

Great video. The speil over isnt actually as bad as I thought compared to the other videos I watched, but I still do not like this one and I would like them to bring the old one back! Including all phrases.

They also really need to add music to the tunnel in Space Mountain and possibly the ‘Great Big Beautiful Tomorrow’ song when going past the Carousel of Progress.