Video: The Muppets receive a star on the Hollywood Walk of Fame 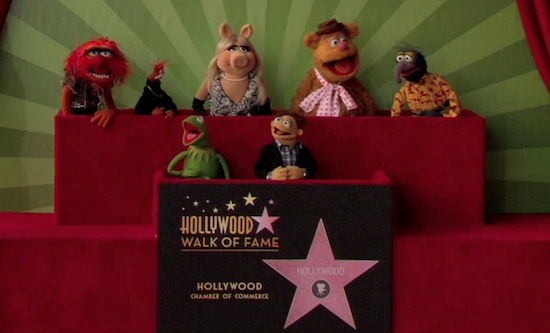 Earlier today, Kermit the Frog, Miss Piggy, Fozzie, Gonzo, Animal, Pepe, Sweetums and Walter gathered in front of the El Capitan Theatre in Hollywood, Calif. to receive their star on the Hollywood Walk of Fame. Also on hand were two of Jim Henson’s children, Brian and Lisa Henson, and Rich Ross, chairman of The Walt Disney Studios.

Besides the honor by the Hollywood Chamber of Commerce, Disney and the Muppets were celebrating the release of Disney’s “The Muppets” on Blu-ray Combo Pack and DVD. The celebration was emceed by Chamber President and CEO Leron Gubler. The Muppets’ star is the 2,466th star on the Hollywood Walk of Fame and is located in front of the historic El Capitan Theatre.

Demolition at Epcot: Years of magic in...