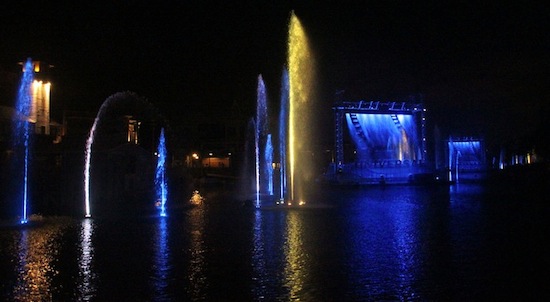 Last night, the first public preview of Universal’s Cinematic Spectacular: 100 Years of Movie Memories took place at Universal Studios at Universal Orlando. The show officially opens on May 8, 2012. Scroll down for video of the show.

The new nighttime show in the Universal Studios lagoon, highlights 100 years of the most fun, dramatic and awe-inspiring moments in film. The show is narrated by award-winning actor Morgan Freeman. Movies that are featured in the show include Back to the Future, E.T: The Extraterrestrial, and many tens of other classic Universal films. It brings together cutting-edge waterfall screens within the Universal Studios lagoon and surrounded by colorful fountains, state of the art lighting and pyrotechnics. 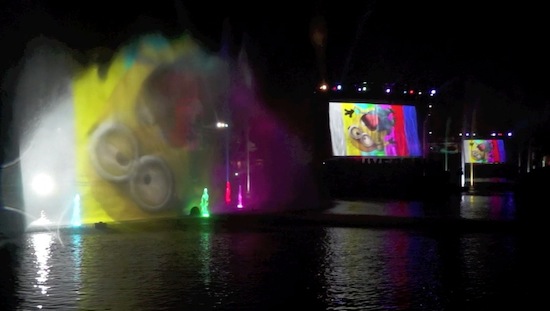 Here’s our multi-camera video of the full show at the first technical rehearsal. Remember things may change from now until the official opening:

While previews have begun, the show will only run on select unannounced nights until the official grand opening on May 8, 2012. The show will then run all summer and then on select nights through the end of the year. The new day-time parade, Universal’s Superstar Parade will also debut on May 8, 2012.

Here’s a photo gallery of the show. Photos provided by Robert Ashburn of FloridaThrills.Net.

Here’s a highlight video of the new show with an emphasis on the horror portion of the show. The music in this video is our own and not that heard during the show. Video by Don Gworek:

Thanks for update!
I had low expectations for this show but it´s even worse. All aspects of the show are unrelated and a waist of tallent. The clips, fountain, firework and projections are distracting and boring. I had a hard time to watch the video to the end.
I love Universal but this is a nighttime show I won´t wait for to see.

OT – you are nuts. I saw this in person yesterday. Beautiful ! the fountains, projection, lights and fireworks compliment the main video. Which is projected on sheets of water dropping.

The video clips from Universal films was moving – you can’t judge this show from video clips. Compared to the Epcot show, this blows it away. Epcot earth video is so far away and disconnected. Flame is lame. World of Color is a better show than Uni’s but I don’t think the budget’s compare. And much better than the sphere show uni had prior.
I enjoy very much.

I went it was funney spokey and evry thing betwwen great job univarsal.