Walt Disney World offers many ways to celebrate the 2011 holidays 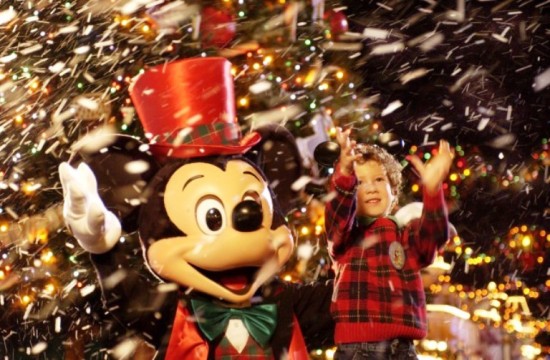 Walt Disney World will soon be adorned in holiday décor. Each theme park and resort will have a holiday glow. Here is a list of what to expect from Disney’s holiday events. 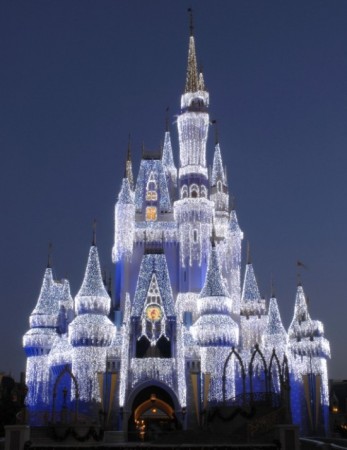 The “Mickey’s Once Upon a Christmastime Parade” will star Santa Claus, gingerbread men, marching soldiers, and Duffy the Disney Bear.

Decorated with over with 200,000 ice cycle-white lights, Cinderella’s Castle becomes the back drop for “Holiday Wishes: Celebrate the Spirit of the Season”. This special holiday fireworks show is set to popular holiday tunes.

Around the park meet and greet Disney characters dressed in holiday attire or enjoy popular attractions.

Beginning Nov. 4 and continuing through Jan. 3, 2012, Cinderella along with a cast of Disney characters will be decked out in festive holiday garb and take center stage to transform Cinderella Castle into an ice palace draped with 200,000 ice cycle-white lights.

The Magic, The Memories and You!

The nightly light show on Cinderella Castle will contain a special segment with colorful bows and boughs, gift paper and ribbons, ornaments, candy stripes and multi-colored strands of lights and gingerbread.

The retelling of the Christmas story is accompanied by a mass choir, a 50-piece live orchestra, and a celebrity narrator. Show times are at 5, 6:45 and 8:15 p.m. each evening Nov. 25 to Dec. 30 at the American Gardens Theatre. 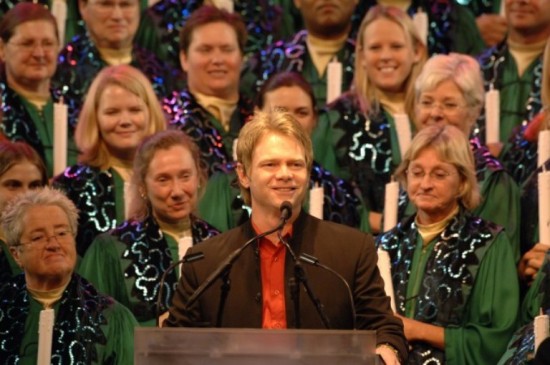 Candlelight Dinner packages are available at select Epcot restaurants. They include a special fireworks viewing area and guaranteed seating for Candlelight Processional. For bookings call 407-WDW-DINE.

Holidays around the World

Discover how different countries celebrate the holidays throughout World Showcase. International storytellers share traditions and tales from their homeland during the “Holidays around the World” celebration. The good-hearted witch La Befana, known in Italy for filling children’s shoes with treats, or the jolly gift-bearer Father Christmas in the United Kingdom will each make nightly appearances. Santa and Mrs. Claus will be in the American Adventure. The celebrations of Kwanzaa and Hanukkah are celebrated as well inside the World Showcase.

“IllumiNations: Reflections of Earth,” the finale show along the World Showcase lagoon will feature fireworks, laser lights and water choreographed to a musical soundtrack with a holiday ending. 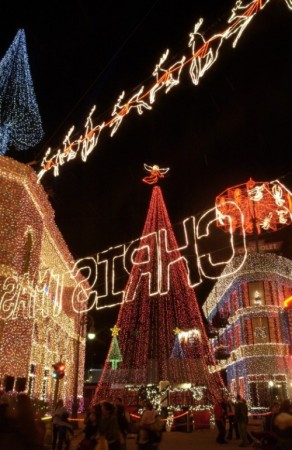 The tradition began in 1986 in Arkansas, at the home of businessman Jennings Osborne, who strung 1,000 lights as a Christmas gift to his daughter. The exhibit grew larger and brighter each year and was transported to Disney in 1995. The tradition continues after Jennings’ death on July 27, 2011.

Millions of lights along the Hollywood Studios backlot transform the area into a festive wonderland. The dancing lights and animated displays over the buildings are synchronized to holiday tunes. Catch the dancing light show along with special 3D effects Nov. 10 to Jan. 7, 2012. (The lights will not be operational Dec. 8.)

In addition to the holiday décor around Downtown Disney, guests can also pose for a picture with Santa Claus from Nov. 19 until Dec. 24. School choirs and bands will be performing during the season on the dock stage.

Each Disney hotel will be dressed up for the holidays. A life-size gingerbread house is baked with 1,050 pounds of honey, 600 pounds of powdered sugar, 35 pounds of spices and more. It even has a chimney that puffs out delicious cinnamon smoke at Disney’s Grand Floridian Resort and Spa. 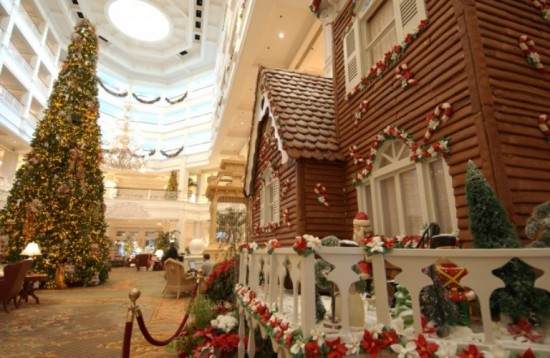 i love these beautiful features. they are interesting to look at

Were can we go 24 november? i want to spend Christmas thereThank you

Celebrate the holidays at Icon Park with...

Goblins & Giggles Weekends kick off the...