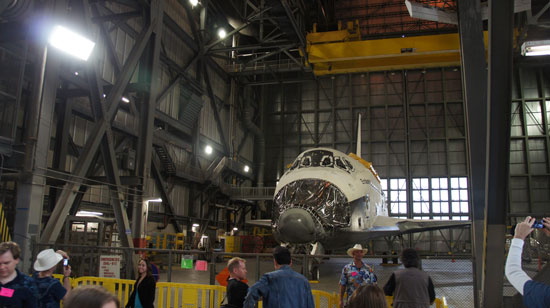 The Kennedy Space Center Visitor Complex introduced a new stop in their Up-Close Tour this week. The new stop is the VAB, or Vehicle Assembly Building, where components of the Space Shuttle were joined together in preparation for launch.

More photos from the new VAB tour stop in a moment … 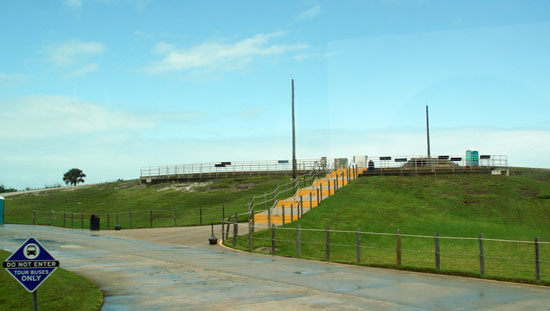 The Up-Close Tour makes a few non-standard tour stops, including this overlook that is half-way between the two former Shuttle launch pads. 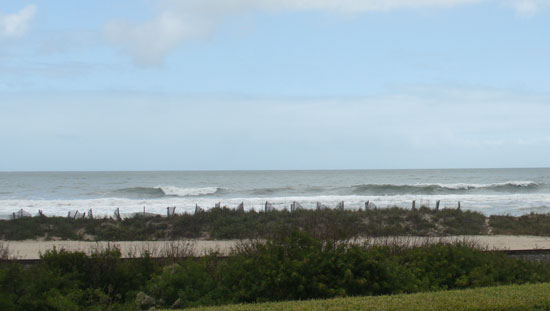 The overlook is very close to a restricted access section of the Canaveral shore, looking out into the Atlantic Ocean. 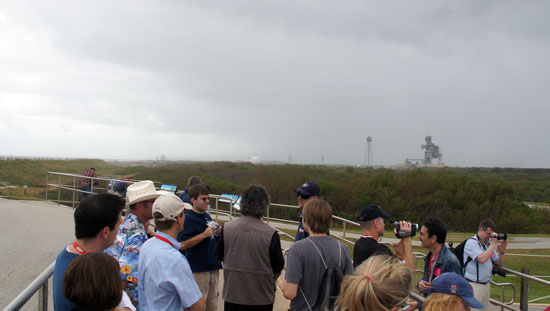 The overlook is approximately one mile from pad 39A, seen here. 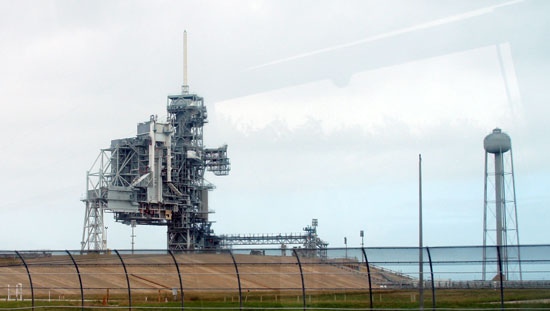 The bus drives past one or both of the launch pads, depending on operations going on that day. This is pad 39A, where the first and last Space Shuttles launched. It is also the pad where Apollo 11 launched to the moon. Notice how pad 39A has the very familiar shuttle launch structures. 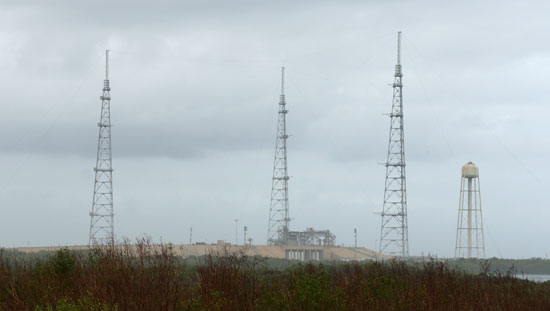 Pad 39B used to look the same as Pad 39A. But it’s now completely cleared of launch structures, fully transforming it into a launch pad capable of many types of present and future rockets. 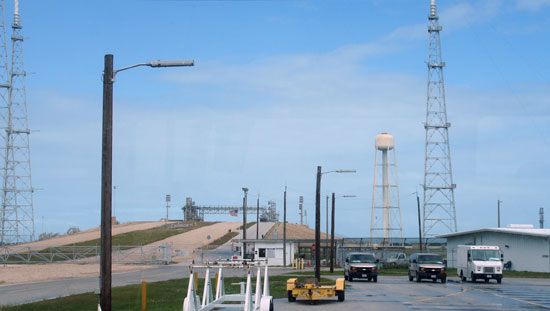 Another view of 39B as it looks today. 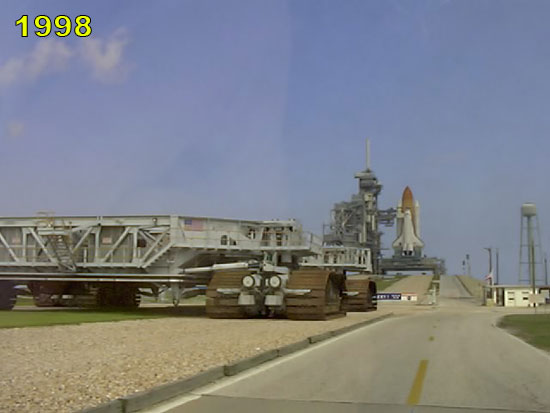 This is a similar view of pad 39B in 1998. A crawler-transporter is in the foreground. Crawler-transporters carried the shuttles between the VAB and the launch pads. Discovery is on the pad. 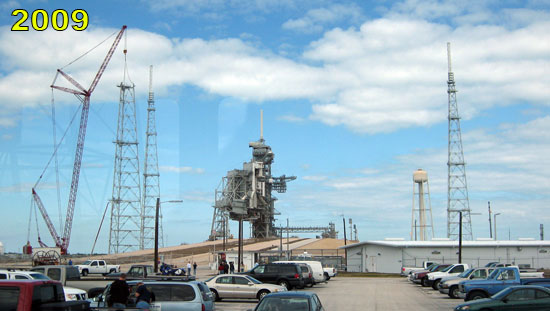 Work on transforming pad 39B began in early 2009. It was officially retired from further shuttle launches and three protective lightning towers were added. 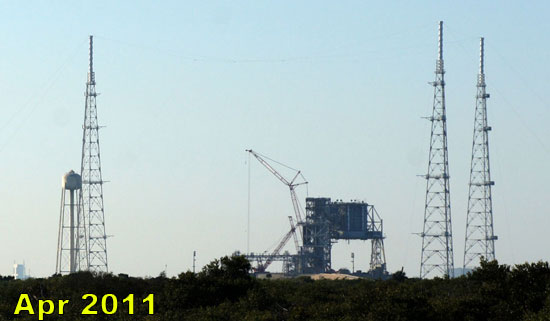 Dismantling of the launch structures was well underway in February of this year. 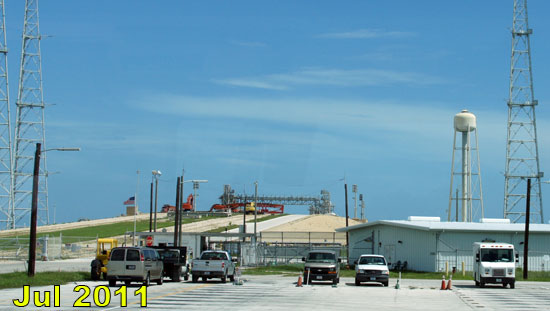 In July, the project was nearly complete. Only the fuel supply lines remained. This is actually close to how pad 39B looked for the Apollo program. The entire launch structure back then was on the mobile platform carried by a crawler-transporter between the VAB and the pad. 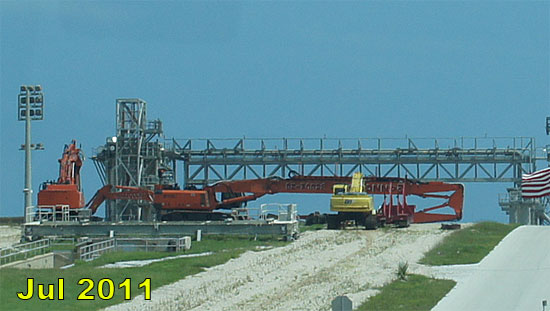 Close up of the equipment used to dismantle the pad. 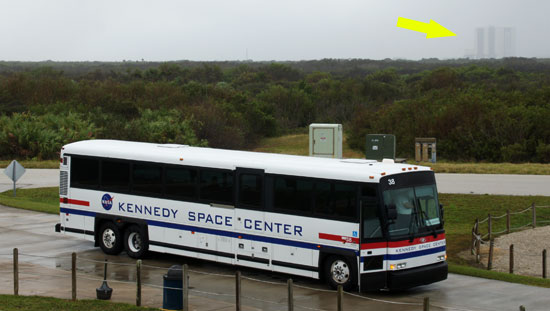 The arrow points to the highlight of the Up-Close Tour, the VAB. 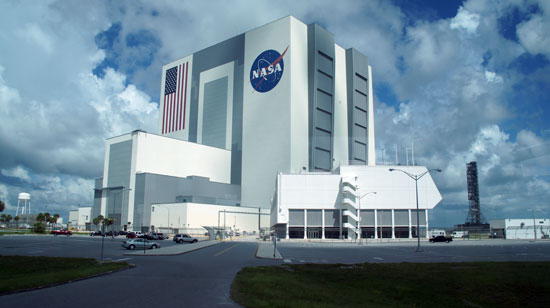 The VAB was once the biggest building in the world. Biggest by volume, at 130 million cu. ft. A Boeing aircraft plant is currently the biggest, with 472 million cu. ft. For scale, one of the Space Center tour buses is as wide as one of the stripes in the American flag. The VAB is 526 ft tall. For comparison, the Washington Monument (the tallest stone structure in the world) is 555 feet tall. 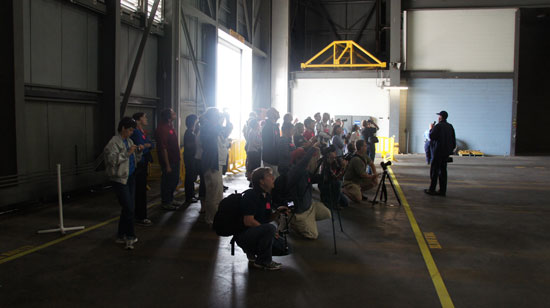 The tour group has just entered the north end of the VAB. 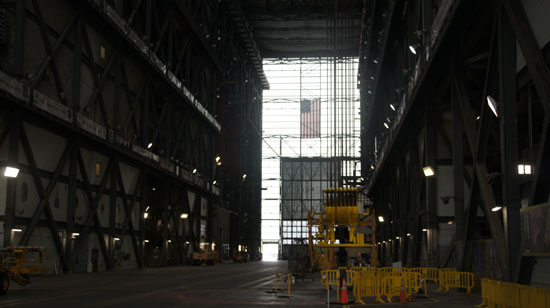 The Up-Close Tour takes you into the transfer aisle. It is the center corridor in which components of the shuttle entered and were hoisted to be joined in either of the bays on the east side of the building. The orbiter entered the transfer aisle from this doorway. The external tank and solid rocket booster sections entered at the opposite end. Note the differences in how sunlight enters through different materials. 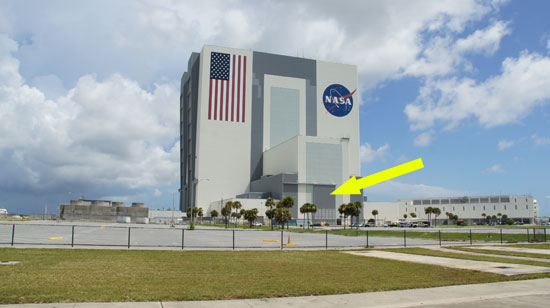 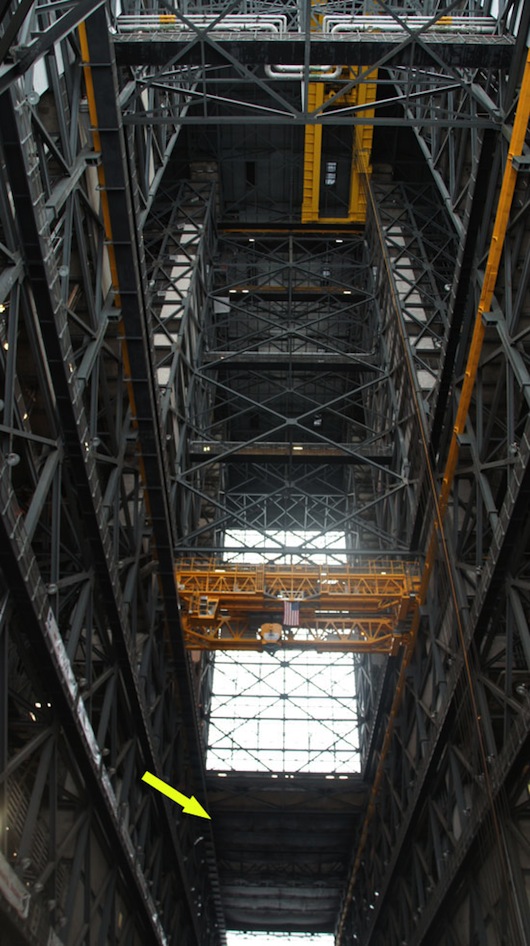 This is the full height of the VAB. The arrow points to the roof of extension from the main building. 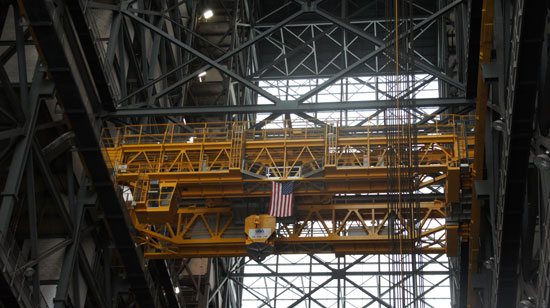 Close up of one of the gantries. 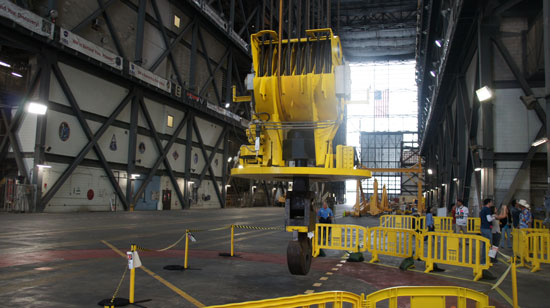 This was used to hoist components of the shuttle up. 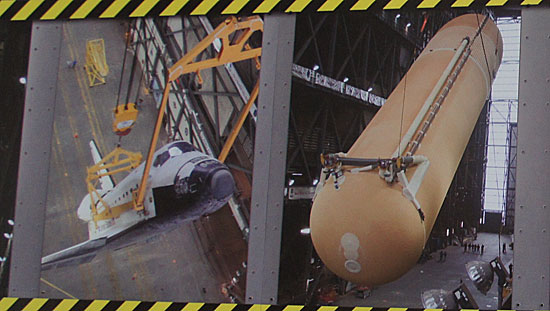 An orbiter and a tank being hoisted up. 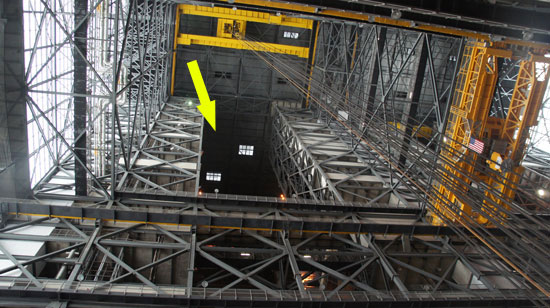 An arrow points to a gap in the upper levels, where shuttle components would be transferred over and down into a bay. 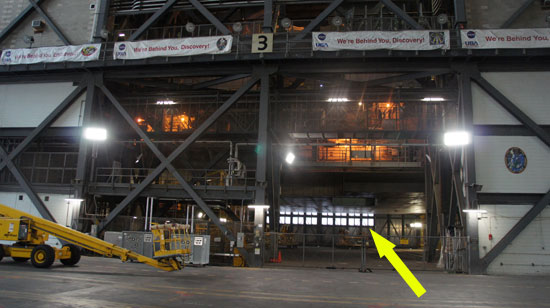 An arrow points to where a crawler-transporter would bring in a launch platform, for the shuttle components to be assembled on. 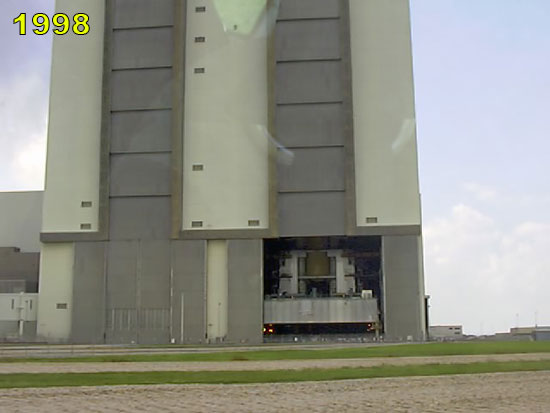 This 1998 photo shows the lower portion of Endeavour as it is being assembled, in this same bay. 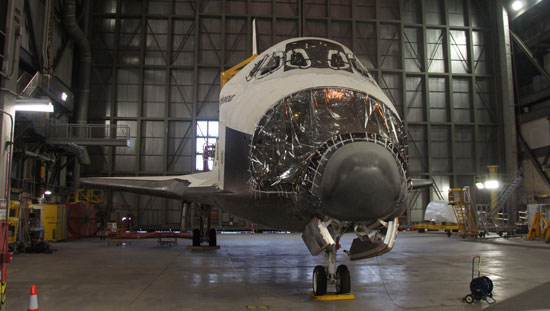 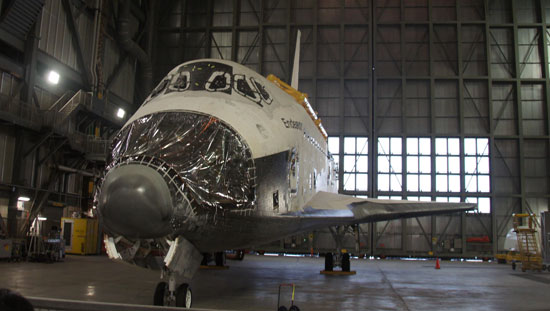 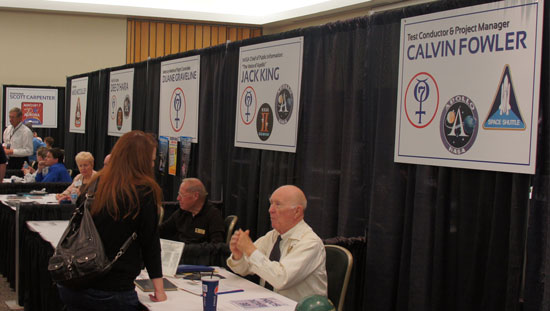 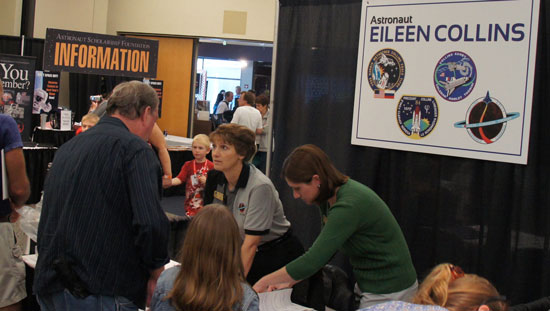 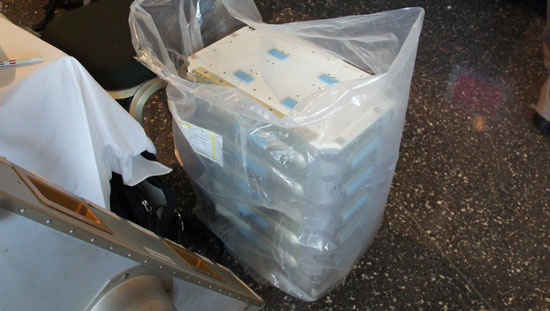 Among the collectibles available for purchase were actual experiment and equipment units from the SpaceHab module that flew on the shuttle prior to construction of the International Space Station.

Walt Disney World offers many ways to celebrate the 2011 holidays

Everything is Christmas! – The Attractions Podcast