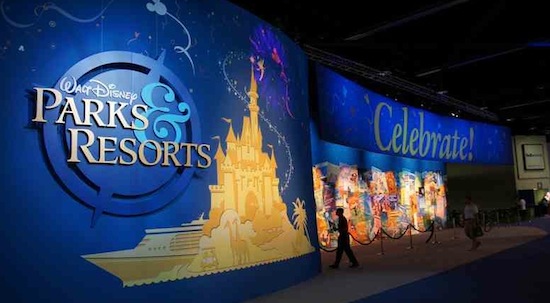 Disney’s D23 Expo starts this Friday in Anaheim, Calif. And on Friday evening, they will hold their Parks and Resorts Presentation. At the first Expo in 2009, this is where the Fantasyland expansion and new Star Tours was announced. Both of those projects had been rumors for a long time. So let’s take a look at some recent rumors and wonder which, if any will be announced Friday.

Sometimes we hear rumors then they just go away. But sometimes we hear the same rumor over and over. That usually means it’s something Disney has actually been discussing, or something the fans really want to happen. But even though Disney may be planning something, that doesn’t mean it will actually happen. Sometimes even things that are publicly announced never happen. With that in mind, here are the top Walt Disney World rumors going into the D23 Expo.

Adventures Club is coming back?
Ever since Disney announced they were closing the clubs in Pleasure Island at Downtown Disney, many fans have been upset. Sure they liked most of the clubs but it was the Adventures Club they were most upset about. In our very first episode of Orlando Attractions Magazine – The Show last year, we reported that a Disney cruise director told us the club would be returning. Is it actually coming back or is it just wishful thinking? Could this be a part of the plans for Pleasure Island now that Disney is rethinking their announced Hyperion Wharf plans?

Animal Kingdom is expanding?
It’s not a rumor that Disney originally had plans for another area at Animal Kingdom based on mythical creatures. Have you noticed the dragon on the benches and signs around the park? We have the yeti, but could a whole land of creatures be coming?
Another rumor for Animal Kingdom is a new land based on Australia, with kangaroos and other down under animals and attractions.

New country coming to Epcot?
Earlier this year a column in a Brazilian newspaper indicated that the country would be the next to be represented with a pavilion in World Showcase. It makes sense, seeing how many Brazilian tourists Orlando gets, but nothing has been heard since.

Monsters Inc. roller coaster at Disney’s Hollywood Studios?
This has been a persistent rumor for a long time. There is another Monsters Inc. movie coming, and the space next to Toy Story Midway Mania in Pixar Place is empty. When Mike and Sulley rode the doors along the conveyor belts in the movie, many were reminded of a roller coaster ride. A lot of fans are excited about this prospect.

More Disney Vacation Club Resorts to be built?
Disney has announced an expansion at the Grand Floridian that will cause the spa to close for about 18 months, and plans have been submitted to the county showing a tower being built on the beach area by the spa building. So we know that part is true, but Disney hasn’t announced if it will be a vacation club resort – yet.
The land next to Fort Wilderness where the old River County water park used to be has also been rumored to be the future site of a Disney Vacation Club Resort.

Personal Interactive Experiences and Games?
This one is more than a rumor, but when will it happen? Disney has announced they’re working on next generation technologies. We know they’ve been testing a Mickey Mouse who can not only meet guests but also personally talk with them. (And we may get to meet him at the D23 Expo.) We’ve also read about, and seen the concept art for interactive wristbands that will take the place of guests’ Keys to the Kingdom cards, FastPasses and PhotoPasses (Read more at dizfanatic.com). The Kim Possible World Showcase Adventure is a start, but just how soon will more technologies be added to the parks and resorts?

World of Color coming?
A spectacular fountain show called World of Color opened in Disney’s California Adventure park last year. Since its launch, fans have speculated the show may come to this coast. Could it be a nighttime show to keep guests at Animal Kingdom later? Might it replace Illuminations at Epcot? The latest rumors say it may be added to the Downtown Disney lake for all to see free. Will it be placed in some other lake, or will it come to Disney World at all?

Updated Imagination Pavilion at Epcot?
Fans have been wanting the Journey into Imagination with Figment ride to get a update just about since it changed from its original state. The Dreamfinder recently made one-time return during the Destination D event at the Contemporary. Could he be coming back to Epcot in person? The Captain EO show was supposed to be around about a year and the Imagination Pavilion has no sponsor and needs a new one. With new sponsors, come new updates, and with Captain EO and the Tiki Room returning, could this ride be the next to return to its original glory?

What else have you heard? Which of these do you want to come true? What rumors would you like to start. Remember, rumors could become reality if enough fans want them to. Disney is listening.

I love all of these rumors!!!!:D hope they come true!!!
Also I love Orlando Attractions Magazine!!!!!!!
Thanks for keeping all us theme park lovers posted out there!!!!:)

bring them all Disney!!! Start off with talking Mickey and Minnie in the Magic Kingdom meet and greet. Then bring it to the regular gang :0). What i would really like is to have a Fantasy land Stage and move that stage in front of the castle it just ruins the mood when u see the castle! Make the stage like the one they have in DHS where they play Beauty and the beast just with a fantasy forest theme to it. I wanna see an alternative to MNSSHP with JACK and SALLY!! A MAgic show some where in magic kingdom. Bring a magic shop to main street. I have more lol

Love the fountain idea for animal kingdom, it’s the only park so far that doesn’t have a nighttime spectacular, and a fountain won’t be loud scaring the animals

I would be very excited to see an expansion in Animal Kingdom and a new country added to Epcot!

Yes PLEASE bring back the Adventurers Club! Disney night life has suffered because of its closing. Kungaloosh!

I still wish they would expand the monorail system to Hollywood Studios, Animal Kingdom and Downtown Disney.

All of these rumors sound good to me especially the Adventurers Club. It would be great to have another Country & a night time show at the Animal Kingdom – more must see’s at Disney…..

Out of the mentioned rumors, I’m pretty certain that although the GF DVC expansion is 100% reality, they will not announce this anytime soon… they need to sell what they’ve got before doing so.

I sure do hope that the Monster’s Inc. coaster has some truth to it, that is long overdue and would really alleviate Toy Story Mania congestion.

World of Color at WDW is a MUST in my opinion, and I know I won’t be too popular for saying this, but I could care less if they ditch Illuminations to make it happen. It’s boring IMO.

And as far as all of the other rumors go, it will certainly be interesting to see which of these come to pass. I sure hope they would also return the MSEP to Spectromagic already. That is one announcement I can’t wait to hear take place. 🙂

Hello would you be willing to share my $5 custom Mickey Mouse animation gig to your readers: https://bit.ly/mickeytoon

It is really great for anyone who might be going to Disney World and needs a custom message from Mickey! Cheers!

Animal Kingdom is getting an expansion, but it won’t be about mythical creatures, they already thought about that while creating the park, and decided to put Camp Minnie-Mickey in that spot instead. As for an Australia land, would be pretty cool, but Disney is making a land inspired by the movie “Avatar.” If there is going to be a new country at EPCOT, it should be Switzerland, so they can design a Matterhorn Bobsleds. They have to expand Pixar Place at Hollywood Studios, 1 amazing ride and a meet and greet, they need at least a ride and a restaurant. For World of Color, in my opinion, they should move Fantasmic! to the Magic Kingdom’s Tom Sawyer Island (like in Disneyland), and have World of Color go to the Hollywood Hills Amphitheater. And didn’t they already try a talking Mickey Mouse at Magic Kingdom? (mind-blowing)

Legoland Billund in Denmark to expand with...